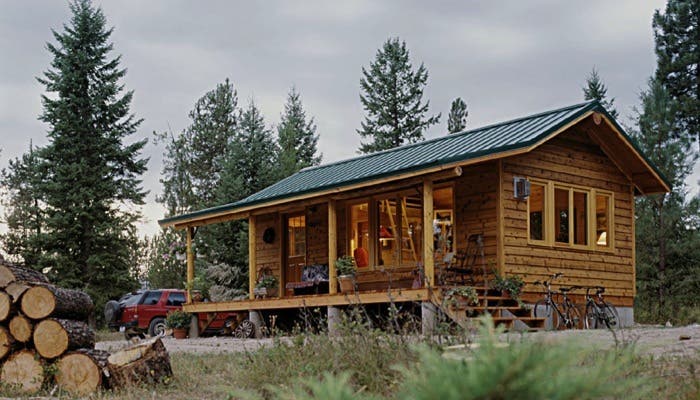 Sherpa Cabins in Thomson Falls, MT is a tiny house worth looking into. According to Kris Anderson the owner and builder of these fine little cabins quality of construction and customer satisfaction is the number one priority for the company. Here is what the Sherpa site has to say: The first Sherpa cabin we designed was intended to be an answer to an out-of-state landowner’s need for a roof overhead until eventual retirement to Montana. Or, the weekend get away spot for the city worker wanting to spend some time at their mountain property.

Unlike a trailer or RV, we felt a Sherpa Cabin would appreciate in value while providing a beautifully handcrafted, aesthetically pleasing home for the insightful buyer.

After building the shop located in Thompson Falls, Montana we rolled out our first cabin in the spring of 1999. As only previously dreamed, the first actual buyers were racehorse breeders from Florida who recently purchased land in Montana. Many, many cabins later one of two cabins built for a retiring Intel engineer was photographed by Sunset Magazine‘s Norman Plate and featured in the July 2002 issue.

Sherpa Cabins is owned and operated by Kristin Anderson since co-founder Dennis Roberts’ retirement in 2003. In January 2003 our first cabin was delivered out of state. We now have cabins in Idaho, Washington, Colorado, New Mexico, California and Montana. We were granted a Trademark by the U.S. Trademark & Patent Bureau in March of 2004.

Although our horizons are continually expanding we are stubbornly remaining a very small business. Besides Kristin, there are only two other carpenters. We build one cabin at a time, with an average construction time of 7 weeks from start to finish. Our goal continues to be to build and deliver the best small cabins in the industry. As we so often hear, “this cabin is a work of art!” In a world that seems to continually lose its appreciation for quality and craftsmanship we strive to maintain our own in each Sherpa Cabin we build.

To listen to an audio interview with Kristin and to see more pictures of the Sherpa Cabins click here. We do deliver to AZ. If you could check out our website: sherpacabins.com there is a section on pricing. Please let us know if there is anything we can help you with.
Thanks
Sharon

i love small spaces and i like what i see here . i live in va. and would like to see where in va does anyone have tiny houses . thanks

Great ideas, if you don’t want to repair the old house build a new one and get out of the rat race. keep up the good work! I subscribed to your blog. Get me out of California, it s too expensive.

As I search for houses, I stumble upon your blog. Lovely pics there! I love staying at cabins. Feels so comfy. It’s a good place to relax actually especially if you are stressed at work and need some space. Cabins (mountain property) is a place to be.

ya i love small cottages. As i live in (Annapurna circuit Manang)Nepal tourist area and wanted to build new small cottages for tourist. If u have more pictures please send me some of them.
Thanks

Wow this is exactly what we have been looking for

Picture link is broken. I keep getting errors.

I keep getting errors, too.

They are closed now. They retired. No more Sherpa cabins.

Do you deliver to Georgia.
Wow, I like these houses.

can you deliver to Northern Minnesota ?? thank you !

I would contact the company directly as this is just a report on them.

Now this is the perfect house!! Loved It!