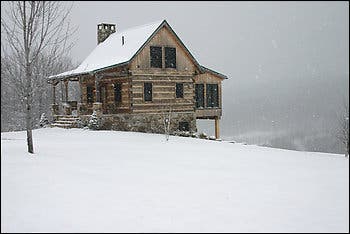 It Was Once a Children’s Playhouse, and Is Not Much Bigger Now

The tiny hand-hewn log cabin not far from Deep Creek Lake looks like it’s always been perched on its windswept ridge above rolling fields and forests. As smoke pours out of the chimney and snowflakes swirl, it’s hard to imagine that the little house came within hours of being bulldozed into oblivion in a county nearly three hours away.

After being salvaged, moved and improved by Kelly and Rick Stieff, the cabin has a new lease on life as a weekend getaway. The Leesburg family, including four offspring ages 16 to 27 — two children are hers, two are his — gather there year-round to hike, kayak and fish. This time of year, the main attractions are skiing and snowboarding, starting right outside the cabin. Spruced up with radiant-heated chestnut floors, fieldstone fireplaces, a spa bath and built-in racks for Uggs and ski boots, the house — bigger now, but still compact — packs a lot in.

The cabin’s odyssey began six years ago when Kelly Stieff, who had long wanted a place in the country, dragged her husband to the Log & Timber Home Show in Chantilly. Wandering among the exhibitors selling newly built log homes and all the building materials and furniture to go in them, they got wind of the sad story of a one-room hand-hewn house of white pine and hemlock about to be demolished to make way for a housing development.

To read the rest of the story and see a neat slide show of the house click HERE.

Very cute… but I’m thinking this:

may be even smaller than yours!

The link above has moved to this spot:

The tiniest ski lodge is in danger. The huge property next door could be developed. We are scrambling to figure out how to buy it, but honestly it is way beyond our means.