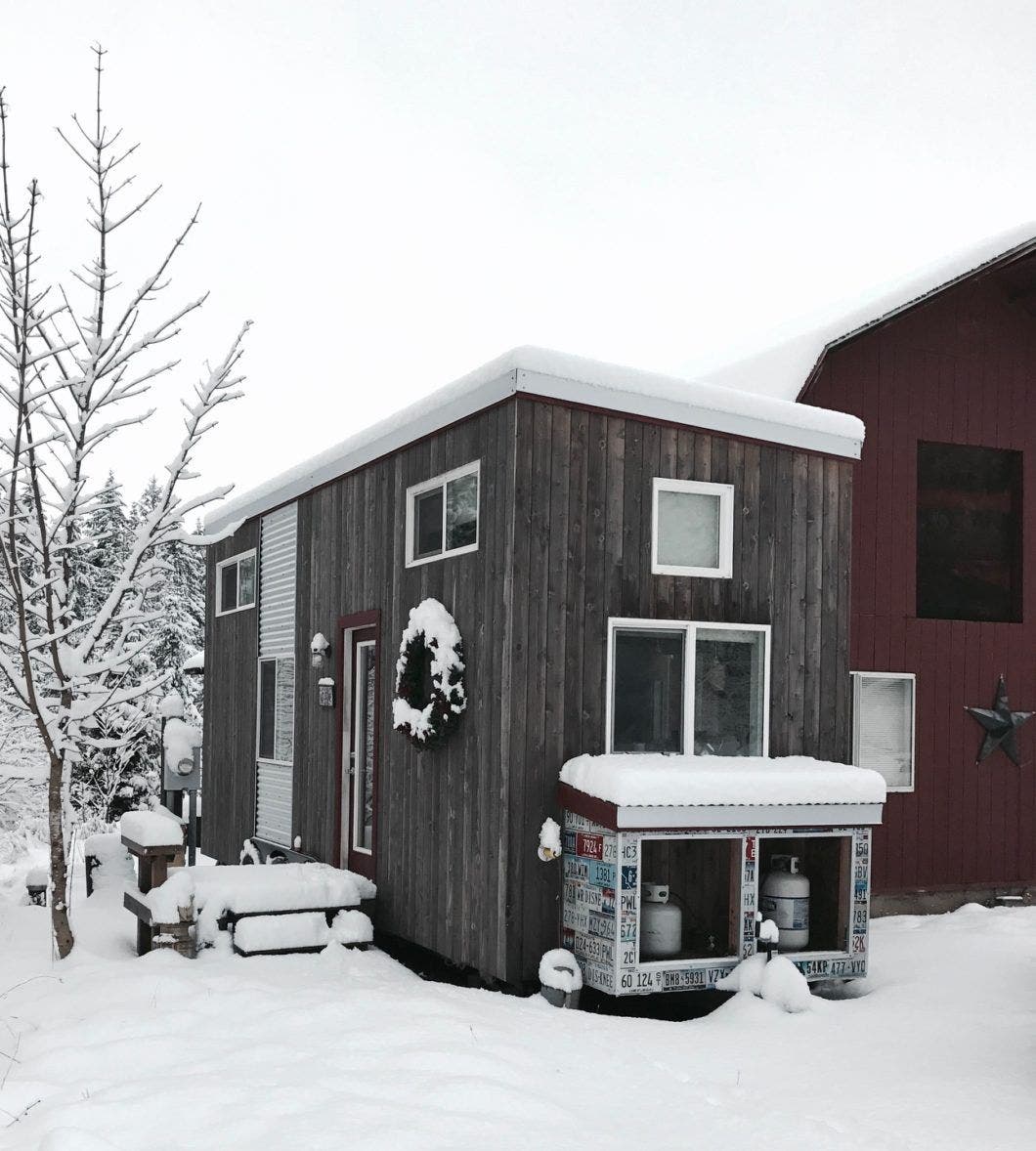 The Good, the Bad, and the Ugly

Not once, not twice, but three times in the past two months the Portland Oregon area has gotten hit by snow storms. First, the city and school districts learned the lesson that even an inch of snow will affect the commute. Second, they learned that road salt is our friend. And, third, we all learned that sometimes staying home and hibernating with wine and Netflix is a much better idea than putting our life at risk by driving. Anywhere.

There was, and remains, much ado about tiny houses that are used as full time living quarters in cold climates. While Portland Oregon would hardly consider itself a “cold” climate we’ve all gotten a taste for what it would be like, if it were, and we’ve learned a few lessons of our own. After spending a few weeks in sub-freezing temps I am hardly an expert and there is so much more I could have done (and would have) if I was anticipating living on these conditions for longer. Some of what I did to, however, worked marvelously and some of the things I did were not enough to prevent my pipes from freezing. Upon hearing even the first rumor of freezing temperatures I set about buying and installing heat tape on my source hose. I don’t have anything fancy, no RV hoses, no inline water filters (but will be getting one in the spring) just a 25 foot long heavy duty garden hose. The heat tape comes in several lengths, including 30 foot, so I could have extra to wrap around the well head and that, as it turned out, was a great idea. First I started on the not-plug-in-accessible end of the hose and laid the heat tape on the hose and I attached it by using electrical tape every 6 inches or so. Next I used 1” foam pipe insulation which came with a sticky side which makes closing it together so much easier. Well worth the extra money! Then I wrapped the remaining heat tape around the well head. I cannot take credit for what my landlord did next. Realizing that his “freeze proof” well head wouldn’t be, if it were on (which is required for full time use of a tiny house) he wrapped thick paper insulation materials around the well head and put a garbage can over it.

RESULTS GRADE: A – No freezing but it is somewhat inconvenient to unwrap the well head when I need to use the 2nd hose for emptying my composting toilet / liquid waste tank. However, that is certainly a small price to pay for an effective and insulated water source.

I don’t give nearly enough credit to my builder, and boyfriend, Mark for the outstanding job he did of framing my tiny house. It is a sturdy structure and the roof has been holding almost a foot of snow for a week now and shows no signs of weakness, leaking, or heat loss. The joists are 2 x 6’s framed 16” on center and this is certainly way more than was needed, but effective. The roofing materials I installed included an ice-and-rain underlayment which would prevent water from seeping through any tiny holes in the corrugated roofing, and into the ceiling insulation. I used fiberglass insulation in the ceiling (R20) and although my lack of venting may still prove to be problematic, I’ve seen no issues with moisture build up and no proof, whatsoever, of heat loss through the roof.

RESULTS GRADE: B+ – I am giving myself this grade only because I’m still nervous that without venting in the roof cavities, humidity / moisture build up may result in a full ceiling tear down and rebuild eventually. I am taking other steps to mitigate it but cannot give myself an “A” here given that the final “effectivity” results are still pending. During the worst of the weather system, it was 15 degrees outside and 50+ inside. The colder it is, and the more opportunity there is for cold and heat air meeting, the more likely humidity will rise in your tiny house. When I opened the downstairs blinds one morning, there was a thin layer of ice on the INSIDE of the windows. The blinds had captured the cold air coming in and froze it against the window. Of course, then the room temperature melted the ice and created moisture against the windows. I wiped it with a cloth, turned on the ceiling fan, turned on the bathroom vent fan, and within 20 minutes the windows were clear of all moisture. Not knowing, however, if that would be enough, I also bought a temperature and humidity monitor which helps me to keep tabs on when I need to turn the humidify fan on and the net effect of cooking, and being in the tiny. (I purchased and highly recommend a humidity sensing fan but have not figured out how to install it yet. Another spring project)

RESULTS GRADE: B+ – I think I’ll give myself an “A” once my manual interference is no longer needed to control the moisture fan.

My friend recommended a propane tank monitor that connects to my iPhone via Bluetooth. It works amazingly in the “normal” temps and takes away the nervousness of not knowing when I’m going to run out and keeps me abreast of how much I am consuming on a day to day basis. However, when the propane tanks get ice on them it forms a layer between the monitor’s magnet and the tank and sometimes gives a bit of a false reading. For instance my small tank read “45%” this morning and I know it’s full and has not even been cracked open for use since I filled it last week. When the difference between warm and cozy and freezing my butt off, knowing how much propane I have and when I need to go get it is VERY valuable information. Even if I have to second guess it at times because I have not purchased blankets for my propane tanks. Yet.

RESULTS GRADE: A – The monitors work great but I wish they were a bit more reliable when it really counts.

As I mention in my intro, despite all of the steps I took, my house pipes did freeze and I slept on the couch at my children’s house for 3 days while I figured out what the problem was. My water system is divided between 3 sections (well head, source hose, and plumbing) so diagnosing the loss of water involved disconnecting each one and testing it individually for water flow. I discovered that the house pipes were the problem and, more specifically, the cold water pipes leading to the kitchen sink. Although I thought ahead and added an access panel which provided full access to the incoming line on the back side, I also was storing a box against it. That box, and the panel cover, prevented ANY household heat from reaching the pipe. And although it ended up being a very small frozen section of pipe, void of any damage, and resolved by heating the kitchen with the cupboard doors open, it shut off all water to the entire house. It really wasn’t a plumbing or insulation or a heating issue, it was a learning curve opportunity for sure.

RESULTS GRADE: A+ – I may have had no water for 3 days but even when frozen, my PEX plumbing pipes didn’t have any damage / leaks. I was so anxious about this and am SOO glad I don’t have to tear apart my kitchen to fix a leaky water line.

As much as the roofing insulation has affected the heat retention of the house and is worthy of mention, my 14,000 BTU vented propane furnace by Williams Control really takes the cake and has done an amazing job of heating my 204 sq foot house easily and effectively. I am going through about 10 gallons of propane every two weeks for heating water and cooking and heating the house(even in these frigid temps) and that amounts to less than $2 a day.

My hot water heater has been acting “clunky” lately and won’t always come on when I need hot water. It always will, after a few tries of turning the hot water on and off; but since “on demand” hot water heaters are supposed to operate “on demand” and not “eventually” I placed a call to my hot water heater guy. His first concern was that my propane pipes were not sized correctly. I reminded him that my hot water heater has performed flawlessly for over a year now. He asked me to take a pic of the regulator and suspected it would not perform well in the super cold temps. But, it wasn’t until I’d spent an hour in quiet-contemplation-yoga-class that the light bulb of realization came on! What had changed was that I was commonly running the hot water heater at the same time as I was running the furnace. (in the morning for my shower) I wondered if taking the additional step of turning off the furnace for the few minutes of my shower would fix the temporary problem. It did! My hot water heater guy says my fix makes totally sense because it takes a LOT more BTU’s to heat the super cold water than “normal”. The pilot light remains on so it’s an additional morning routine thing I have to remember when it’s super cold outside but, again, these cold temps won’t stay long. And thank GOD that’s true because I’m really tired of snow!

RESULTS GRADE: A – I figured this one out, all on my own, and although a bit inconvenient, the extra step I take when I shower is a small price to pay for a hot water heater than runs flawlessly 99% of the time.

MJ Boyle,
Very detailed and interesting information. I live in Michigan so your blog about winterizing your tiny home caught my attention. Thank you. Wendy

[…] get down to specific tiny home-related weather issues. When designing your home be sure to take into account the potential for freezing pipes in the […]