The Builder Generation Takes Tiny Into Their Own Hands 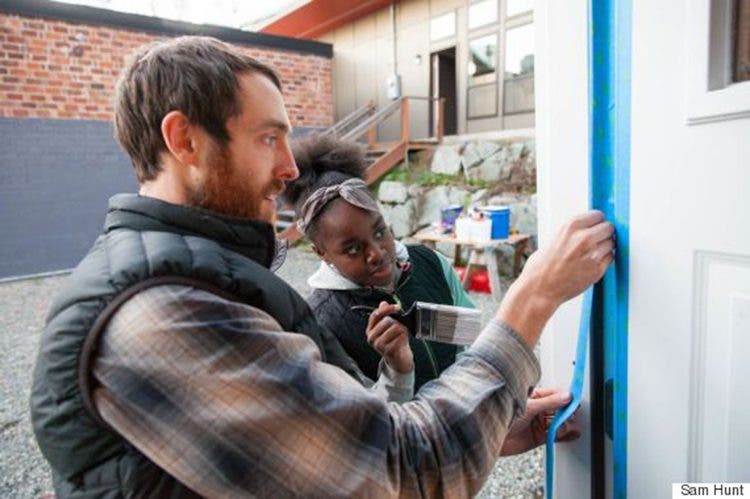 “Don’t worry if people think you’re crazy. You are crazy. You have that kind of intoxicating insanity that lets other people dream outside of the lines and become who they’re destined to be.”  The author Jennifer Elisabeth in her book Born Ready: Unleash Your Inner Dream Girl could very well have been writing about Maine Coast Waldorf School’s senior Lila Bossi. Recently reported on by the Portland Press Herald, Bossi, a high school senior, is building a tiny house on wheels out of donated materials construction scraps, and salvage/yard sale finds. Her build doesn’t come without some personal sacrifice though as she used her “life savings” of about $3,000 to purchase a custom-fabricated 16′ x 8′ flatbed trailer from On the Road, Inc. for the foundation. Says Bossi, “I really didn’t want to skimp on that because it is going to be holding a lot of weight, and I figured it should probably be new.” Wise thoughts for an upstart. This idea of teenagers building tiny houses is not entirely new although it is still seen by mainstream press and the tiny house community at large as a bit of a novelty. In fact back in 2010, then high school freshman Austin Hay began building his own 130 sq.ft. tiny house. After him Whidbey Island teen Celina Dill took to constructing a 10′ x 18′ and 14′ tiny house. Then in 2014 Georgia teen Sicily Kolbeck finished up on her La Petite Maison tiny house. There have been several since then including entire school groups. This one idea keeps coming to mind though.

“Working hard is great, being lazy sometimes is great, but failed potential is the worst.” Actor and Director Campbell Scott expresses it perfectly. His statement is the exact reason I feel these teens are not exceptional but rather are re-defining. Lately the press has ridiculed those 35 and younger stamping labels on them like Millennials and post-Millennials, the IGeneration, and more, saying they lack ambition and lack even the basic skillset their parents had. Being one of “their parents” I refuse to believe this. A year ago on Forbes.com, Micah Solomon wrote about the 5 key traits that Millennials share between themselves.

Some pundits have tried to label this post-Millennial generation as The Founders which is absolutely wrong. By definition founders establish something. What I believe we are seeing and what started with Hay and Dill and Kolbeck and is continuing with Bossi is the creation of The Builders generation. They are mapping out and building a future we are all trying to imagine. Like the trailer Bossi spent her life savings on, the foundation is in place; the concrete set. Now it is time to build. We know the planet cannot sustain life as we currently live it. We consume too much. We waste even more. We still hold on to the antiquated notion that bigger is better and that a home cannot transform a life. But that just isn’t true and we need a generation to build up on the foundation Jay Shafer and Dee Williams and so many others laid.

In a 2012 video shot and edited by Kirsten Dickson of *faircompanies she asks Hay, “Do you think anyone can build their own house?” Hay responds enthusiastically, “Oh yeah, they just have to put their mind to it, and that’s what scares people. That and it’s hard work.”

Are you up for the hard work? Are you part of the Builder Generation? Are you just a builder? What are your thoughts? Let us know in the comment section below.