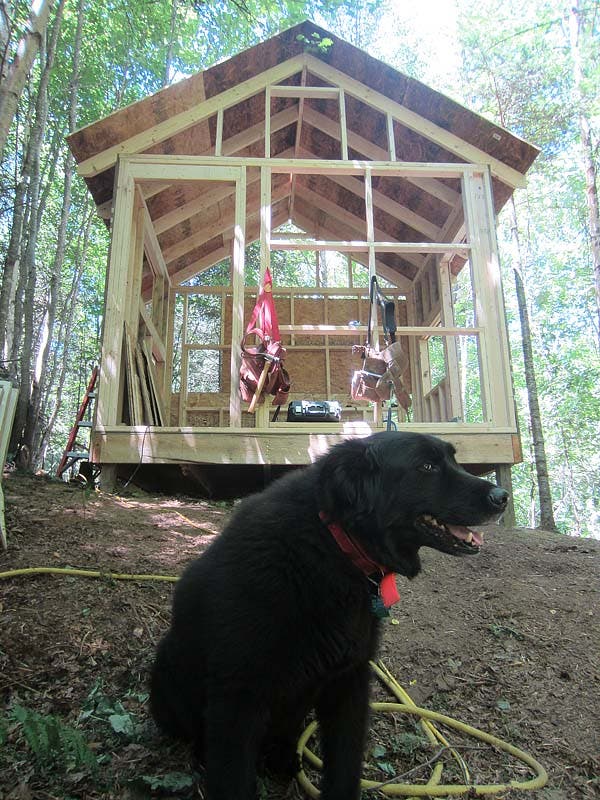 Well, since I’m somewhat caught up on rest from five days in the backwoods of Vermont, and with four of those days being our Relaxshacks.com “Tiny House Summer Camp,” I thought I’d share some photos with you…..NPR, Vermont Public Radio, and Make Magazine were also represented out at the site, so you’ll also be seeing more photos from them down the road, and some video….

(Day 3) on what will eventually be called “The Rockhill” cabin. Bill Rockhill and his son Billy busted butt on this project, and well, it also is on a hill, and next to a ten ton rock, “Rock Hill.” The name has as nice ring to it too….ALL of the windows we fitted for this were FREE: found, scavenged, and/or donated.

I might also add that this SOLD OUT workshop was an unbelievable amount of fun, and we worked on not one, but TWO tiny houses/cabins in the woods, where all involved got to not only help with building these structures, but helped DESIGN them. It was a pretty open canvas. Framing, roofing, post-hole digging and joist/floor frame setting, site selection, and beyond, we covered a very wide array of related subjects, both first hand and in our campfire discussions at night. We also took field trips to Mariah Coz’s Comet Camper, Uncle Bob’s Log Cabin (off-grid/solar), The Goodridge Lumber Mill (they’re AMAZING!), The Pine Crest Tiny Cabins (www.pinecrestmotelandcabins.com), and also got to see (and some got to stay in) my stilt cabin, my U.B. 30 Treehouse, The Hickshaw micro-cabin, and more!

By the way, Goodridge Lumber, as many ask, is where I buy almost all my lumber for my projects. I often tell people in the Tumbleweed Workshops to develop a relationship with a local mom n’ pop mill, while building your tiny house, as you’re guaranteed to ultimately get better wood, better service, and better prices (WAYYYYYYY better, in this case). Your local lumbermill will soon get to know you, your tastes and your needs. A huge chain store just won’t care. The end of the camp weekend, we shot this photo.

We got a lot done, considering we were mostly working off-grid in the middle of nowhere, AND taking some field trips and hikes to other tiny houses sites, all in between.

Anyway, long story short, it was a blast, and a huge success, and we will have another either in Vermont, and/or at Bill Rockhill’s Bear Creek Carpentry HQ in the Adirondacks.

OUR NEXT WORKSHOP….OUTSIDE BOSTON, MA
I also plan on having another small workshop in MA (10 miles outside Boston) in the late fall, and for any interested, kidcedar at gmail dot com. I’ll have more info soon enough. November 2nd weekend looks like our best bet which will mean nice, cool temperatures, thus warranting a bonfire at night for discussions. We’ll have guest speakers, demos, actual building (a collaborative project), and then some… As it stands now, it looks like it’ll be a two day, one night affair, with the possible option of having people arrive on friday for some campfire cooking and discussions. Our last two workshops have sold out pretty quickly, and we like to keep the groups small, so email me now if you want to lock in a spot. We’ll probably set the cap at 15 or so heads.

Many of the photos you see above, will also end up in the follow-up book to “Humble Homes, Simple Shacks” picked from among the thousands of photos I’ve taken over the last year or two. I can’t wait to share some of the cool things I’ve photographed and seen, first hand, down the road.

Anyway, THANKS to all who came, and to all who helped out in Vermont.
A special thanks to the following…..

Bill Rockhill and “Bill 2” from www.bearcreekcarpentry.com
Kent Griswold from www.tinyhouseblog.com
Kevin Harrington from www.cozyhomeplans.com for his behind the scenes support
Steven Harrell from www.tinyhouselistings.com
Jon Kalish (and Pam)- NPR Host/reporter for Make Magazine
Janice Kenney- owner and dweller of/in “Tumbleweed 2” who spoke about her lifestyle.
Dustin “Dr. Demolition” Diedricksen, for his help as another one of our instructors
Mariah Coz of www.cometcamper.wordpress.com
Alex Pino of www.tinyhousetalk.com
Jay and Taryn of www.pinecrestmotelandcabins.com
Colleen and her crew at www.goodridgelumber.com
“Uncle Bob” Bennett- for use of his family’s solar log cabin in the woods. […] the full story at “Tiny House Summer Camp”. /* This entry was posted in Workshop and tagged Deek, summer camp, Workshop by […]

great report and good to see people enjoying themselves as they learn.More power to your elbows as we say in the UK

Looks amazing, I hope I can make it to the next one!

Thanks All- Thanks Abel- I might be seeing you at Yestermorrow’s 2013 workshop as a speaker/ presenter apparently….hope you’re well!

PS- The Next Relaxshacks.com Tiny-House Building Workshop will be held in MA, right outside Boston, Nov 2-4, Relaxshacks has the details, with a list of speakers, and a little on the group guest house we’ll all build.
-Deek

It’s a pity you don’t have a donate button! I’d definitely donate to this superb blog! I suppose for now i’ll
settle for bookmarking and adding your RSS feed to my Google account.
I look forward to new updates and will share this site with
my Facebook group. Talk soon!

[…] live in maybe-land. Give it a live test by spending your summer in a tiny living space: explore the great outdoors, take the fam’ fishing, or just sink your feet a little deeper into […]