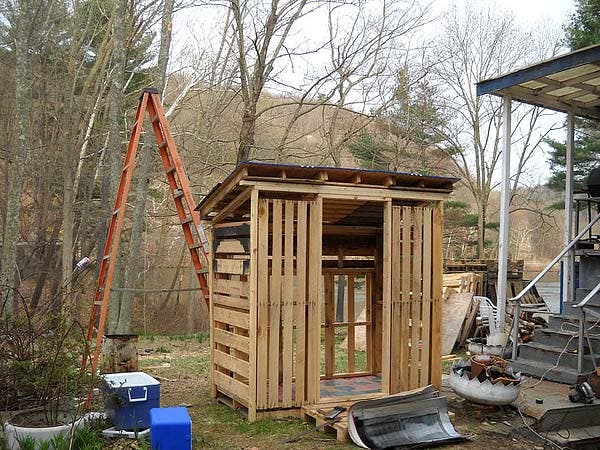 I have been a follower for many years now and wanted to take the next step and contribute. Around the same time I stumbled across your blog, I began experimenting with shipping pallets. Being a carpenter by trade, I already possessed the skills to build, but pallets are a whole different ball game. When building with pallets, one cannot just draw up plans and expect everything to work. Pallets need to be looked at as building blocks, like Legos for example. Drawing up plans is still a good idea, but the dimensions and structural integrity of pallets needs to be the main factor in design. Before, I started building; I needed to find sources to obtain my pallets. The most common pallet can be found behind almost every store and it measures 4ft by 45 inches. It consists of 3 parallel 2x4s with 1x planks running perpendicular. These pallets are normally reused over and over and are riddled with nails. The wood is grade “d” lumber at best and is hard to drive a nail into. However, there are treasures out there; I have found many mahogany pallets and oak pallets. With some dedication, the wood can be reclaimed. There are also pallets that I call, “one time use pallets.” These have all different dimensions that are based on the product that is being shipped. For instance, Motorcycles, Tractors, wood stoves, windows, furniture…etc, all have unique pallets. A lot of these pallets are constructed out of premium 2x4s and 2x6s, all held together with screws and bolts. This lumber can be reclaimed much easier and even hardware can be reused. At a local glass company I can gather 8ft x 12ft pallets, all made out of southern yellow pine. NOTE: Always get permission before taking pallets, some have deposit costs attached to them. After collecting a dozen truck loads, I had enough pallets to begin experimenting. I took an inventory of what I had and recorded the individual dimensions of each pallet. I also took note of which direction the 2x4s ran, being that they are the main support. I had seen a couple people attempt to build chairs out of pallets online, so I started with that. The first one I built was just to get an idea of what I could do with the least amount of work. The next involved a little more effort and the third was actually built by deconstructing pallets and reusing the wood. From what I learned in making chairs, I took my new knowledge and attempted to build a small structure. At a Harley Davidson dealership I found a 4 ft x 8 ft pallet made of 2 x 6s and heavy 1 x 6s. I used this as my base. I covered it with a sheet of plywood and leveled it on top of cinderblocks. Then I began to frame the walls. For the back wall I used another 4 ft x 8 ft pallet made of 2 x 4s. I cut a 4 ft x 45 inch pallet in half and stacked this on top. The front walls were constructed out of two 2 ft x 6 ft pallets with a door opening between them. The side walls were made of heavy duty 3 ft x 3 ft pallets that had 4 x 4s holding them together. I added some reclaimed 2 x 4s to finish the rough framing. The roof was made of three 5 ft x 45 inch pallets, and then covered with plywood. The roofing is actually made of sheet metal from a newspaper printing facility. A raw piece can be seen in front of the door opening on the ground. I constructed a door out of reclaimed 2 x 4s and added a recycled window. From a demo job at work, I got a truck load of foot wide pine floor boards. They were already stained and had a nice weathered look to them. I nailed these to the frame as siding. Since pallets aren’t perfectly square, neither was my structure, so some custom skill saw rips were needed to make the siding work. I then attached some more 5 ft x 45inch pallets as a second foundation to the back and leveled them on cinderblocks. Using more reclaimed lumber I built another frame. Then roofed with more pine floor boards. At this point, I decided to make my structure into a chicken coop. This new section would act as a covered run for my chickens. I built a larger run out of more reclaimed 2 x 4s and wrapped everything in chicken wire. Other than some hardware and two sheets of plywood, the entire structure was made of recycled materials. This was last spring’s project and since then I have been collecting more raw materials. This spring I am going to attempt to make an 8 ft x 8ft structure out of mostly pallets. As soon as I have something made, I plan on showing it to all of you at tinyhouseblog.com. If you have any questions or want to talk pallets, feel free to contact me at artcalderone@hotmail.com.

Nice to see someone close to where I live involved in tiny living experimentation. Very interested in the Adirondack styled chairs that you’ve made out of pallets. I’d like to play around some with that idea as well. Thanks for sharing your work.

Do an online search for shipping pallets and toxins before you get too ambitious with pallet repurposing projects. This blog post (that I just found with a quick search – no connection to the post or poster) highlights concerns http://www.poetichome.com/2010/08/30/toxic-exposure-the-danger-of-repurposing-pallets/.

We don’t live in a small house (3000 square feet), but our gas bill is $17 a month even when the temps are -20. We have an engaged greenhouse and a three story lay out with a wood furnace (will be woodgas someday) on the bottom. I hand saw cut local dead cottonwood. The gas furnace has not worked in two years, someday I may fix it. Keep the house around 70. Why don’t more tiny house plans have a quick engaged green house set up on one long south facing wall? This is not a new idea since our home was built in ’78.

I’m going to do exactly this with an earthbag home that I’m planning on building in Northern Florida. A lot of earthship homes work off of this principle with a greenhouse on the south side so I realized that the same could easily be done with an earthbag home. My home, when finished will probably be larger then I had envisioned but that is because of the greenhouse. Still, this is a workable model and I only know of one guy who had created a tiny home with a greenhouse.

I had a good friend and his wife died from the fumes of him sawing pallets in the basement. Don’t burn pallets or be aware of what they were used for. I do avoid using pallets at all. Not all pallets are bad, but it is like playing Russian Rullet! Your chicken house set up reminded me of your engaged greenhouse. A prime source of free timber is your local brush recycle or dump site. I live in Montana and have access to more ash, elm, chokecherry, cottonwood, box elder, & more in one week than a wood worker could use in a month. There are plans for solar wood curing sheds online. A much better way to cure timber.

People in towns pay to have limbs and trees dumped. I get odd looks as I help myself to what they just paid $6 a load to get rid of. he he

I’ve been thinking about using pallets, too, to use as part of a shanty boat. However, instead of using the boards as planking, I’m thinking of gluing them together to create “blocks” which could be assembled into a supporting structure.

Im not exactly sure what you mean by “blocks”. Id love to be able to help you, if you explain more. feel free to email me drawings, artcalderone@hotmail.com

I also live in CT and I’m wondering if you had any issues with zoning or codes. I’ve been dreaming of a natural built home, but everything I’ve read states that New England, and the northeast in general is not very open to building with natural renewable or recycled materials. I would be interested to hear about any experience or opinions you may have on the subject. Thanks!
Melody

I am in CT also and I just wanted to say hello to the other tiny house people from our tiny state and the New England Area. I have heard Maine might be tiny house/etc friendly but brrrrr and it has pretty short on the growing season! That being said my brother lives in Vermont and he can build pretty much anything he wants – the people up the road from him have even dug into the mountainside for their place(but they do not live in a city/big town.I might just go up there to build a tiny house (possible tumbleweed-style) since he said he would help me.

My husband is using pallets for a variety of projects, but he is appropriately cautious, and only uses wood which is labeled HT (for heat-treated) I suspect we will used pallets soon for a small shed to house washer/dryer and freezer. I’m looking forward to it

if i sealed pallets with something would the former use still be an issue? i would assume that ones used by a grocer would have to be safe – ?? thanks for all the helpful information! the chair idea looks like a fun first project for me as well.

If they’ve been outside for a while and aren’t full of poisonous treatments they may have a lot of bugs or other contaminants in them anyway. The heat treated ones are bugfree for a certain period past their manufacture but once the bugs take over you need to de-bug them again or at least make sure you check them over thoroughly before using. Grocery pallets may or not be safe, depends on how many uses they’ve had along the way. More scary info. http://packagingrevolution.net/nc/ Just means you have to be selective and do your own cleaning as with any recycled material.

[…] only did wood collected this way already have an appealing patina — it was also stronger. Even pallets can be used for building construction, if you have a yen for puzzles and Lego construction. (Just take care not to choose toxic-treated […]