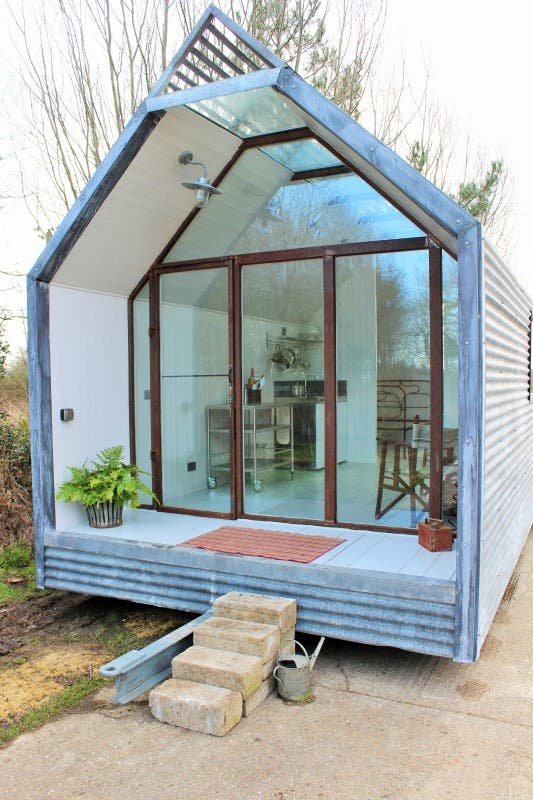 I’m a self taught builder from the UK. and with help from my father and the internet, I started building shepherds huts while working as a labourer. My first was a studio for my brother, then I got a commission to build a hut for an ancient woodland. After seeing some inspirational ideas and story’s on blogs and sites like yours I decided I could try and build a tiny house for myself. I needed a place of my own as I was living back at home and I recently finished it. But have decided to sell it instead as I’ve recently moved to London now and have no place to put it.
I grew up in the countryside, working in my dads bronze foundry, getting involved with all sorts of DIY projects and have always felt a need to be designing and building something. I’ve added some photos for you to look at. Some are of the shepherds huts, one of which is made with reclaimed materials. The tiny house which I designed with simple living in mind, thinking that I could use the opportunity to reduce the clutter of life. I wanted a building that connected with the outside and the elements, so included the large gable end window, and skylight. I also wanted a feeling of space, as tiny houses can feel quite cramped, so made sure the thing had a high ceiling and tried to use the lines of the match boarding to make it feel larger.
You probably can see that I like corrugated  iron, it fits in well with local architecture, as local barns are clad in the stuff and it ages really nicely. I patterned it with T-wash to speed up the process.
You can learn more by visiting our website here.
Best Wishes
Tom Alabaster The exterior design is very reminiscent of Dwell Homes UK.