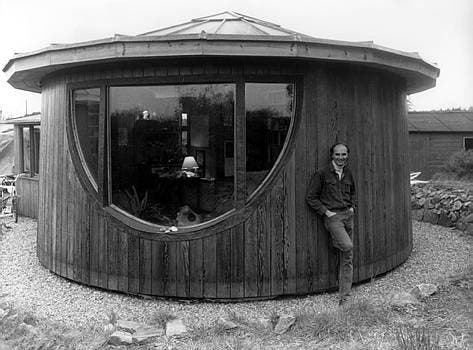 Dr Roger Doudna outside his home made from a converted whisky vat at the Findhorn Community ear Forres, Morayshire, Scotland – 1989

Here are some great examples of old time tiny house living. Get some new ideas for your own tiny house. From a whisky vat a houseboat and a Horsa glider fuselage, enjoy some neat history. Eton Rural Council has banned a number of newly built houseboats from the Grand Union Canal at Iver, Buckinghamshire. This one has been occupied temporarily by the owners until the Minister has considered an appeal against the council’s decision made by the houseboat builders – 1964 The fuselage of a Horsa glider – the type used by airborne troops in World War II – is being converted into a home for a London businessman by Mr. Arthur Bedford, a building contractor at Southbourn, Bournemouth, Hampshire. The glider-home will have three rooms – a bedroom measuring 10 ft by 7 ft, a living room 15 ft by 7 ft, and a kitchenette 8 ft by 7 ft. If the experiment is successful, the builder will convert more gliders. People baffled by the housing shortage will be able to have these homes built quite cheaply on their own sites. Photo shows men working on the exterior of the glider-home – 11th June 1947.

There’s a great article in the Oxford Mail about Maud Starkie who lived in a converted Horsa from the 1940s until she died in 2000 at the age of 99. The Mail says: “She built a shed-like structure over it for weather-proofing, but inside it was still like being in a plane.”

Thanks to Alex at Shedworking for pointing these out.

[…] A thousand blessings on Kent at the Tiny House Blog. Look what he discovered today â€” a short retrospective on tiny Euro homes. My pick: The refurbished fuselage of a WWII Horsa […]

They moved Tiffany to a new place for the first time last year, and it involved quite a bit of prep work. They first had to get Tiffany off of the cinder blocks and, like an RV, unhook the water, sewage, and electric.

Kent: Great photos! I wanted to pass them along to my readers. Like the new blog look, too.

The newest designs of small houses from budding architectural students can be seen in DC on the Mall as part of the Solar Decathlon 2009.
http://www.solardecathlon.org/

OMG, I’ve been looking at tiny houses for a few years, and all of a sudden tonight I see this picture of Roger’s Whiskey Barrel at Findhorn, Scotland. I’ve been in that house in the late 1980s. It’s so cool to see someone I know, and their home, featured in a this blog. The whiskey barrel houses at Findhorn are really cool – and so are many of the other eco houses (but many others are not tiny houses). Marcia, in the woods in California

Little Boxes On The Hill Side | QualitySmith - October 25, 2011 Reply

The little cabins here are made of VATS, not barrels. I don’t know why they call them barrels except that most people will hear the word vat and think of something else.
Whiskey is made in vats then transferred to barrels to age.

Hi Mickey, please send photos to tinyhouseblog (at) gmail.com and a little writing telling about them and I will share them on the Tiny House Blog. -Kent