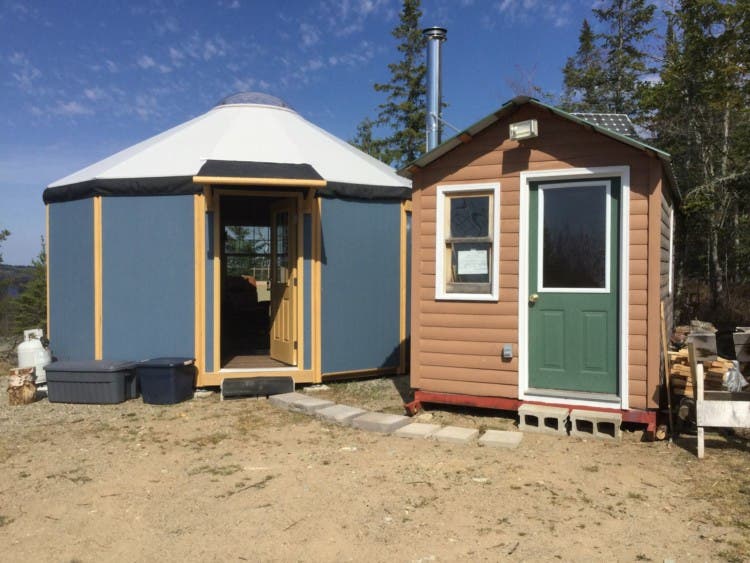 We moved to northern Minnesota from Denver when we retired. Erik had taught with Outward Bound up here for many years; I’d grown up in a mining town in Colorado; and this was affordable. So here we were.

While there’s a lot more water up here than there is in Colorado, there are not nearly as many mountains or cliffs (that pesky geology). As lifelong outdoor bums and overly-enthusiastic rock climbers, this was a troubling lack. One day, we spotted a line of cliffs alongside a dirt road not too far from town. Inquiry produced little information other than “It’s private property” of someone who didn’t live there. Vaguely disappointed, we went about our lives, but continued to long for climbable terrain close to town, and, separately, some land out of town. Three years ago, Erik stumbled across a real estate listing touting a 10-acre parcel with huge views and 160′ cliffs. The drive to check out the property showed us that the cliffs we’d seen earlier were on this land. Rock lust ensued. The 360-degree view at the top sealed the deal. We made an offer that afternoon, and it was accepted!

After housing experiments involving a small trailer, a small tent and a large tent, we decided that a Real Building was in order. Unable to convince ourselves of the relative merits of yurt over cabin, or vice versa, we stalled. Freedom Yurt Cabins in Colorado proved to have the perfect combination with what is essentially either a round cabin or a hard-sided yurt. The engineering was very impressive: the whole thing is a sophisticated jigsaw puzzle that goes together just about lickety-split. The yurt cabin arrived on three truck-borne pallets on a rainy Saturday morning. A local contractor hauled them up to the building site around 10amthe same day. The rain cleared off, and we got to work. By Sunday afternoon, the building was up. Over the next couple of weeks, blessed by the longest, most beautiful autumn anyone could remember, we installed hardwood floors, a wood-burning stove, and a rolling island that Erik built from scratch. We calculated its location very carefully, so that morning coffee is augmented by a view across Moose Lake toward Canada. Earlier in the season, we’d acquired LP-powered stove and refrigerator. They have worked flawlessly, fed by a 50-lb. cylinder which will be joined by a twin this summer. A La-Z-Boy, a bookcase and some bar stools completed the furnishings.

For short-term bathroom needs, we utilized the land roundabout us. When winter set in, tending to such matters in knee-deep snow and -25 temperatures became less than attractive. We ‘installed’ a Luggable Loo in the Solar Shack you’ll see alongside the yurt/cabin. This worked perfectly. And speaking of cold, our little Jotul stove keeps the place cozy warm, once it’s taken the chill off the building. The standard insulation package does a great job for us, even in a climate that features sustained cold temperatures. The characteristics that made this beautiful site such a flawless fit for us are what made it undesirable for many other people. It is high up, and sits on rock, the farthest south reaches of the Canadian Shield. So there is no ground water, and a well would be prohibitively expensive. Given the ubiquitous nature of that bedrock, and the thin (less than a foot) ground cover, septic fields are impossible and outhouse pits difficult.

It also has no access to electrical power without another budget-busting expenditure. As I said, perfect for a couple of dirtbags whose idea of luxury is a nice, comfy rock! Plans for this summer are, loosely speaking, to make the place completely liveable. Erik has built a sink cabinet. We’ll use carried-in water for now, disposing of it gray-water style: a bucket with a splash-limiting top will sit below the sink drain. Its contents will be given The Great Fling on regular occasions. We intend to make use of a rain barrel system as soon as we figure out exactly how to filter the contents and get them from the barrel to the sink. Our neighbors have a very workable system that they have invited us to inspect and duplicate. The composting toilet and its bale of peat moss will take up residence in the Solar Shack. (We bought this for a few hundred dollars from a good friend and neighbor. It came with the solar panel atop its roof; hence its nickname.) Augmenting the solar power system and connecting it to the yurt cabin is a major priority this summer. For now, our Aladdin lamp gives wonderful bright light. But last Christmas Eve, we needed headlamps and a lantern for cooking and reading. We’ll build a small entry way to keep most undesirable substances out of the cabin and help the floor last longer. Screens will replace the windows. While the skylight can be opened, it doesn’t have a screen, and so is not compatible with Minnesota, er, wildlife, specifically the six-legged kinds!

When we’re not building, we’ll be relaxing on the slab of rock nearby, gazing down on Moose Lake and the Bald Eagle Diner, a venerable white pine which seems to be a favorite perch for these raptors. Loons, gray jays, white-throated sparrows and gulls are also neighbors. There are also plenty of cliffs yet to be explored; trails to be discovered and brushed; and that all-day, every-day view. This has been, without reservation, some of the best money we have ever spent. It has given us a different world, a place out of reach of day-to-day chaos, a healing, calming place. The land welcomed us when we first saw it. The yurt felt the same way. It really is home.

If you would like more information on the Freedom Yurt Cabins  check out their website and/or email kent@freedomyurtcabins.com I keep going back to the idea of a yurt, but the R-value listed for these buildings does not seem enough to keep it truly warm and comfortable in a cold climate like VT or northern Minnesota. I wonder about this passage from the story:

“And speaking of cold, our little Jotul stove keeps the place cozy warm, once it’s taken the chill off the building. The standard insulation package does a great job for us, even in a climate that features sustained cold temperatures.”

Once it’s taken the chill off the building? Using a woodstove, is it 40 degrees in there every morning? And how long does it take to get to a comfortable temperature of 65? If using propane, would the heater always be on? I really would like a yurt, but this is the major stumbling block for me.

First off I think you are comparing this Freedom Yurt Cabin to a normal canvas yurt.

Normal Yurts do not have real insulation. They have two fabric sheets woven together with a bubbly layer of tin foil between, if you pay for the “insulation” package. They are, for all intents and purposes, tents. That reflective insulation only reflects heat when a heat source is running and it will not retain heat once your heat source is off.

Not only does our Yurt Cabin have R-valued insulation, but it has significantly more thermal mass than a traditional yurt because of our solid walls and wooden frame, rafters, and ceiling. This thermal mass retains heat for much longer than fabric and lattice in a normal yurt. We have a customer who lives in the Upper Peninsula of Michigan and stays comfortable in his Yurt Cabin even in -45 degree winter temperatures.

With a small, efficient wood stove, heating such a small space takes only minutes, and you should have no problem getting your Yurt Cabin to 65+ very quickly even with an efficient electric space heater.

If you have further questions about the Freedom Yurt Cabin please send me an email at kent@freedomyurtcabins.com

Kerrie , see my comment below and hopefully my friend can also comment on where and how to get a real yurt from Mongolia. I’m also certain that all the U.S. yurt makers have cold weather packages so they work in extreme climates , my friend’s is wrapped with some sort of vinyl?? material on the outside to help with cold , but they are very warm and cozy in cold winters .

Oh my gosh ! My friend , a lady all by herself is this very week moving her true Mongolian yurt she got from … Mongolia ! to her land right down the road from this yurt in the article , outside of Ely , Minnesota !
Yurts come from the coldest part of earth and they are so well insulated with sheepwool , hers has 6″” and wrapped on both sides with fabric and you can buy the extreme climate things that give even more warmth , but , in general , yurts are the one warmest structures you can live in .
My friends’ is heated with a Yotul woodstove and you can be cooked out of there in a few minutes when it’s way below zero outside .
Her yurt is also all handpainted inside by the village people in Mongolia who made it and it’s so pretty , intricate designs on all the wood posts, etc.
I’m sending her this article right now and thank you so much for it .

Wow, quiet Minnesotta. THat’s a wonderful place. And that design of the yurt speaks friendly but modern. A classic design, if I may say. https://www.simpleterra.com/yurt-kits/ can also customize yurts for the owner’s liking. It’s great