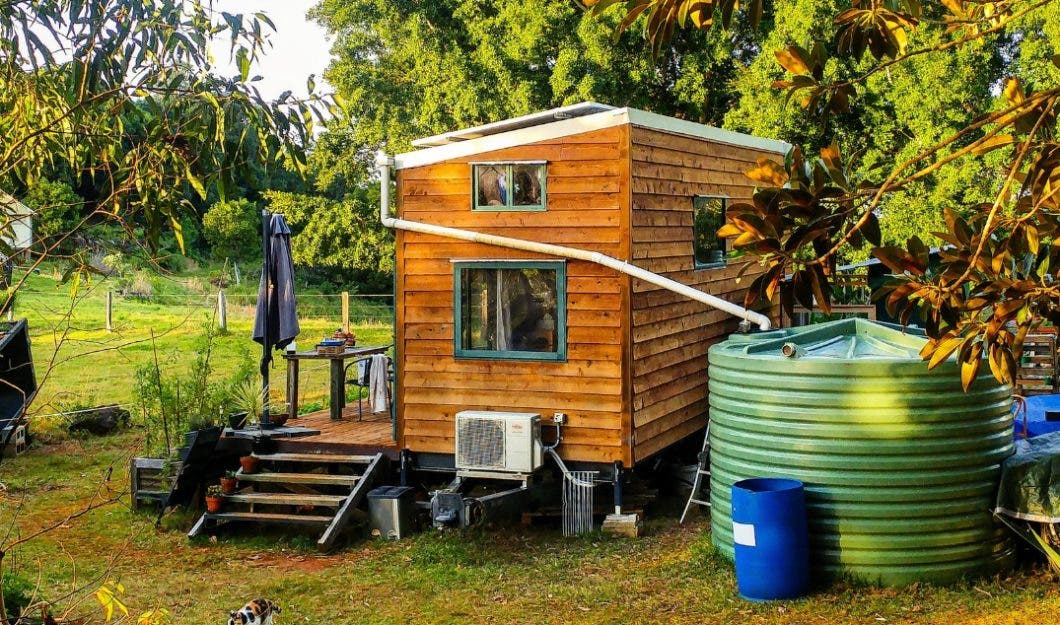 Annett and Paul have been living off solar energy, rainwater and homemade cooking gas in their tiny house on wheels in Byron Bay, Australia for over four years.

Six years ago, they took a leap of faith and traded city life for the countryside. They were driven by the desire to minimize their impact on the planet, move away from fossil fuels and make the most of Australia’s abundant sunshine. 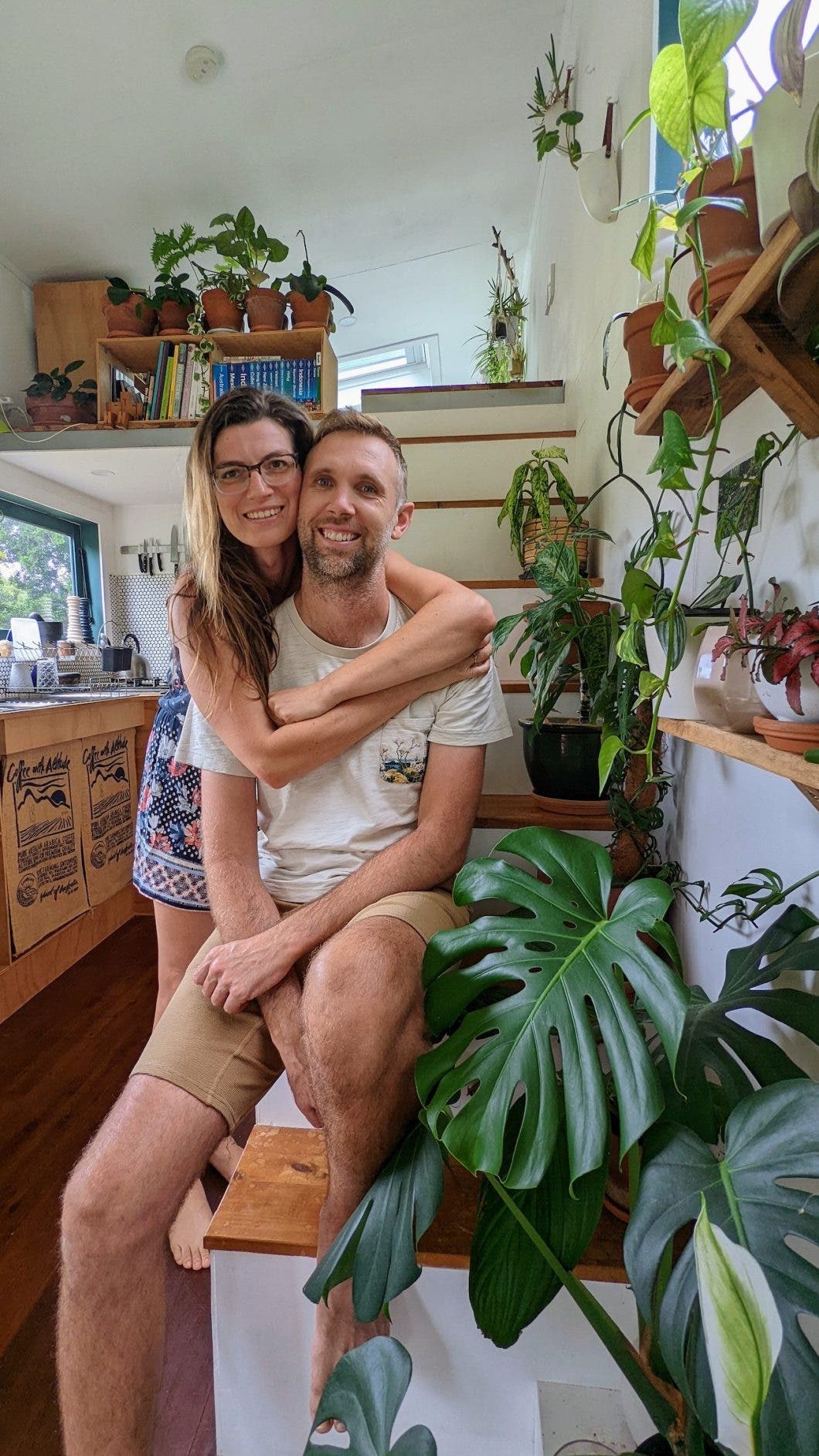 The couple built their tiny house themselves on weekends over the period of one year because of their day jobs. Since they built the house in the middle of a paddock, the first thing the couple installed was their solar panels, inverter and batteries to run their power tools.

The tiny house is not connected to the grid and there is no option to ever connect it to the grid. Annett and Paul fully rely on the sun and rain to provide them with electricity and water. So far, they haven’t run out of water and there were only a few times when their batteries got very low. So they took this into consideration and gradually expanded their solar system to adapt to the changing circumstances and to suit their needs. “After all, we don’t want to sacrifice anything and live in comfort,” says Paul.

In 2017, Annett and Paul started with only 6 solar panels which generated 1.86kW in total. The panels served them well for more than three years. But as their needs changed, especially when they swapped their petrol car for an electric vehicle, which they also charge off their solar system, they amended their off-grid setup and are now able to generate 4.8kW. As of June 2022, their off-grid setup consists of: 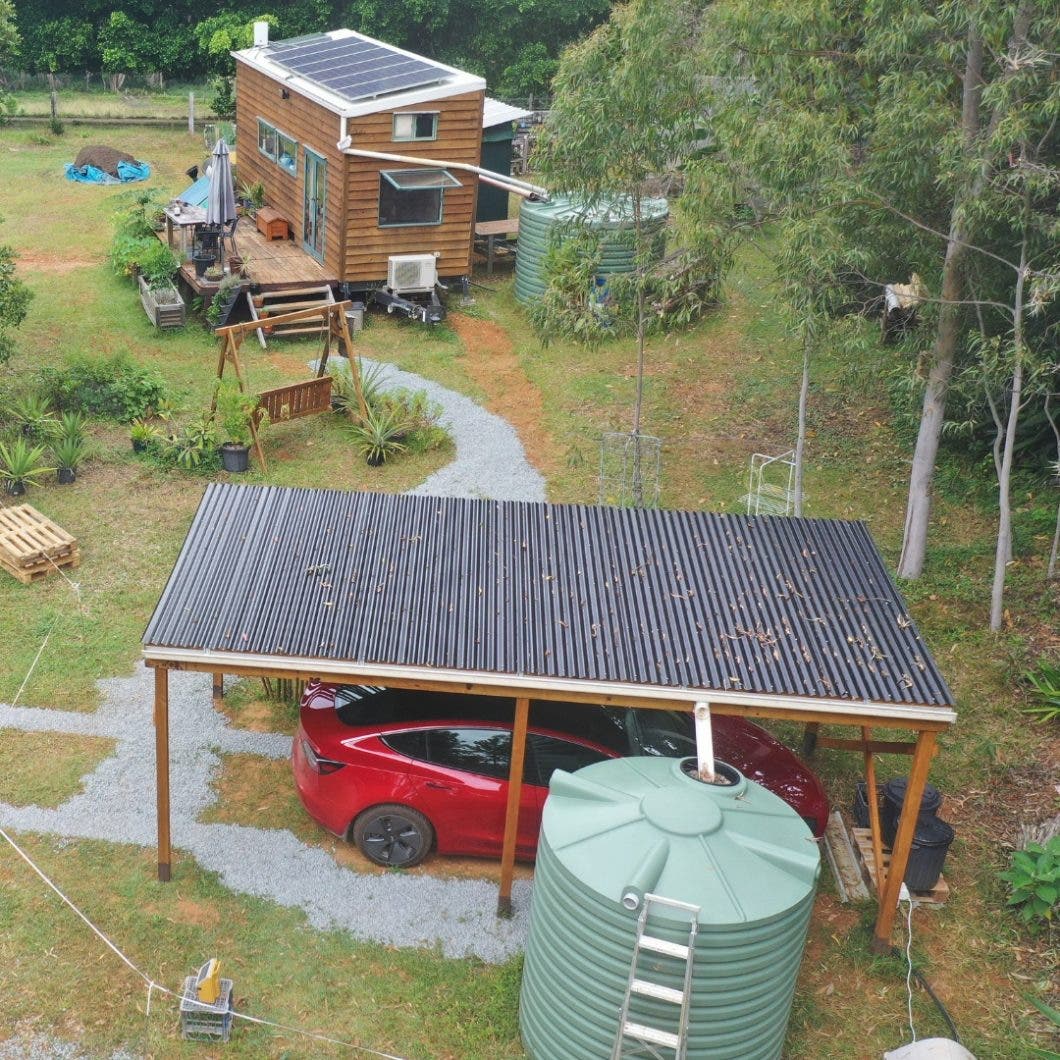 While the couples’ main power source is solar energy, Annett and Paul think that the HomeBiogas system is the perfect addition for off-grid living because the system serves three purposes for them. Firstly, they use the system to dispose of their toilet waste. Second, it provides them with cooking gas. And finally, they receive a liquid fertilizer for their garden. “We’re especially stoked about using the biogas system for our toilet waste because it closes the loop and it’s a very easy, quick and clean way of getting rid of our waste,” says Annett. “And as a bonus, we get cooking gas and even our cat contributes!” 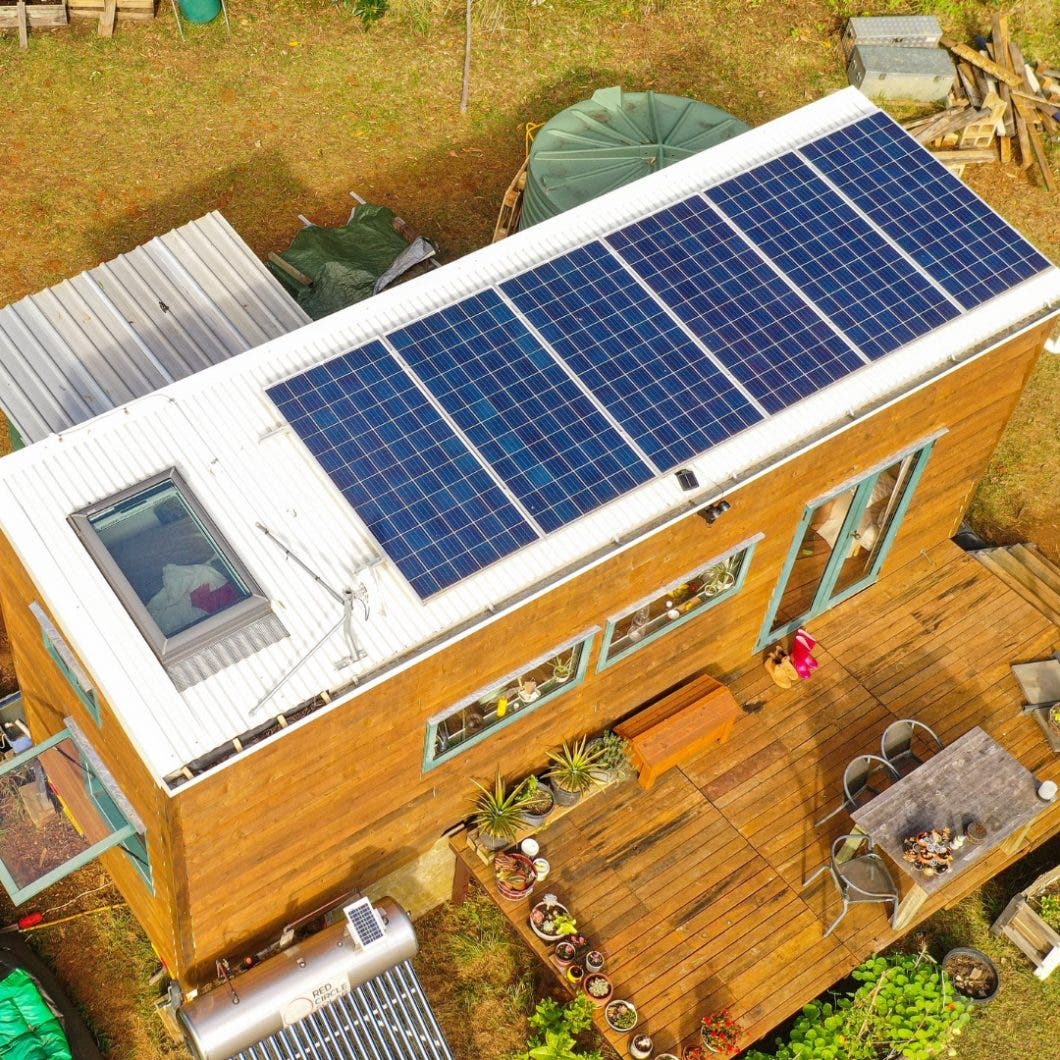 How does the HomeBiogas system work?

Essentially, the HomeBiogas system mimics a cows’ stomach. The main part of the digester is a big bladder. This bladder is filled with 1200L water, so the organic waste is completely submerged. Bacteria in the water ‘digest’ the organic waste in an anaerobic process and produce biogas. The biogas is directed into a second bladder where it is stored. This ‘gas bladder’ is weighed down by sandbags to create pressure and connected to the gas cooktop in the kitchen via a gas pipe. 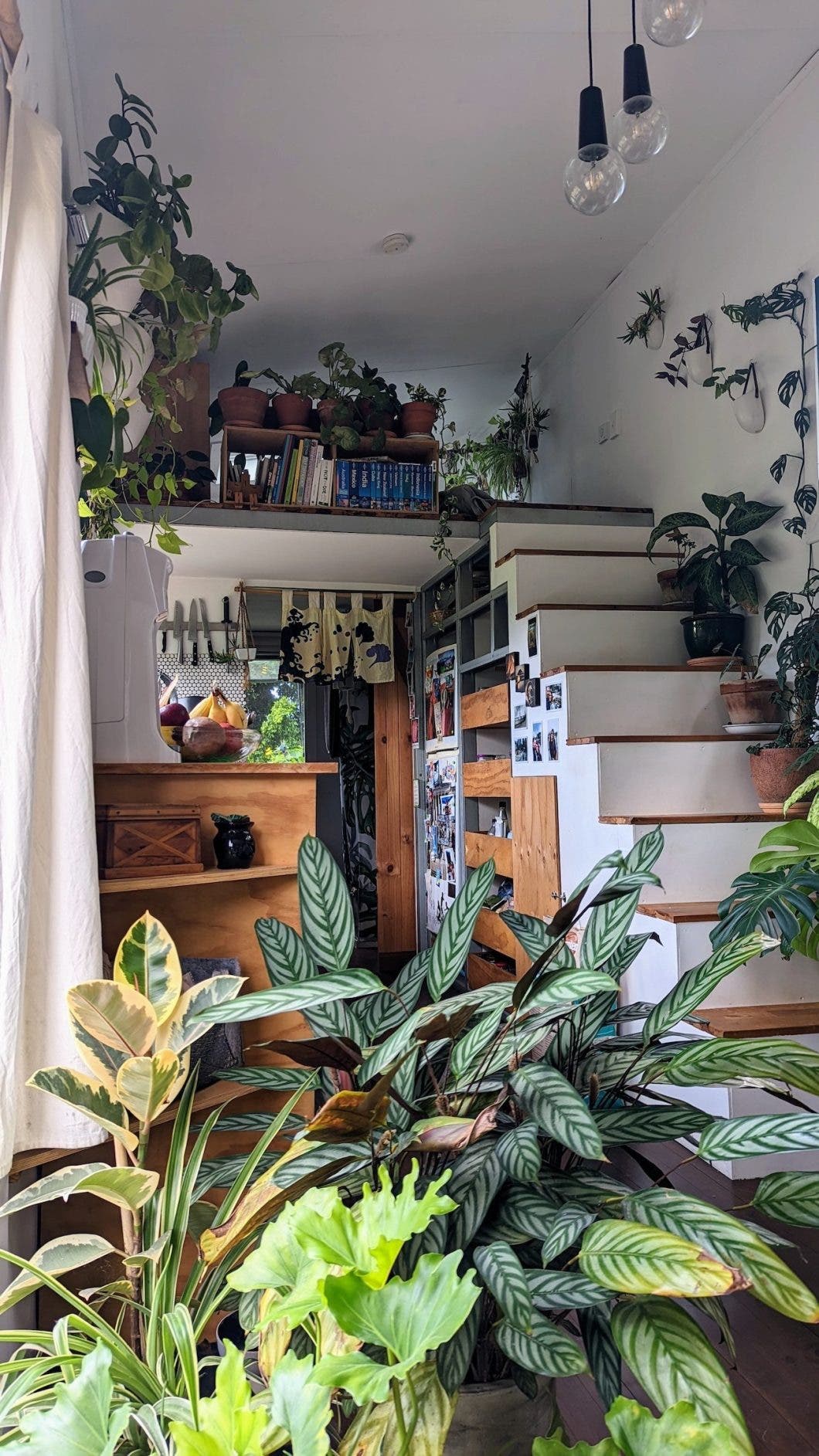 Annett and Paul run all their appliances off solar power, however, their cooking setup is unique because they use both an induction and a gas cooktop. The idea is to use the induction cooktop during the day when the sun is out and the biogas stove on overcast days or in the morning and at night when the sun is not out. The couple recently experienced a disastrous storm and weeks of overcast weather in their region which slowed down solar power generation. However, thanks to the ongoing biogas production, they were still able to cook hot meals and make tea and coffee.

Since Annett and Paul live in the subtropics, gas production is ongoing and constant for most of the year. However, biogas production slows down in the winter months as it cools down but they still generate enough gas to cook a meal on their biogas stove everyday.

Homemade fertilizer for the garden

Annett is a keen permaculture gardener and their garden provides the couple with a variety of herbs, leafy greens as well as seasonal fruit and vegetables. So she loves the fact that the Homebiogas system also provides them with organic fertilizer which she uses in the garden. 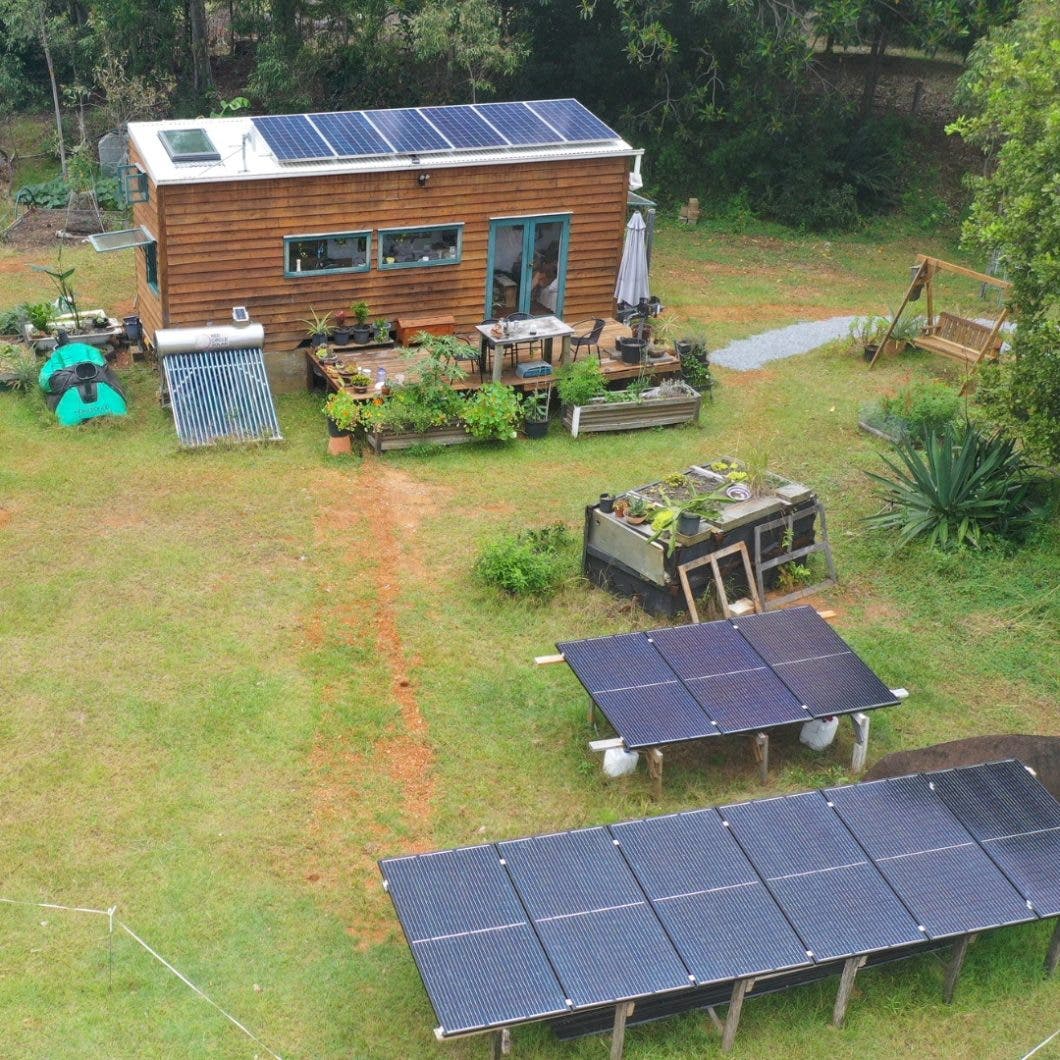 Four years on, Paul and Annett never regretted taking that leap of faith because this lifestyle has offered them so much and continues to do so. For them, the biggest benefits to living off renewables in a tiny house are that they are able to lower their impact on the planet, build up their savings and are independent of the local power grid.

Furthermore, in regards to the HomeBiogas system, they are happy to be contributing to the effort of creating a world without waste, as HomeBiogas has already mitigated 90,000 tons of CO2-eq, provided 14,017,095 hours of cooking with clean energy and 6,365 tons of food upcycled.

Annett and Paul are grateful that they were able to create this little oasis and feel very lucky that they can live this kind of lifestyle.

For more information about our tiny house life and off-grid setup visit: 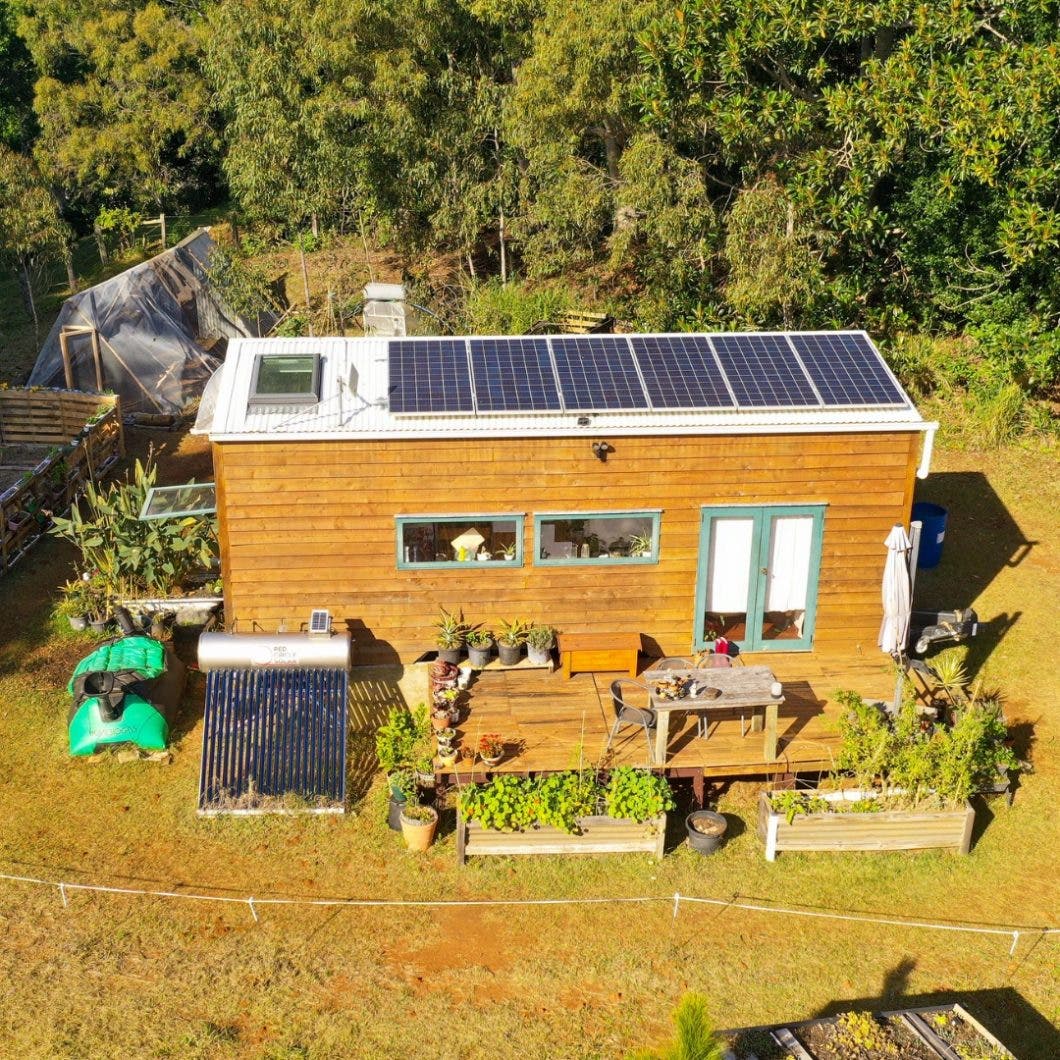 […] Living Off Renewables In A Tiny House On Wheels […]