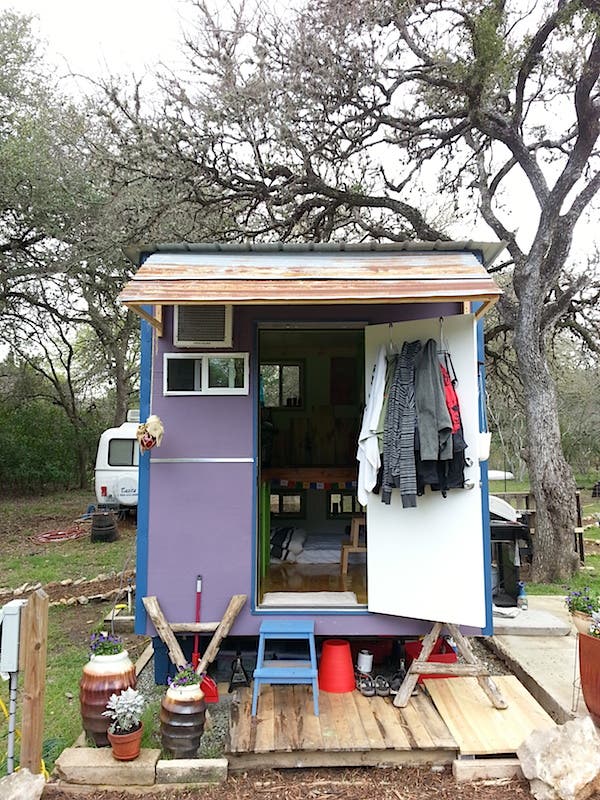 My name is Ethan Ramirez, several months ago I posted pictures of my first tiny house. A 100 square foot silver rectangle that my girlfriend and I built and lived in…at the time. Well since that time a gentleman approached me asking if I would be willing to sell him our house. I was so excited I told him yes immediately, because I had so much fun building the first one and was already thinking of how I could do it again. This time more efficiently and dare I say it, smaller.

The gentleman told me the lease on his rental house was up in February and without much thought I told him great I will have it available. Keep in mind he approached me around late October/early November giving me around 3 months and with my job of working overnights I have several full off days during the week so I figured sure my girlfriend Kelsey and I could totally build another in 3 months. Well turns out that November was a pretty rainy month so we had to scratch November out of the picture and then came December and with it the Holidays and travel so we went a head and scratched that out as well. Which had us frantic and left only with January and February. Well after putting on our “grown up” pants and “work ready” gloves (we actually don’t work with gloves) we got down to business building our tinier tiny house. This house was to have only 8ft ceilings so we could fit under trees if needed, because Texas summers can be brutal. We also wanted to have a 20% smaller footprint. Well ladies and gentlemen I am happy to say that after 6 weeks of sun up to sun down off days we did it! Our tiny house 2.0 as we call it is complete and we have moved into it. The house consists of a kitchen space with similar plumbing to the last house (water crock fed sink) an “office” which consists of a standing desk with storage beneath it, a sleeping area and living room. We decided to place the bed on the floor in this house because last summer we found out exactly how hot air rises and decided that if we put our bed down low and our a/c unit up high we will get a much cooler sleep. Inside the sleeping area we have placed shelves inside the joists of the lofted living space where we store underwear and other items used either before sleeping or just after waking. The living room consists of a couch with storage underneath for media and across from it an entertainment center neither of which were in the last house (our movie collection felt neglected). The sleeping area has a height of 3 feet inbetween joists so we can both sit up and read before bed and the living room has a height of 5 feet so it is too short to stand in but in a space that is only 5 feet wide there is not much ground to cover to get to your seat. We did not put any drawers or doors on any of the storage instead using curtains giving the space an airier feel (or maybe we were lazy who knows). We live on an organic farm with other people living in small structures and tiny homes and have a community bathroom that has a plumbed toilet and washer and dryer along with an outdoor shower. When the weather is too cold for outdoor showers we use the city rec center which only costs us $80 a year which turns out to be cheaper than a water bill. Most of our cooking is done on the grill outside and we also have a small toaster oven. I believe that about covers most of it (not that there is really much to cover in a tiny house) Oh wait the house is about 80 square feet and yes both Kelsey and I live in it full time. If there are any other questions be it about building a tiny house yourself, about our tiny house, or what ever they might be you can email us at tinyhouseask@yahoo.com

Thank you and good night. Well thought out and livable…thx for sharing

That is one of the most neatest well organized and coziest tiny houses , I’ve seen in a long time. Reminds me of a truck slide-in camper sort of. Very well done and thought out…

Wow, that’s impressive! …..that you built not one, but 2.0 tiny homes! …..that you ‘downsized’ from the original! ….that you’re living in community! GOOD for you both! Sounds WONDERFUL!

i love the way you designed the interior. i love the elevated living room. i was planning on the same set sort of setup when i get the chance to build my own tiny house. i have 2 large dogs and thought having their beds under my bed would be the perfect way to loose valuable floor space. i think i would still need more length in my house but love the ideas

If you extended a shed roof, awning, or a covered trellis over your outdoor cooking space you could better enjoy both sunny and rainy days, maybe with a couple of chairs/table.
I was also wondering if you did any insulation? Maybe that’s not a big deal down in Texas?

Thanks for the inspiration!

We did use insulation, because keeping cool is the key down in Texas we used rigid board with an air layer sandwiched between it has worked very well so far and now our house acts as a speaker box when the stereo is on it is awesome.

Pretty amazing! But well-done. 🙂 Reminds me a bit of living in a marina, where you use the community showers and loo.

IMpressive, but it feels very claustrophobic with the bed under a counter top I don’t think I could handle that :0) But many good ideas. Looking forward to see your next project.

Bed underneath is best idea I’ve seen yet for sleeping space. I would like to know about heating/cooling and bathroom pleases.

I Would also wonder if we could get a POV video to see what it like being inside.

We have a heating blanket for heat and a tiny space heater when needed and to cool we have a little window unit tucked into the wall, we also have 5 windows to help air flow. The bathroom is mentioned in the post, we have a community bath house.

I also see the power run to a post outside can you talk more about that?

Yes, I too have dogs, although not big dogs any more, but they too have to live indoors. I love the idea of living off grid, but I would like a tiny house around maybe 400 sq. I still like my bed up off the ground as I am gettin’ older and have rheumatoid arthritis, so a wood burning stove/pellet stove would be beneficial for comfort heat. Good job and it is great that you can BOTH live in 80 square feet! Your design work is amazing and it works for you both. Congrats on building two homes now. That’s good for your portfolio 🙂
Victoria, BC Canada

Ethan, have you studied the Brevard tiny house? you guys did a good job however; I think some of the tips they used could be worked up in your next house:)you do it so well, that I’m sure some one will be buying your currant house out from under you. just a thought. be well 🙂

I really love this little house……like the bed being on the lower level – smart in a hot climate.

Yes Ethan, build a covered verandah, in summer you will be in the verandah most of the time.Have fast growing vines and trees, you could make it into a little oasis.It will give you shade and privacy.

Ethan, It’s so inspiring!…I think it’s fantastic because you thought of it for while and follow the tiny house movement too. And finally built it to your needs. I really think that it’s practical! and I sense your confident that you can build anything you want it now. Best Wishes to you and your girlfriend.
Christine, Maryland

Cute as a button! You have beautiful finished surfaces which make it look so clean and modern. Great tiny home! Thanks for sharing!

love your tiny house and the bed tucked ‘down under’. think it would be very cosy and cocoon like to go to sleep in. Have to work on my agility to get up and down from the floor but I think you’ve hit on a great idea that others will be copying:)

I just love your new tiny house! I have lived in my 225sqft hut since I finished it in 2007. I’m always designing smaller places because this feels so big now that I’ve been here 7 years. I’m looking at an 84 sqft “small bus”. I totally get the crazy desire to go smaller and smaller. I think its totally cool! Well done you two!

I have a covered storage space beneath my bed where I store all my kitchen items and wardrobe. I use my bed as a couch, to study and dine.

I prefer a lot of windows and find vertical storage to be claustrophobic. Keeping everything stored away creates spaciousness.

I’m a homeless veteran living in a tent at a campground in southwestern Virginia. My pension is 1050 a month. Does anyone have a tiny hose plan that would fit on a trailer frame that I could use to build myself a home?
My cell phone is 505-492-1779 my cost for rent here is 10$ a day with electric an hot showers. Can’t find a older RV type trailer that I can purchase so just maybe this is the ticket.
Thank you
Jean Andre Vallery

As southwestern Virginia provides a fairly mild year round temperature, you may want to consider building yourself a teardrop camper, since showers and electric are available, I can only assume that bathrooms are available also. You can find fairly simple designs that can be modified to your own liking online. I’m building one this winter myself.

Thanks for your service.