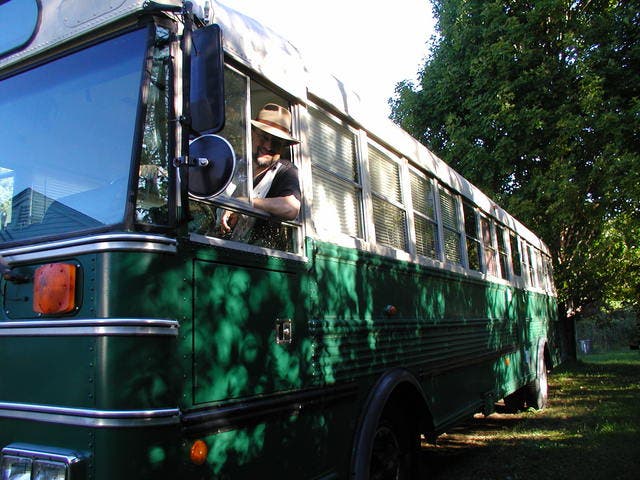 The other day when I posted the bus for sale and talked about sharing some bus conversions, I was surprised by how many responses I received. There is quite an interest in this idea and I see several posts in the future on this subject.

Jake was one of those who emailed me the other day and shared his story with me. I decided to postpone the bus conversion I was originally planning to show you and share Jakes story instead. In 1982 I was a sophomore at a small college in the Midwest. It was the beginning of second term and I was again standing in line at the on-campus book store waiting to pay for a too-heavy stack of text books. The line was not moving at all so I put my books down on the floor and started flipping through the coffee table books on display. The book I chose to pick up first was titled Rolling Homes – Handmade House on Wheels by Jane Lidz. Thus the seed was planted.

This project was first published on vonslatt.com so I thought I’d collect some of the best images from the original build log and re-publish them since this was really the first steampunkish project I did.

If you are thinking about converting an old school bus into a motor home one of the first things you should do is give it a paint job. In fact, in many states you may not be allowed to register a yellow bus until it’s painted. I went with a nice green and almond livery, the lighter color on top to help keep the bus cooler in the summer sun. Heres a shot of the salon, the table is a solid core door from Home Depot with legs made from a pair of old hat stands. The kitchen sink came from the aformentioned metal recycling bins at the dump and I bought the RV stove and dorm room style ‘fridge. This is the door to the bathroom and the kitchen cabinets. Much of the cabinetry came from Craigslist.org and from friends who were renovating their kitchens. I trimmed the edges off of these oak doors so that I could fit them flush into the cabinet face frame for a more period look. I chose the paint colors to try and tie the carpet color to the buses interior. When you are working with recycled materials paint is one of the few color choices you get to make. The darker green is from Glidden and is named “Mystic Seaport” and the lighter green is the closet match I could find for the school bus interior paint color and is called “Light Tourmaline.” The carpet came from a friends dinning room.

All and all I think the blues go quite well with the golden and woody tones of the woodwork and upholstery . There was not a lot of room for much more then a futon in the master’s cabin. The futon’s base is from an old waterbed and contains six drawers, the engine hump at the back is covered in more carpet and makes a nice nightstand.

Most of the storage for the master bedroom is in the partition between it and the bunk room, its about a foot thick and contains a closet as well as a fold down desk on the right. This is the original photo of the bus from the eBay ad – with all of the lights, PA, and STOP signs still attached. Q. Do you need a special drivers license?

A. Nope, not as long as it is registered as a recreational vehicle, no matter how big it is. Most states have some requirements as to what constitutes an RV and this usually means you have to have such things as a 110 volt electrical system, a bathroom and built-in beds or bunks.

Q. Why not just buy a used RV?

A. Because I wanted something different, something I made myself. Also, school buses are very, very tough and thus much safer then an RV in an accident.

Q. How much did it cost?

A. About $2000 for the bus, $750 to have it delivered from about 300 miles away on a flat bed, and I figure I’ve put about $3500 into the conversion – but some of that was for tools which don’t really count. I bought the bus on eBay and I was lucky. A bus like this is usually about four grand.

Q. How fast does it go ? What kind of gas mileage do you get?

Q. How did you paint it?

A. I took off all the trim and lights and the painted with True Value XO-Rust ( others have used Rustoleum ) and a 3/8″ nap roller. I used a brush for small areas. A single coat covered quite well and three years later the finish is as good as new. Total cost to paint: about $100

There’s a summary and a video of my project here: (similar to this post)
http://steampunkworkshop.com/bus1.shtml

With some build info here:
http://steampunkworkshop.com/bus2.shtml

Thanks Jake for sharing your story and for the links with all the great information for those who may want to do this type of project themselves.

Creating an Oasis Outside Your Tiny Home

The Appeal of Tiny Homes and Minimal Living for Gen Z

Jake put reading lamps by all the beds- that detail alone makes me think he is brilliant!
Ah, of course, the rest of it is nice as well. The colors are soothing, the floor plan makes sense, and there’s an oven where one can bake cookies. What more could anyone want?
Nice job, Jake!

Really nice job! I love posts like this one. I hope to do something similar within the next 5 years so thanks for the inspiration and ideas. Really nice bus!

This is beautiful, Jake, and I love that green.

I’ve seen Jake’s bus before, and always love seeing that cool green on the cabinets. Truly one of the most beautiful skoolies! Happy thanksgiving to all.

Jakes VonSlatt is one of the greatest minds of the Steampunk movement, truly an inspiration for some of my friends. I hope I can one day make it down to SteamCon to meet him face to face!

He could pretty easily put in some cabinets and a desk opposite the bunks, to give a little more working space.

I like this school bus almost as much as the caboose the other day! (I WANT a caboose!) It’s a gorgeous renovation — the colors are soothing but not boring, and I love that there are canisters in the kitchen. But the reading lights over the beds — a brilliant touch, as an earlier writer said!

This is inspirationally gorgeous! Thank you for sharing this with us!

How do you travel in these bus conversions? I am hearing that it is almost impossible to find a place to sleep at night, including campgrounds. Where can you lodge for the night or even a month for a reasonable rent?

This is insanely beautiful. I just love all the cabinetry. Fantastic job! I’d love to meet you someday.

This is wonderful! The best bus conversion I have seen.

We have an old school but we started to convert. I’m gland I ran into your article because now we’ll know how to finish it!

Jake … your bus is totally cool,very class A job you did.I,ve had a dream for years to do this very idea.I would build one as a mobile reseach lab/workshop to explore self suffcient systems for power,hho fuel systems and hybrid systems,and misc. Actually living and traveling in it as I pursued this venture.My goal is to create a vehicle (school bus ) that can get 50mpg and sustain itself (power,computers,equipment,etc.)for 30 days, providing you had water.those old buses are high , they float right over short desert bramble. jake your bus is an inspiration.

Thanks for the inspiration!

I absolutely love your bus. It is the most beautiful conversion I have ever seen. I wish I could meet you and you would let me rent it. I have a large home and need to sell. I can only dream of having something that beautiful after my beautiful home.
Thanks for sharing.

Does anyone know how I can find more details if I were to be ambitious enough to convert a school bus myself? I have been researching tiny homes relentlessly and I have started to think I am not yet ready to go ahead and build a tiny home, but I am happy to put in some labor to convert a schoolbus or an rv into offgrid. I would love any help or just sending links/helpful resources my way. Is anyone else thinking of doing this? What are your plans?