Have You Considered a Historic Neighborhood for Your Small House? - Tiny House Blog

Have You Considered a Historic Neighborhood for Your Small House? 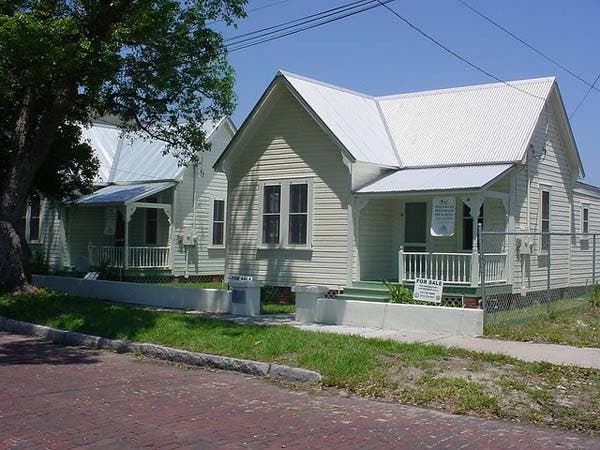 There comes a time when anyone who dreams of living in a small house has to ask the question, “Where will I put my tiny house?” When choosing to site build a little house, this becomes an ever bigger question since zoning codes and neighborhood association rules are often at odds with small house goals. As a result, many tiny house people look to rural areas where restrictions may be less stringent. However, not everyone prefers country living, and site development costs for utilities can be prohibitive on undeveloped land. For those that would rather live within more established areas, close to walkable stores and with sociable neighbors, older and historic neighborhoods may be a good choice for building a new small home. The average size of an American single-family home has grown exponentially over the years, but most of our ancestors managed to live in much less square footage, often with much larger families. Therefore, there are many established neighborhoods with precedent for small homes. Historically laid out with small lots (for example, much of the historic core of Lake Worth, FL was platted with 25′ wide lots), local zoning in designated historic districts is often tailored so that new construction within the district remains in scale with the historically smaller homes in the neighborhood. In addition, many historic neighborhoods also allow accessory structures behind the main home that can be even tinier than the main home. Some historic neighborhoods have few available empty lots, while others have many vacant lots available due to fires, demolitions, or never having been fully developed. It may take some diligence on your part to find the right spot, but with careful consideration you will likely find an affordable lot in an up-and-coming older neighborhood that suits you perfectly.

Benefits of building a small house within a historic district:

When looking for an appropriate historic neighborhood to build in consider the following:

For those interested in living more economically in a smaller footprint without having to build from scratch, looking for a house in a historic district may be a great opportunity to both live in an attractive home and neighborhood and to recycle an entire house. If the perfect house doesn’t already exist, or is not within budget, building a new small house within a historic district may be just the right combination. These are all good suggestions, but I would think that buying a lot in a centrally located historic neighborhood would be expensive. For me, a big part of the appeal of a tiny house is that I could build one without going into debt. Having to purchase a pricey lot to put it on seems to make that impossible.

That really depends on the city and the specific neighbourhood. The benefit of living in an established neighbourhood if the lots are affordable is that the servicing is already there which saves costs on water/sewer/etc. and having shops, places of emplyment and other community services can save you money in other ways (specfically transportation – depending on your situation you may be able to do without a vehicle entirely). If part of your reason for choosing a small or tiny house is that you want to be environmentally responsible, then this type of living has many ecological benefits.

That being said, the city I live in has a city wide 600 sq ft minimum for single family homes, even in my inner city neighbourhood (although there are several homes near me that are around 400 sq ft. that predate the bylaw) and this is one reason we are unlikely to build here or settle here permanently.

Yes, you can build the house without going into debt, but improving a piece of land is very expensive. This is just one alternative among many.

In considering housing for myself, I am looking for an older/smaller home in the city that has been added onto. In most cases, I can remove the additions (or even a second story) to create a small home to suite my needs/desires and the “new” creation is allowed because I am altering an existing/permitted property. Smaller square footage, lower taxes, less upkeep, more efficient, still scaled to the neighborhood, often an act of restoring a home to its original size/shape/architecture. Such a strategy becomes a workable alternative to zoning & preservation officials.

That’s a very interesting idea, I had never thought of before! You always hear of being adding on to their houses, you never hear of people tearing down additions. I like it!

Here in Texas, I can’t remember which city it was, but people were buying property in the very old neighborhoods, and building McMansions on it. If there was a house there, they would tear it down. That cause a pretty big uproar in those areas. The people that lived there didn’t like that plan at all.

Here in Tampa there are several streets of old “cracker houses” that average 10×25 (usually with another 5-8′ of front porch). The construction and layout are very simple – you walk from the porch to the combination kitchen/living room, then to the bedroom, then the bathroom straight back. Usually they’re made of cement block with plaster and lath interior walls. They’re little, efficient, and amazingly hurricane resistant.

Sadly, the trend is to buy three of them and knock them down to replace with boxy, poorly constructed Spanish imitation style McMansions (with hurricane ratings artificially inflated by poor fenestration – but don’t get me started on that).

I’ve often considered buying one and fixing it up nice, but even the ones in bad neighborhoods (the only place they haven’t all been leveled) are prohibitively expensive.

Many of the older houses in many rural communities are small enough to be considered “small houses” here.

Also, in several areas of Montana, I’m sure you can do whatever you want building wise- heck you could buy your own town! Never been out there, I hear its AMAZING. Ever since Steinbeck went on and on about Montana in “Travels With Charley” I’ve wanted to visit…
Good post Jo-Anne!

Thank you everyone for your feedback on this post. It’s interesting to hear the perspectives from different areas of the country. There is definitely a wide range of prices and regulations from neighborhood to neighborhood, even within individual towns.

I particularly like the concept of taking an existing home and making it smaller by removing additions. The 3rd image in this post (yellow with two doors) is the birthplace of Abner Doubleday in Ballston Spa, NY. By my guesstimates, it was about 250 sf originally with an attic loft. There is a rear addition that brings it up to about 500 sf now. Removing the addition would get you down not just to small status, but into the tiny realm. And you could make the case that you were restoring it to the time period when Doubleday lived there.

I thought that yellow house was a little duplex.

I LOVE the houses in the first photo

New Castle, Delaware is an historic town (developed between 1651 and mid 1900’s) with a few vacant lots. Prices are higher than say Anaconda, but you’re near Washington, Philadelphia and Wilmington, the town itself has restaurants, charm, walkability and an amazing range of housing: Georgian colonial from 1750-1800 to kit homes from the 1920’s. Lot width vary from 20-30′, and I believe the minimum size of new homes in the historic district is zoned 1700sf. So perhaps small, not tiny, not big.

I don’t know that I would even consider 1700 sq ft small. Sounds kind of medium sized to me…

Around Olympia, the central historic neighborhoods have the larger houses (and higher real property prices). It is the neighborhoods on the hillsides overlooking downtown that are more affordable. However, buying a lot (80k-150k) and then developing costs much. Just permits and fees can be 35k.

It is far cheaper to build an accessory dwelling on a property which already has a house. Fortunately, Olympia is fairly amenable to this. Development fees are much lower for these ‘mother in law’ houses.

Also, lots of people around here convert garages to apartments. And if the county assessor wanders by later, you should just fess up and say so. It amounts to a little more property tax, and they always seem to find out sooner or later.

It is far cheaper yet to build something under the 200 sq ft “no permit required” threshold. Still you have to mind setbacks (distance to property line, street, alley.) And this would seem to work best on an already developed lot. You might have to call it an art studio… officially, But it works!

I am always hoping for better ways of building and living without beaucoup DEBT.

The colonial and early American areas of Philadelphia are full of little homes, many well under 1,000 square feet. Owning an older historic home is sort of like recycling, which is never a bad thing and it’s really important to preserve our architectural history. Little homes make that possible for people, so inclined, who might not have the budget for something larger or detatched.

[…] high home prices by prohibiting low square footage construction. Some builders discover that historic neighborhoods are more likely to welcome smaller homes. Other homeowners, including Debra, have built their homes […]

[…] high home prices by prohibiting low square footage construction. Some builders discover that historic neighborhoods are more likely to welcome smaller homes. Other homeowners, including Debra, have built their homes […]

thinking about purchasing one of these.