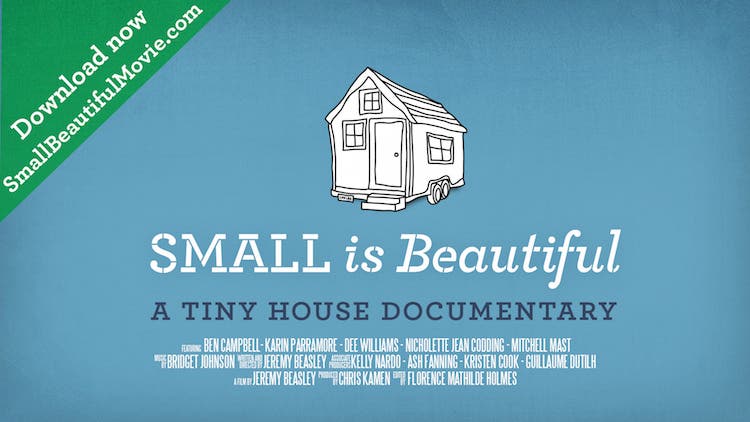 It’s been two years in the making, but Small is Beautiful: A Tiny House Documentary is finally here! I had the opportunity to view this a couple of weeks ago and also many of you saw a premier of it at the Portland Tiny House Conference. This is a great documentary and I highly recommend it!

Small is Beautiful – A Tiny House Documentary [TRAILER] from Jeremy Beasley on Vimeo.

This isn’t the first documentary on Tiny Houses, but it’s definitely unique. Here’s what Jeremy Beasley, the director, had to say:

“I wasn’t aiming to glorify tiny house living. I explored what it is really like to build and live in a tiny house, sharing the subjects struggle and triumphs – and their real life journey through it.  I wanted the film to go deeper than trends or aesthetic. I wanted it to be courageous and vulnerable. To explore the real human aspect living tiny.”

What inspired you to make the movie?

“The idea of having a 30 year mortgage is not something I’m comfortable with, so I started researching alternative ways to live. How could I live with less material possessions, in a smaller space and I thought what better way to learn about it than to interview the people in the process or already doing it. I started making a few short films of people living in shipping container houses and on boat houses and eventually ended up in Portland, Oregon where the Tiny House community is incredibly strong and offered a really deep, beautiful and inspiring look into tiny houses.” “I thought I’d make the film as a way to research tiny houses for myself so I could build one. I thought I’d be done in 3 months, and just pop up a video on my website. Now nearly two years later, I’ve spent all of my savings, had dozens and dozens of people help make the film and it’s become so much more than I could have every hoped for!

It definitely wasn’t easy to make the film, for 8 weeks, some very kind friends of mine let me stay in there backyard while we finished editing the film. In the backyard, I lived in a swag (a swag, for those who don’t know is a canvas tent/sleeping bag type thing). It’s not a tiny house, but it’s definitely Tiny Living!” How can people watch the film?

Small is Beautiful: A Tiny House documentary is available worldwide for download (which you get to keep forever) for $9.99 via SmallBeautifulMovie.com

There is loads of bonus content in different packages there with hours of great info and footage that we couldn’t fit in the film as well. If you love tiny houses, the deluxe edition of the film is the best option.

Small is Beautiful is also available on iTunes, Vimeo on Demand, Amazon Instant and Google Play.

Watch it on iTunes here: http://bit.ly/SmallBeautifulMovieiTunes We’re a family of 6 (4 children) living in 540 sq ft, what we thought was a tiny house. Guess we were mistaken!

You live in a small house, these are just the numbers he chose to use in his documentary.

Please re-view that part of the trailer. The 320 square feet refers to the minimum square footage of (factory produced) manufactured housing. The actual definition of tiny house living is pretty fluid, and depends more on a person’s or family’s individual needs. But I suspect you know that already. 🙂

Lofts, with their less than 5′ of head room don’t count, which permits them to be exempt from ingress/egress (still a good idea to put a huge window and chain ladder to the outside in a loft, considering that most are built over the kitchen) and stair regs.

So, if you had a Tiny House on a Trailer that required no special permitting, you’d easily stay under the 320 sq ft min manufactured home standard and the 400 sq ft min HUD standard..

But, if you had a Tiny House on a Trailer built to ParkModel standards, you have to exercise a bit of self control to stay under 400 sq ft, where by you open yourself up to HUD regs (explaining to folks you don’t sleep in that loft, etc…).

So 320/400 are the numbers to fall under before you start to begin to be considered something other than a Tiny House.

Of course the lofts that are installed in RVsized Tiny Homes or ParkModelsized Tiny Homes give additional useable space. A TinyHome on a 8’6″ X 32′ trailer with big opposing lofts that sit cantilevered a couple of feet, might actually provide it’s owners with something that feels like 450+ sq feet (even though only the 272′ of the primary floor would be counted).