Tiny House in a Landscape 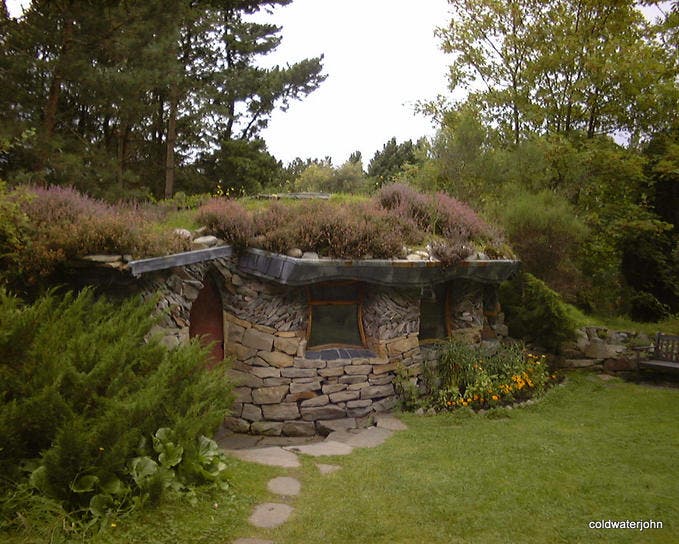 This weeks Tiny House in a Landscape was suggested by Christina Nellemann who writes for the Tiny House Blog on Mondays. It is the Meditation room at The Findhorn Foundation and a photograph by John Coldwater. This is set in a beautiful landscape and could also be considered a landscape itself. Love Halloween? Get married in a tiny chapel in Hell.

Just Park It: Tiny House Village in the Land of Enchantment

It almost looks like it is unfolding from the ground.

I absolutely love this!

This is cool. I wonder what it looks like on the inside, and how big it is.

whenver I see these cob houses I think of the smurfs.

may I suggest it be called “Tiny House Is The Landscape”

I was turned on to Findhorn back by a high school teacher back in 1975. I wonder if the folks at Findhorn are still talking to the plant fairies…..

this is pretty much my dream house – something that just perfectly meshes with its environment – and looks like the home of fairies (or hobbits, or, ya know, you get the gist).

this could also be my art studio. i could go to work in this every day and never tire of it.

Wish there were pics of the interior of this little gem! I went to the Findhorn site and could find nothing in the way of details on this house, let alone any info on other dwellings or floor plans there… Know it’s probably just *me* not ‘finding’ info that’s there, somewhere…
Small homes built as earth-bermed, subterranean or even just in an organic fashion (cob, earthen, etc.) appeal to me…

Great find. I find this little structure quite appealing. I wish more actual homes were like this… able to be passed by without even seeing it if you weren’t looking. Too many mainstream homes seem to have more of a purpose to impress others than shelter the occupants. Don’t get me wrong, I love the beauty of architecture and don’t think it should be hidden. But working with the landscape instead of against it is truly an artistic touch. I’m a person who likes to come home from a hectic day and “cocoon” into my home. This would be perfect… a partnership with nature. Thanks for the post.

Looks great – wish I could have one!

There are two houses in one ‘yard’ near me (about a mile as the crow flies) sunk into a valley/gully with a garage also sunk into the hillside. I can only see the front of one, and it is mostly a standard design (put the facade on any tract house and it would fit right in) but only one wall is fully open. The other you see the grass on the roof with a skylight poked up through it. In my search for housing, I have also seen the Monolithic Dome folks, and one of their customers has his now under ground. very well hidden in fact. I’d love that, but what I really need may be a small house (underground or not), but a large workshop. Sometimes I think I need a Quonset (40×40) hut with a small camper trailer for sleeping quarters.

Back to this place. As mt previous quip mentions. it really is the landscape. Doing something similar here if one had a hillside like the two houses near me would be fairly easy. one would likely hit a lot of rack to get a base for any size house, and that could be used for building.
It is one of the things I’ve kind of kept an eye out for, but the ideal places have either been too pricey, or likely to flood, or finally not viable due to zoning (not allowing one to live in a camper during the build or not allowing that style of house). Needless to say, I tend to look out in the countryside (never been a city boy anyhow), but still have the work area issue to deal with.

I am expecting to see Froto standing in the front door! LOVE this!!