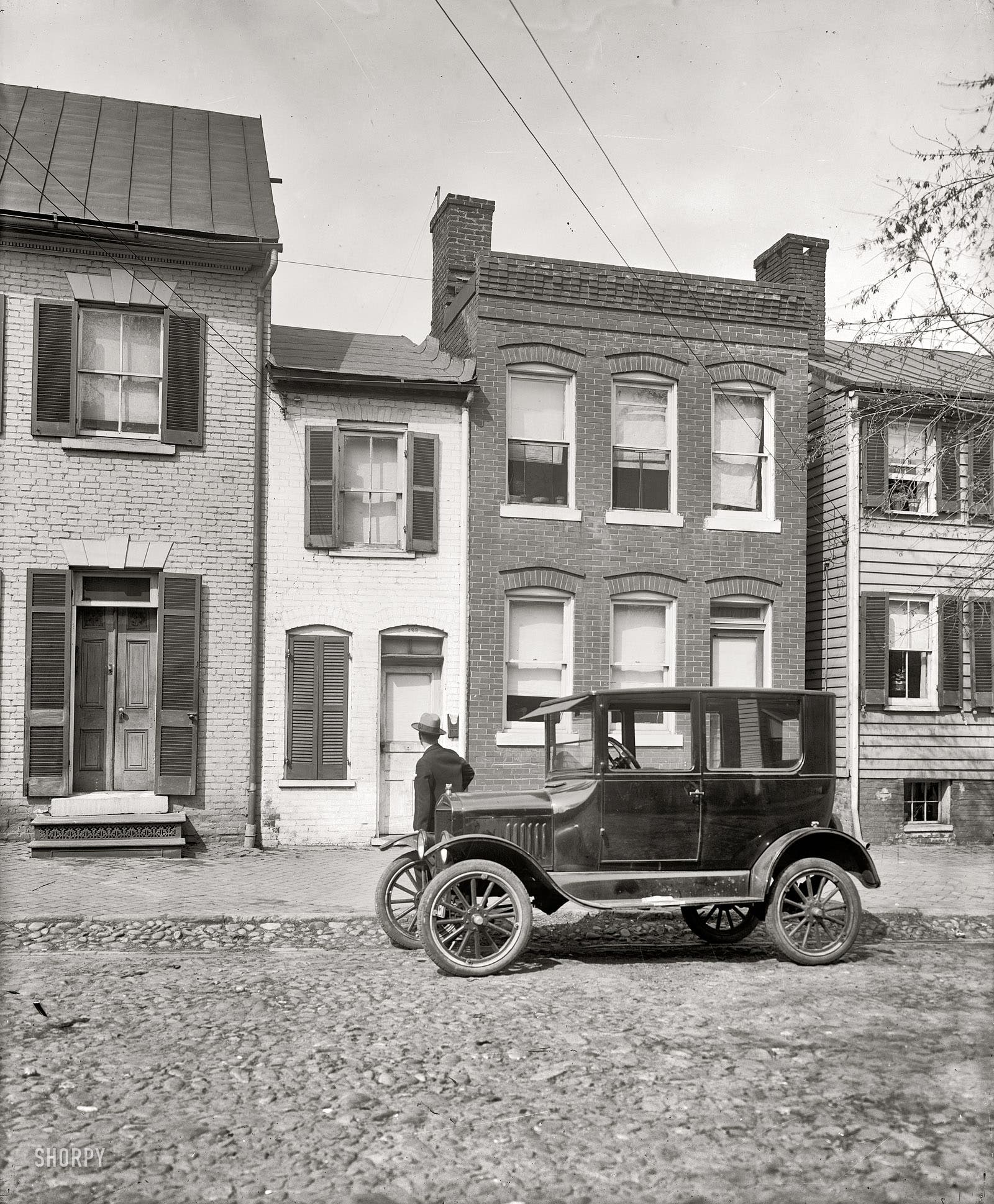 A Tiny, Beloved Home That Was Built for Spite

Fred emailed me this story from the New York Times written by Steve Baily. Below are short quotes from the article, to read the full article go to the New Your Times website.

Photo above: Circa 1924. “Ford Coupe at ‘little house’ in Alexandria, Virginia.” National Photo.

The Spite House (in blue), built in 1830, is 7 feet wide, about 25 feet deep and a whopping 325 square feet in two stories. It is located on Queen Street in the Old Town district in Alexandria, Va., just across the Potomac from Washington. Jack and Colleen Sammis, shown with his son, Jake, own the house now.

Although the couple who previously owned the Alexandria house for 25 years used it for most of that time as a full-time residence, Mr. Sammis has used it mainly as a pied-à-terre since buying it for $135,000 in 1990.

Structurally, it’s more of an enclosed alley than a house — the brick walls of older houses on either side form the painted brick walls in the living room. It’s called the Spite House by some because John Hollensbury, the owner of one of the adjacent houses, built it in 1830 to keep horse-drawn wagons and loiterers out of his alley.

The house has drawn attention out of proportion to its size.

Beneath the stairs is a cupboard with a small microwave oven on top. On the other wall is the kitchen counter with a small sink, a small four-burner gas range and an under-counter Sub-Zero refrigerator and freezer.

Upstairs, a bathroom with a claw-footed tub/shower is at the rear. Storage space lines a narrow hall beside the stairs.

A full-size double bed is pushed sideways against a wall; it is made up as if the side against the wall is the head.

Mr. and Ms. Sammis also entertain at the house. “Unless we put some of the people upstairs,” Ms. Sammis said, the house can hold only “about 12” guests.

Again you can read the full article by going to the New Your Times website. This was great information. it will definately help with future purchasing decisions.

His work and the t century can be left at the door of the Spite House. Mr. Sammis said that the house was in pretty good shape when he bought it, but that he wanted to take it back to a more original look. So a friend, Matt Hannan, who had redone the patio space for him, took on the interior as well, adding period details and highlighting original elements like the brick walls and the wood floors. Mr. Hannan put the heating and cooling system in the tiny attic space and moved the water heater out of the kitchen and into an upstairs closet. Another upstairs closet conceals a stacked washer-dryer unit.

There’s a house like this near where I live in Sydney.
Search for “Plate 34” on this page:
http://www.cityofsydney.nsw.gov.au/newtownproject/Essays/MR/Marie_Ryan-Chap-2.html

I love this house! It’s a shame that it is not being used as a full-time residence though.

Cutest thing EVER!!! OMG, if I could tolerate city living, I’d want to live there. I ADORE the little back ‘yard’. The owners have it decorated so nicely!

I saw this house on Home & Garden TV recently and the husband now lives in the house full time and the son lives there part time.

I think they utilized the space very well and it seemed larger than its actual square feet.

I just watched the episode I mentioned on HGTV as it was still on my DVR and it was a repeat from 2005 so the New York Times article information on the family is more current.

i was co-owner of “Spite House” with my ex-husband Jack for 12 years until our divorce in 2002. We had several different tenants. I have never spent one single night in the house nor has my son Jake, who is now 18. He lives
with me. His father does not live there part-time or full-time, never has. It is empty. It is just a “show and tell” house. He
just shows up for photo shoots and bragging rights.

That one in NYC looks really neat, I would like to find more pictures, especially of the inside…Kent

So glad I was referred to your blog. I recently visited Alexandria and included the Spite House in an article on my travel blog. Many people were very interested in the house and wondered if it was possible to see the inside of it. With your blog post, now they can!

I really like this house. It seems so cozy. And you never think of a city house as cozy. I though what the family did with it was wonderful.

Classic! And it still looks great even after all these years. Timeless indeed.

It’s tiny but it feels warm. They took great use of the space.