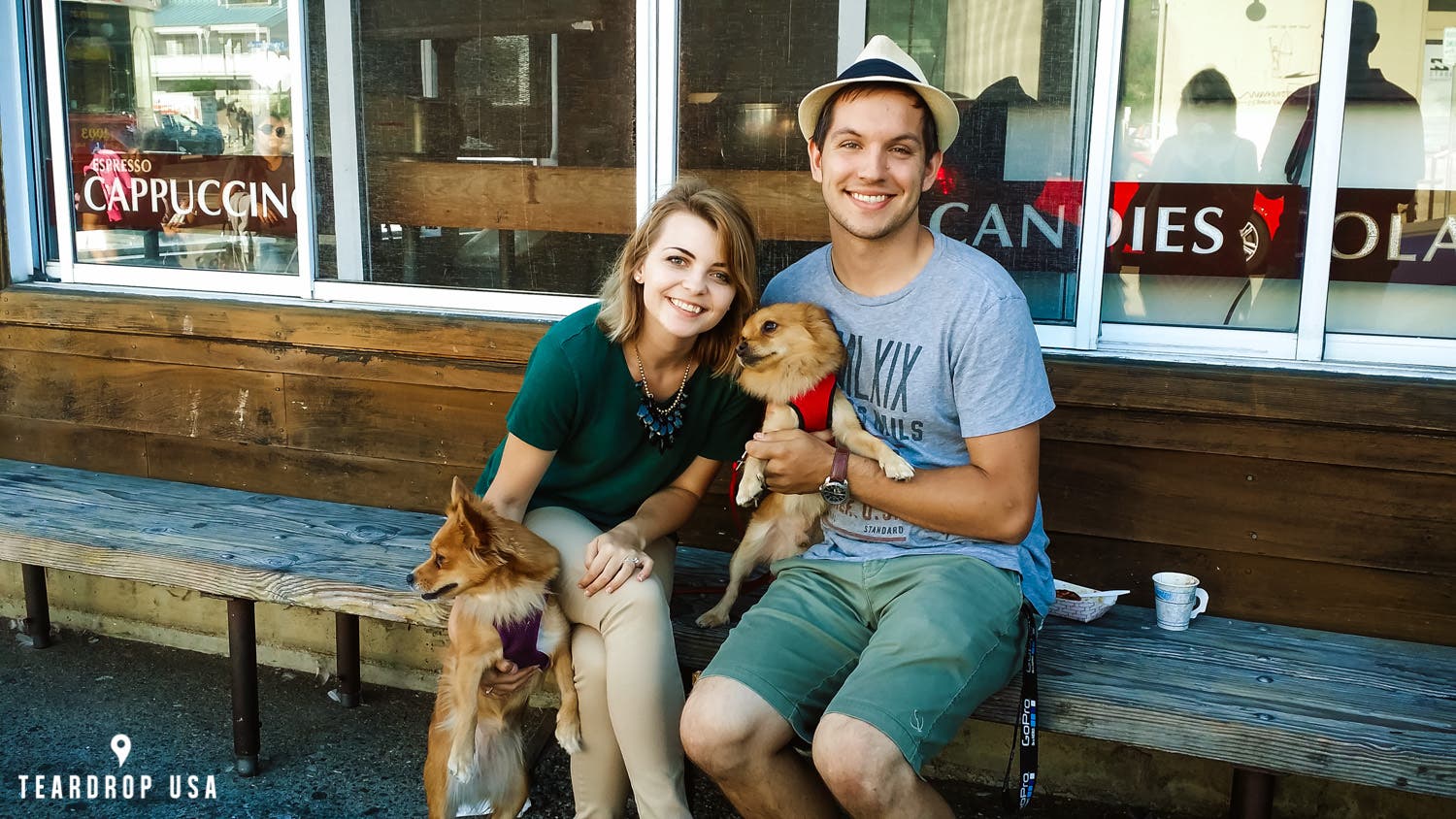 Issue 25 of the Tiny House Magazine has an article about Austin and Nicole Barkis, a Southern California couple who sold nearly all their belongings, purchased a teardrop trailer from Craigslist and hit the road with Bowser and Yoshi—their rescued Pomeranian Chihuahuas. All four of them are now enjoying life in 4×9 trailer towed by a Mini Cooper S. While you can find out more about the couple and their teardrop trailer life from the magazine article or from their website and Tumblr blog, this post covers their minimizing and simplification process and how they live their life out of 36 square feet—with a few thousand miles as their backyard.

Austin and Nicole decided to simplify after questioning their lives in Southern California. High rent and bills were draining and unused stuff was piling up. After viewing a TEDx video by Adam Baker of Man Vs. Debt, the couple put their personal belongings on Craigslist and looked for a trailer that could be towed by their Mini. Austin runs his own business and Nicole telecommutes for her software job, so both knew they could make money on the road. When minimizing their belongings to maximize their lives, the couple realized that the process of getting rid of things had to have a forced deadline. Storage units and cabinets were still full until the very last second before hitting the highway. That’s when the virtual fire was lit and stuff began to get tossed. “When we first began, we had a ton of stuff sitting in the teardrop trailer (which is just the bed inside) and we had bags and little boxes of stuff overflowing everywhere,” Nicole wrote on their blog. “It got to the point that when we were loading the last few things, we just started throwing stuff away in the nearby Dumpster of our old apartment complex. It’s fascinating, you plan and you plan, but once it’s finally there and you have your trailer and you see the reality of the space vs. what you thought you could keep, you stop caring. All you want at that moment is to get on the road.”

It only took until the second night to realize what they really wanted to keep on their journeys. Along the way nonessential items like throw pillows, extra shoes and even a potted plant were given away.  They kept a few items for comfort and fun, tools for the teardrop and Mini (located in a storage box on the front of the trailer), computers, food and cooking items, and some bins of clothes that will be minimized even further. The Mini trunk and a storage area under the teardrop bed hold items not immediately needed. Austin and Nicole’s mission is to live minimally yet to the absolute fullest degree possible. If you are struggling to minimize your life, just imagine having to pack it all away into a teardrop trailer and a Mini Cooper. Why I’m highly skeptical (yet intrigued) by rooftop tents

On a light note, isn’t there an unwritten rule of a “no bean diet” while sharing a small space. Maybe it’s just us living in the colder climate who have nowhere else to go!

Seriously I was looking into building a Teardrop but have opted for a tiny cabin I can enjoy anytime. Camping fees in Ontario have jumped to the point where after paying for gas (pre price drop) there was little left over.

As for personal possessions, I tend to have my Shirt and Pants of the week while around home (clean T-shirt every day is a must) so I could pair down my clothing considerably.

Keep up the good work guys!

Hey, the beans comment was only for a laugh. I will not tell people what they should or should not eat.

Hey you two, now that you’ve done something about your living quarters its time to clean up your diet. Get rid of all that canned dead food and start eating healthy and fresh food.

Not sure on this, but I think they do canned because they don’t have an electrical refrigerator. To each their own – I’m impressed that they’re able to do it!

Yes, get rid of the tinned junk.

Kinda not cool giving them stress about their food, some canned stuff on the plate with fresh is affordable and convenient. Some nutrients prefer to be fresh, others survive canning with no problem. They both have smiles on their faces and they’re doing something excellent with their lives. We should all have smiles like those two.

What a gorgeous little teardrop. Love the look of red with light natural wood. The umbrella holder is a nice addition.

Hats off to these kids. What a great way to live. I too think they should get rid of the canned beans but I would replace them with Twinkies!

You two are astounding! This will be a chapter in your life you’ll treasure forever. Having the guts to minimize to the extreme is a level or bravery that boggles my mind:)

Super cool Adventure! Check out Fish People Seafood. The boil in the bag meals are perfect for what you are doing. Add some rice or Quinoa with fresh veggies and you have a well rounded meal!

My wife keeps bugging me to build us a mini. if she sees this article I’ll have to get on it!

Fresh food is good. provided you have good refrigeration. Some backup is useful. Especially when on the road. In many areas where one might travel there may not be all the fresh goodies we would like. Be flexible!!
Keep on the path you have taken. I think it is grand.

This tiny house example is awesome. Total adventure waiting to happen. Looks like a very happy couple living out a dream. Good on you both. I could see my wife and I doing that. (Without the dogs though.) I love animals, but that is some tight quarters to share with a couple dogs; even if they are tiny themselves. Thanks for a great post. 🙂

Very nice teardrop. I love the umbrella holder, very useful if it’s windy.
A good book to have with you on the road is Scheller and Maynard’s classic book “Manifold Destiny”. People have been cooking on car engines as they drive to their destination almost as long as there have been cars. The book has recipes and helpful information on finding the best way to use your particular engine since all designs are different. It’s cool to spend your time enjoying the drive to the next place and arriving with a piping hot meal ready to eat! And no, your food does not taste like the engine unless it’s leaking fluids and exhaust all over the place. It helps if you have an infrared thermometer handy but they just used a regular one.

Best of luck in life’s travels!

Sounds great! I would love to do this and would have no trouble minimizing my possessions. The problem is not having a job I can do from anywhere. What freedom that would be!

BRAVO! We’ve established a floating group of TH’rs in the Minneapolis/St. Paul are in MN. Should your path bring you this way, please give us a heads up and plan on a South Shore excursion along Superior from MN thru WI. Spring, Summer, and Fall bring some amazing scenery. And your tales of downsizing and hitting the highways will certainly be welcome to those of us still in the planning/building stage. Thanks for a great article and terrific pics!. gus

One thought – (having done so myself post building fire, chemical injury and losing way of life as I knew it due to years of nearly dead).

I “tithed” all those unwanted possessions – even if you put it in boxes and left “curbside” or taken to local charity – then much use out of it. (Unless what you tossed was garbage).

Most people (at least when I lived in NYC) will not look in dumpsters unless like me then as an artist what I needed from nearby building constructions sights was there to be found! But many will if items are placed in a box with a “pithy” sign such as “free x, take me” will be taken rapidly.

Good blessings for both of you – please keep the site aware of how you progress in your adventure.