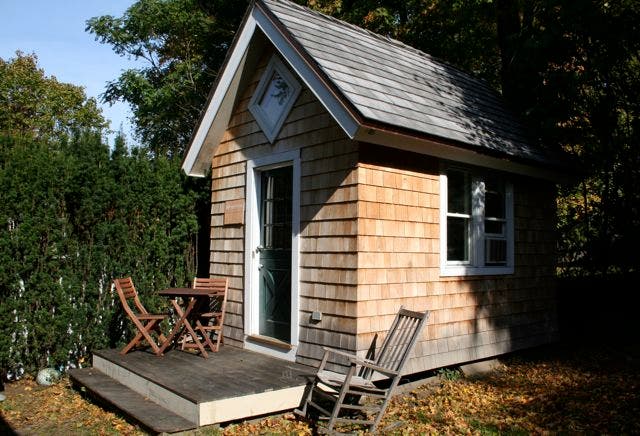 I found myself in fall of 2009 looking for a work space for my newish architecture firm, SLR Architecture. We had a baby that needed my then current office space as her bedroom so I was on the street. I was faced with the dilemma of shelling out $1,500 to $2,000 per month and commuting someplace else or somehow building my own work space.

I was always intrigued by small structures, especially well designed ones. So being an Architect, I started to draw. I thought long and hard about much space I actually needed, how I would build it, what materials I would use, where would I site it etc. And of course, what the best economic solution was for my business and family. I liked being close to my family, hated commuting, and I liked to design and build things so the decision was made! I ended up designing a structure that was only 9’x13’ or 117 s.f. reminiscent of Henry David Thoreau’s cabin in Concord, the size was significant because anything over 120 s.f. in my town required a permit, below that nothing. More importantly both the side and rear setbacks to the property line on a structure less than 120 s.f. were 5 feet, anything over that was significantly more. This was a big issue on a postage stamp size lot like mine! I began looking for salvaged material for my studio and collecting things like doors, windows, lumber, and flooring. In late September I started digging the footing holes for the structure and then something totally crazy happened! Out of the blue I got an e-mail from a friend that the TV show Renovation Nation was looking to shoot an episode in Boston while they were in town. I thought I would pitch a new home I was building for a client so I wrote about that but also by chance I thought my studio might make an interesting TV story so I included that as well. They asked for more info and luckily my wife was formerly in video production so we hammed it up and sent in a demo reel explaining the project and putting our best smiles on. The producers were very excited and bought into it, the race was on! Now I had to build this thing on their shoot schedule which was only about 2 weeks. You can see the full episode here.

I am really proud of the way SLR Architecture’s studio turned out. I get to be close to my family, save money and the environment. Being on TV wasn’t too bad either. And when my business expands, I have a guest house/play house/home office ready to go! Nice job Stephen. Attractive and functional building, green, salvaged materials, energy efficient, and innovative materials like the imitation cedar shingles made with old tires. Clever solution. Thanks for sharing. Anyone interested in building small and building green will find this useful.

I like the way that you designed the inside. Wood finish on the floor and wall of work areas look great. And plenty of room. I’d love to have something similar for myself!

Glad you like it, all of the interior wood is recycled, the floor is long leaf pine salvaged from an old home and the walls are something called pecky cypress also recycled from a carpenter’s shed!

I really like those shingles, and it looks like they’re safe for harvesting rainwater as well as being fireproof. Good choice! Very nice office space.

Great looking interior too! Can we see the TV episode anywhere online? Congrats!

Hi Deek – Here’s the link to the episode
http://slrarchitecture.com/studio.html. I’m a fan I saw your piece
on TV that featured you and your brother from a couple of weeks
ago, nice work!

Hi Deek – Here’s the link to the episode http://slrarchitecture.com/studio.html.

I’m a fan I saw your piece on TV that featured you and your brother from a couple of weeks ago, nice work!

Thanks Steve- goin’ to check it out right now…and come summer when we do our MA- tiny-shelter-workshop, perhaps we can get you to come out and speak about your studio, etc- if game…it’ll all be filmed for a Tiny Yellow House episode too.

Deek – I’d be game for speaking at one of your workshops, let me know!

Love it! So cute and does the job. I’m thinking great little playhouse…come on down and make one for Charlotte 😉

I learned some good things from the video. Thanks!

I’m guessing the loft is now just being used for storage, then maybe later for sleeping when the studio gets converted to a tiny home and Steve moves to his big-time studio downtown.

Wow, I learned so much from this episode! I’ve always wanted to build Lamar’s tiny solar homestead house, but there were a few things about his design that I’d want to tweak to make it more sturdy and long lasting…Take-aways that I loved from this video:
–Sub floor spray foam
–recycled tire roofing shingles
–steel pin foundation
Thanks again for sharing, I will hold on to this link for quite a while till I’m ready to build!

[…] many Bibles?Watson vs. Jennings — from John LaGrou.My study is in the basement, but this place is cool. (HT: JF)Excellent interview with Eric Metaxas at Harper’s: “When I first heard the […]