The Tiny Houses of Christiania 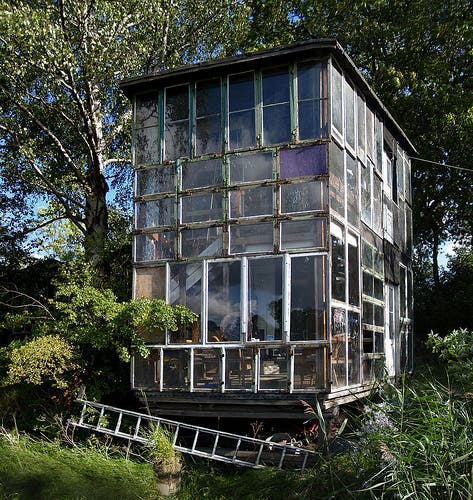 A town within a city, a rebel neighborhood within a well-ordered society. This is Christiania (Freetown), Denmark, a small community smack dab in the middle of Copenhagen, Denmark. Within this community are tiny houses, built by hand and with whatever materials are within reach. Christiania began in 1971 as an occupation of disused army barracks in the southern portion of Copenhagen near a lake. The 900 or so freethinking individuals who inhabit the area are a self governing community who refuse to pay taxes to the Danish government, run their own businesses and schools, live without cars on unpaved roads, build their own houses, restaurants and civil buildings and even have their own currency.

Until 2004, one of the main attractions in Christiania was a series of hash stands on the main thoroughfare, which was named Pusher Street. While hard drugs have always been banned by community law, the hash trade was a burgeoning business for Christiania until the Danish government finally cracked down and the town was forced to refocus its business ventures. Visitors now come to Christiania for inexpensive, ethnic food, music concerts, coffee shops, yoga studios, farmers’ markets and handmade gift stalls. However, there is still a drug element in parts of the town. The tiny houses of Christiania are wild, freeform, colorful and charming. A vernacular architecture that blends in with surrounding trees and flowers. Walking around the park-like neighborhoods, you would never guess you are right in the middle of the city. Birds are singing, there are fish in the large lake in the middle of Christiania and community members ride around on bikes. My husband and I visited the Christiania “hardware store”, a three story barn which features hundreds of racks and shelves full of recycled wood, windows, appliances, handmade furniture and other building materials. We saw a man with a bike and bike trailer carrying his three small children ride into the store. He and the children loaded up the trailer with some trim wood and they all gaily pedaled away, back to their house-in-progress.

Some of the Christiania houses are even re-created from old shepherds huts, bathhouses and gypsy wagons.

However, photos of the houses, people, children and Pusher Street are discouraged. This is a hippie throwback community, but it is still home to hundreds of people who choose to raise their children in Christiania rather than out in Copenhagen proper. Most pro-Christiania citizens believe that the Danish government wants the community disbanded, probably because they are located on one of the most expensive and beautiful areas of the city.

Photos don’t do it justice, you just have to visit Christiania and see it for yourself. When you do, don’t forget to pick up a “Bevar Christiania”, or “Save Christiania” sticker. What a crazy quilt of inventive and compelling architecture. Most of it lovely to look at too. But more wonderful is the development of community. We all need to recognize this messy but inherently natural process. Would love to visit ( if I were still traveling by airplane ;-))

I’ve been to Christiana and it is a wonderland.

Julie, you could still travel by airplane and buy the offset to cover the damage.

Wow, that is…inspirational! What a fantastic collection of freeform architecture! There are so many great designs there I am not sure which my favorite is. I would love to have the chance to travel there someday.

The land of LEGOs, ubiquitous bicyclists, my wonderful great grandparents, and the happiest people in the world has once again inspired me!

Me too Tim. I keep thinking come join us that feel the same, an invitation to those that live in a different mindset. I have to show this to my brother who went to Copenhagen a few years ago on business. I love this community who hopefully will inspire others.

We need a Christiania in The States. I’m thinking there are similar places in New Mexico.

Been there. You have to be more honest about the settlement to view it fairly. I don’t want to pay taxes either, but while my kids lived there they had free medical care, etc. Nothing comes from nothing. Some people carrying the burden of others. As for raising children outside the “system” DDDUUUMMMMBBBB in Copenhagen. As a teacher in California I only WISH I could offer kids here such a fantastic school system-all free. Because some people are willing to pay taxes for the common good. It is beautiful and the architecture is awesome, but think of world problems that could be solved with all that creative energy if it were focused for the coomon welfare of all!

Why are you calling it DUMB? You talk of the creative energy, that’s what these people have done is use it in positive way. You talk of the common welfare of all, it has to start small. A small community like this can’t save the world, but like a pebble in the water a ripple effect can be created. Don’t knock what they’ve done, they are an example of how things can work for the better.

Back in the 60s – 70s there was an isolated community on the outskirts of Oakland (CA) that had this sort of feeling of independence and free-form construction, including tree houses as I recall. I can’t remember the name of it and don’t know what became of it. Maybe a reader could fill in the blanks?

This is pretty cool. I like this idea and the town sounds like a nice place to get away from it all. Good for them all!

I bet the land was cheap and unwanted originally, like haight-ashbury. Lovely what they have done with it, and I hope they are allowed to live up to their ideals.

I live in copenhagen and I love Christiania – what beautiful pictures you have taken: ) Nice to see people spead the love!!

hello, i’m a danish kid on 15, and its true what Susan McReynolds says. we are one of the luckiest countrys – free school, free hospital – so that no one NO ONE has to worry about their health ! isnt that lovely ! even those without a roof can go to the hospital !
i always calmly scold grownups when they whine about having to pay the government. – or not scold, but remind them of how wonderful it actually is !

its about carring the country together. together we can do anything !

It is wonderful…but while some may choose to work hard and devote their lives to a profession that helps others, others may choose to do nothing and benefit from others hard work. I’m not really sure I can see the “fairness” in that? Being forced to pay your government sometimes 70% of your hard earned dollars doesn’t seem all that fair to me.

The freetown of Christiania is truly unique and compares to nothing else in Copenhagen – or the rest of the world. … locals who work in the various small shops and cafees where you can pay with a special Christiania currency.

Why You Need To Visit Denmark's Hippie Commune Before You Die | Sharing Interesting Stuff, Updates News & Free Tips - May 13, 2014 Reply

Why You Need To Visit Denmark’s Hippie Commune Before You Die « BuzzCrimes - September 24, 2014 Reply

Why You Need To Visit Denmark’s Hippie Commune Before You Die | Viral News Worthy - January 8, 2016 Reply

Why You Need To Visit Denmark’s Hippie Commune Before You Die | Sing Viral - May 9, 2016 Reply

[…] without architects.” (You can see more creative, colorful Christiana architecture here.) Even the dumpsters are cool. This is Pusher Street, the “main drag,” where stuff like weed […]

[…] without architects.” (You can see more creative, colorful Christiana architecture here.) Even the dumpsters are cool. This is Pusher Street, the “main drag,” where stuff like weed […]

Why You Need To Visit Denmark’s Hippie Commune Before You Die | The Viral Beat - February 15, 2017 Reply

Why You Need To Visit Denmark’s Hippie Commune Before You Die | My Blog - March 19, 2017 Reply

Why You Need To Visit Denmark’s Hippie Commune Before You Die – WOWrly - May 18, 2017 Reply

Do you love everything micro? Start your own micronation. - Tiny House Blog - April 20, 2020 Reply

[…] might already be familiar with some micronations such as Christiania in Denmark, which the Tiny House Blog has featured in the past. Other examples include The United […]