The Tiny House Bed That Ignited A Furniture r(E)volution 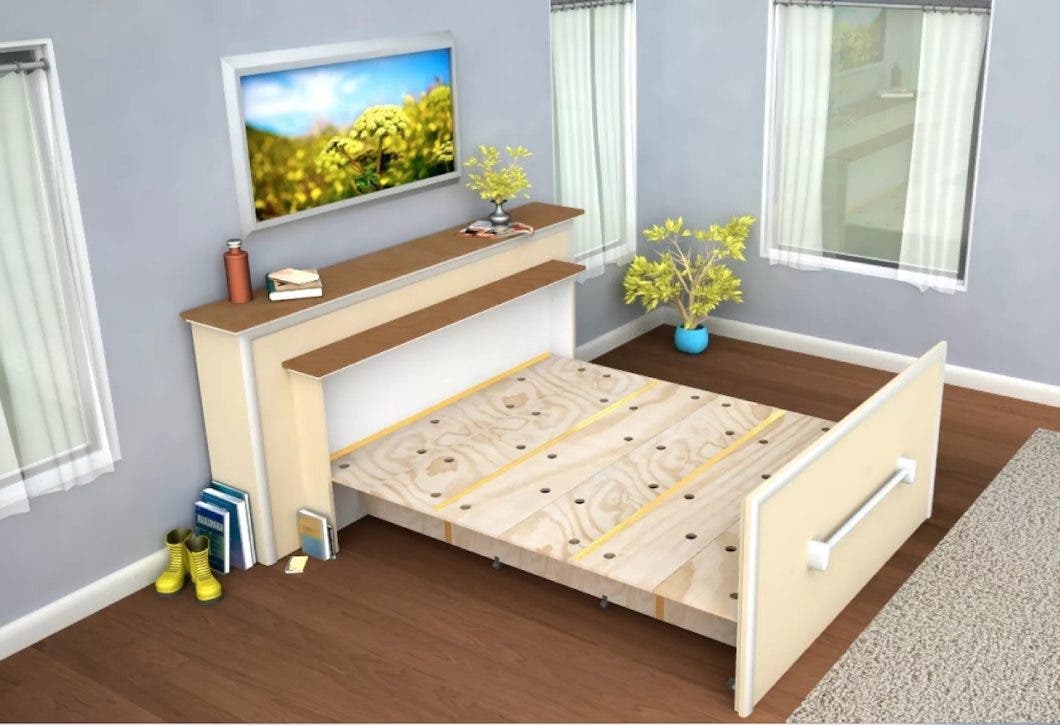 In 2010 when my wife and I started building out tiny house on wheels, we really had no idea what we were doing. Because there weren’t that many resources on the internet yet, we just thought about the build as a normal house fastened to a trailer. We must have done something right as the THOW is still housing two people safely and with architectural integrity. The one thing we didn’t do was build any workspace in the house (even though I was working from home at the time) or build a spare sleeping space. Once we moved into the house we had to remedy that quickly.

Years before my dad had seen a building plan for a bed that operated as a kind of murphy bed/accordion bed hybrid. He never thought it worked as well as it could though. So together we rethought the plan. As a tiny houser I wanted to make sure it could serve at least a dual function so I insisted it have storage space. That is where we got the idea of having the lid lift up for linen storage as well as a rack at the footboard to hold blankets, quilts, or scarves. We kept tinkering with quality of material, overall weight, the feasibility of rolling it in and out, and even the economics of the build.

After a few months, we had come up with a bed that seemed to check all the boxes. The only problem was we had documented little of the process, took only a couple of photos, and hadn’t made a material list or cut list at all. Because we also used salvage materials when possible, we also didn’t have any idea if those could be found in a store (I reference the casters primarily). 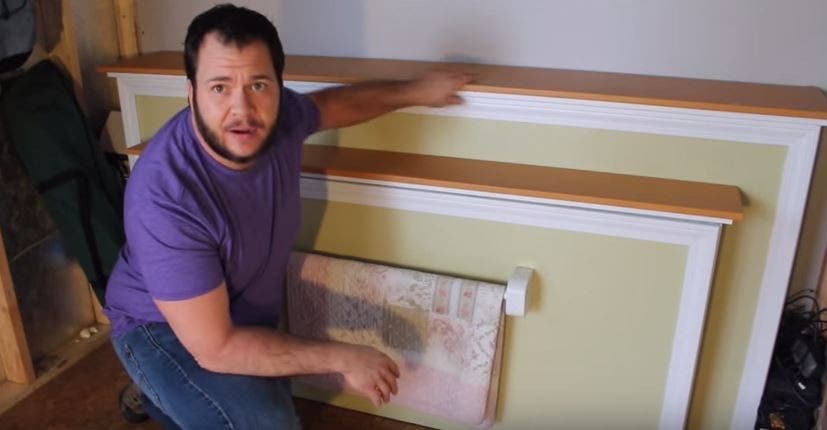 Andrew Odom – author and designer of the bed

The bed itself is essentially made of two boxes; the bigger one against the wall is for the storage of the then IKEA mattress(es) and the smaller one is the accordion-like platform bed that pulls out with the assistance of rolling casters. The build takes about 8-9 hours total and costs around $268 total (although lumber prices have certainly risen since then).

How The Plans Were Made

In order to write plans and get digital illustrations, I had to completely take the bed apart, do rough cut measurements, count fasteners, etc. Then I brought Malissa Tack of Tiny Tack House (a very talented digital artist) to do renderings of my sketches and photos. She did a masterful job and the final draft was more than I could have ever asked for!

The Problems We’ve Been Informed Of

For years now we have had people purchase the plan and then email to ask where the casters came from (TRUTH: I salvaged them from an old ottoman), what kind of hinges to buy (they are just regular brass, piano hinges), and why am I missing Letter L from the cut list (this was my first and only build plan so I knew little about the cut list). I am quick to remind people that the plans are now 6 years old and are more of a guide than a real explicit plan. With a little thought though, they are very easy to follow and improvise. While the bed is designed to be double size, the overall measurements can be easily adjusted for any size bed.

Where Is The Bed Now?

For years the bed served us well. We had no less than 25 guests sleep on it through the years. We ultimately ditched the IKEA mattresses and instead purchase a deluxe double size, pillowtop, air mattress from Cabela’s. But in 2018 or so we decided the bed needed to make way for more office space. So it was dismantled and now parts of it are in our front porch stairs, our Christmas village stands, my daughter’s closet, an outdoor planter box, and a moving dolly. So in essence, the bed is still serving at least a dual purpose.

Will The Bed Work For Me?

If you have a single-level tiny house or you have a small room where a bed just takes up too much room or you just want a bed that disappears when not in use, this plan may very well be for you. At $2.99 it has never increased in price and at last count, more than 400 of these tiny house roll-out beds have been made as far away as Norway.

Get a set of plans today.

If nothing else, gain some inspiration on how you can make your own build plans or give some life to a furniture idea you may have! 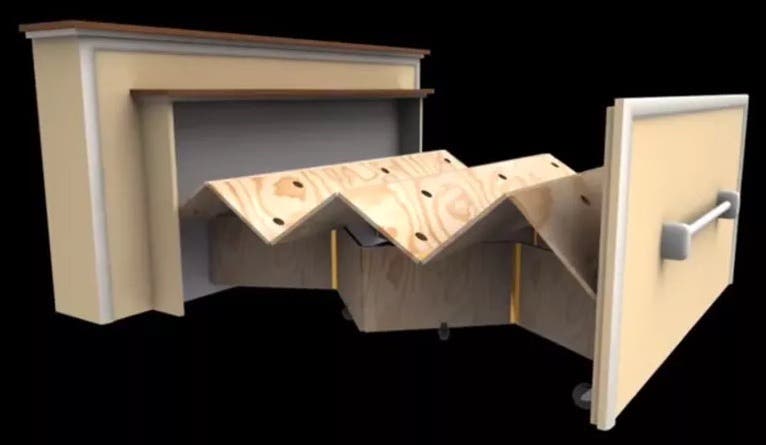 5 Ways to Turn Your Tiny House into a Hygge Haven

Embrace Your Inner Teen and Dump the Couch

Tiny Beautiful Balconies and How to Create Your Own

There is room for a junk drawer in a tiny house

There is no mention anywhere of the name of the author of this piece.

Andrew Odom of Tiny Re(v)olution is the author. He didn’t ask me to put it in but I will add it…

Andrew Odom – author and designer of the bed

There is not mention of the mattress and sizes of this unit.
Is this only a twin?