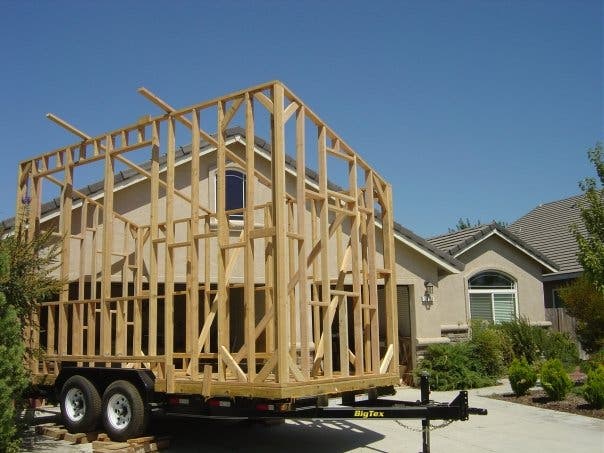 Lots of new tiny houses being built right now and Bill Brooks from the Central Valley in California has also started building a house for himself. Here is Bill’s story.

While I still plan on creating a blog, here is the background story for my tiny trailer house.

I am having fun building the trailer, and look forward to building more tiny houses some day. But for right now, I am focused on finishing this one. I wanted to visit Alaska for a long time, but was not looking forward to the winter cold. I read an article last year that sparked my interest in the Southeast (panhandle) area. The area does not have the extreme winters as the rest of Alaska. Also, the summers are mild compared to California. I decided I would like to go there, spend some time, and decide if I liked it enough to move there.

I realized that the regular accommodations would cost too much (hotel, bed/breakfast, etc) for a long term stay. So, I began looking into purchasing an RV. Finding a good RV was difficult, as prices were quite high. I decided a trailer would best fit my needs. I could leave it somewhere, drive around as needed, and have a place to stay. Somewhere along the way while researching trailers, I began reading about tiny trailer houses. The more I read about these tiny trailer houses, the more I felt they would fit my needs. Better insulation, more space, and simple living. With this, an idea was born. I would build a tiny trailer house and travel for awhile.

The more I researched tiny trailer houses, the more web sites I discovered. Several were blogs about people building their own trailer house. This appealed to me, as I always wanted to build my own house. I also discovered several sites that showed builders, such as Jay Shafer (Tiny Tumbleweed Houses) and Bill Kastrinos (Tortoise Shell Home). These were a great start, but I wanted to build my own. I researched more and discovered the Sonoma Shanty. I really liked the design, but it was not on a trailer. I decided I would be building a Sonoma Shanty at some point (in Alaska or where ever I located), so I purchased the plans. I was studying the Sonoma Shanty plans and determining how I could build it on a trailer. In the meantime, I was also researching more aspects of a trailer house, such as the electrical and plumbing systems. I did not find a lot of information on how to build these systems (and still have not), but I did discover Michael Janzen’s plans for the tiny solar house (Tiny House Design). Now here was a design that would accomplish two things at once, building a house and RV in one. Bill with one wall up

After that, things began to move along. I found a local trailer dealer, and got a good price on a 10,000 GVWR trailer. As soon as the trailer arrived, I began work on my tiny house on wheels. Since I did not have a blog, I created a Twitter account (@Brookswoodworks) and Facebook page (Bill Brooks) to update my progress. The rest, as they say, is history.

While I still intend to create that blog, most of my energies have been focused on building the house, as well as continuing research on the electrical and plumbing systems. I decided I wanted to make this house as self sufficient as possible. The electrical system will be based on batteries, and charged through solar and other means. There will be an inverter for those things that need 110 volts, such as a microwave, refrigerator, outlets, and lighting. There will be a shower and sink, but the toilet will likely be a composting one. The stove/oven combination will be propane. Even though the trailer will be well insulated, there will be a propane heater for warmth. The stove will be propane as well. I have not decided on the internal layout yet, but I will build the counters, shelves, and storage areas myself. I have been working on this since early August 2009. There is much more to do, as I have only completed framing the walls so far. However, it is finally beginning to look like something. The next few weeks should show much more progress as the trailer finally takes shape. Thanks a lot to Kent and Michael for their support and encouragement along the way.

Thanks Bill for sharing your story. I will do an updated post when Bill has completed his home. It will also be featured on the Tiny House Journal site, plus when Bill gets his own blog up I will let you know. Thanks Kent. I will keep you updated as I build this house.

as a former resident of SE Alaska, i can attest to the mild winters. However, the weather is still gloomy, with lots of rain.

That is completely awesome. Michael must be so happy to have one of his plans being put into action.

Congradulations to Bill as well. A few thoughts.

It’s not quite as confient, but if you’re intending to be in a place with ample resources, perhaps a wood burning stove would be better for you. Also, since you intend to be completely disconnected, consider putting a little “shed” over the tounge of your trailer. In this area you can put your propane tank storage, a space for a small, propain powered generator for backup, and maybe an insulated, vented battery storage, so you can use cheaper flooded (non-sealed) lead-acid batteries.

Finally, do all the 12V you can. An inverter + 120V appliances are often much more energy hungry than their 12V companions. Most small electronics (ipods, powered speakers, laptop computer, etc) either work with power transformers (which can be replaced with car adaptors) or have car adaptor power optoins. 12V lights are common, and 60W+ equivilent CFLs are very common now in most RV/boat shops.

Thanks for the tips Grant. I was planning to build the shed on the trailer tongue for the propane tanks and batteries.

I had thought about a wood stove, but decided against it for fire danger. I would hate to be towing it and have some ashes fall out or a flare up and then have it catch on fire.

That is a good heads up on the 12v. I will be checking with an RV store to see how their appliances price out. It may be the way to go on many things.

Would a pellet stove be safer? How about a high-efficiency pellet stove that can burn other things, since you may not be able to find pellets? We have one and they are very well sealed. When they are out, they are really out.

I will suggest that you have a mix of the 120 AC and the 12 DC as to cover the needs for both. Make sure the inverter is a pure sine wave, not modified sine. Go take a look at Home Power magazine for help with the ideas with solar. Get a Kill-A-Watt meter as to measure the power used by each electrical device and know the power needs before they are installed.

I plan on building the same tiny as you are doing. But, with some modifications. I will be using SIP panels for better insulation and other things. I plan on it having SIP floor, walls, and roof. Some changes around the door. Simple plumbing. Plenty of electrical wire as to make plugs near any spot in the tiny and each switched as to kill the load when it is not needed.

Seeing that the floor deck installed on the trailer, I am wondering if there is any thing you can suggest before I start to buy stuff. Does the back of the trailer slope? Do you think you will have a large enough loft to sleep in it? What is the slope of you roof or have you had to changed it?

That is a good idea about the kill a watt meter. I will look into that. I do plan on having 12v and 110v set ups both. I will just need to find a balance between them.

The trailer I selected was the Big Tex 10-cc in 16 foot length. It is a 10,000 lbs. GVWR, so I am sure it will handle the load. This trailer does not have a slope to it, unlike a lot of the other utility trailers. It has ramps that slide in underneath, and those can be removed as well.

I believe the loft will be large enough to sleep in if you sleep across the trailer width. The loft will be a bit under 8 ft across, and 6 foot depth. Just put your feet at the small end. If you get a smaller mattress, you would also have room for additional storage space too.

Because of the trailer height, I did lower the tall wall a few inches to keep it under the 13 foot 6 inch limit. In turn, I plan on lowering the loft joists a couple of inches as well to gain some of the loft space back. If you don’t like sleeping in the loft, you could use it for storage, and make a fold out bed on the solid wall.

[…] wanted to give you an update on Bill’s Solar Tiny House. You can view the first post here. Bill is constructing Michael Janzen’s free plans of the Solar Tiny House pretty much by […]