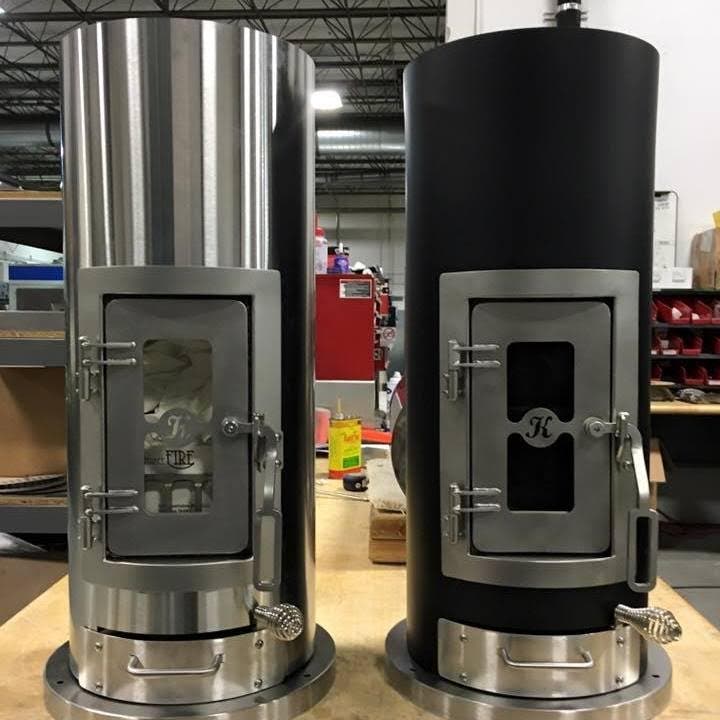 Looking for a wood stove made specifically for tiny houses? Look no further.

Heating a tiny house with wood can be a serious challenge, but that problem has been solved by Roger Lehet and his innovating gasifier stove called the Kimberly. With winter closing in fast, there’s no better to stay warm, and stay tiny, than with this particular model. The primary reason woodstoves often don’t work in some homes is because they require a minimum space clearance around them to operate safely, without risk of surrounding objects catching fire or otherwise being damaged. This model, with its sleek vertical design, only needs six inches of clearance around it, (which you will likely want anyway for easy access to maintain and clean the system). The whole thing is only about two feet high, ten inches in diameter and weighs just 56 pounds, but still produces around 40,000 BTUs of heat energy – more than enough for a standard tiny home, especially a one-room cabin design. The manufacturer claims it can adequately heat up to 1500 square feet. A number of really cool attachments have been developed for the stove as well, such as an adapter than can convert heat into electricity in order to power a bright, electric lamp. The top doubles for cooking, on or off-grid, and you can also convert the top of the stove into an oven or water heater.

If you ask me, the best part of this stove is that’s environmentally friendly. It only generates 3.2 grams/hour of carbon emissions, and it’s EPA and CSA-certified, (even in Washington state, where the regulations are particularly tough). Of course, it’s also convenient, because it can burn for up to eight hours on one load of fuel so you can sleep all night without having to stoke the fire in the chamber.

When it comes to downsides, it would be nice if this model had a fuel hopper, and the ash reservoir in the bottom is small and will need regular attending.  DIY installations generally take around half a day to accomplish, and materials associated with installation generally run in the $500 range.  For just $250, you can have a paid helper overseen by the seller of the Kimberly Woodstove.

Want to check out the Kimberly for yourself? Have a look at Roger’s website for the woodstove. Why You Should Invest in Wood Stoves Rather Than Regular Heaters

Want the Best Electric Combi Boiler for Your Tiny House?

I wonder if that is a typo on installation cost? At https://www.unforgettablefirellc.com/kimberly-wood-stove/ it says
Price & Value – TOTAL installation costs are similar to a $2,000 wood stove

Wow, this stove looks great! And what´s more than the look at and smell of burning wood, right? Although in my experience I would recommend have one more heating system, as a backup just in case and also it is nice to have something, which can warm up the place very fast, while you´re making the fire and waiting, until you feel any effect of it.

I (tiny houses supporter and designer) wrote an article about possibilities how to keep your tiny house warm, if you are interested, I always welcome feedback http://www.pinuphouses.com/tiny-houses-heating/