Cob Building – Off the Treadmill 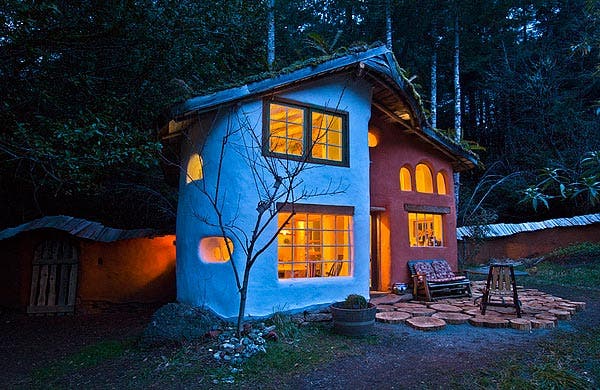 This movie is entitled “Off The Treadmill” and is about getting out of mortgage debt by using the very ground we stand on to build our own homes. “It’s dirt cheap”, says Ianto Evans, master cob builder and architect at Cob Cottage in Southern Oregon. This film was created by Chris Tilt.

Earth is still the world’s most common building material. The word cob comes from an old English root meaning a lump or rounded mass. Cob building requires the use of hands and feet to form lumps of earth mixed with sand and straw. This is a sensory and aesthetic experience similar to sculpting with clay. Cob construction is easy to learn and is inexpensive to build. Because there are no forms, ramming, cement or rectilinear bricks, cob lends itself to organic shapes: curved walls, arches and niches. Earth homes are cool in summer, warm in winter. Cob’s resistance to rain and cold make it ideally suited to cold climates like the Pacific Northwest, and to desert conditions. what a delightful small house, the colours make it look friendly and warm. Houses like this are an excellent way to build in an environmentally friendly way

When I see cob houses, I always wonder if they can be insulated. I live in the northeast, where it can get really cold as well as really muggy and hot. Can cob be used successfully in this environment?

You can always go with straw bale outer walls, it has a fairly decent insulation value and you can do a lot of the cob aesthetic too.

Ziggy over at The Year Of Mud http://small-scale.net/yearofmud/, built a cob house in far north east Missouri. After two winters, he’s come to the realization that cob is NOT suitable for very cold climents, due to mold problems and difficulty in heating. Cob is NOT an insulator, it’s is a heat bridge, and in cold areas will sap heat from the interior.

I have always admired Linda Smiley. Her chapter in the the book, The Hand Sculpted House, is inspiring and beautiful.

I believe in his book The Hand Sculpted House, Ianto mentions that cob is not an insulator- it’s a thermal mass, so a cob building should be designed with passive solar energy in mind because it will capture that solar gain and store and release it well. But it’s definitely not an insulator.

i don’t get how the 2nd floor is supported. anyone know?

Typically round wood beams are supported by the exterior cob walls. In Linda’s house there is also a central post which is part of the stairs.

cool, thanks for the info!

What a delightful video! Thank you for posting it! I have admired what Cob Cottage is doing for the past five years that I have known about them!

Mr Evans appears to be a very relaxed man… at peace with his life, his surroundings and what he has accomplished in life… what a wonderful feeling that must be. Thank you for posting this short film, it’s full of inspiration for all.

While I agree with much of the analysis of the architect-centered building industry, I also agree adobe (what he calls cob) is better for drier areas. The Maritime NW does have wet mild winters, but dry summers, so with a wide overhang, cob works there. In other areas, adobe and other earth based material have historically been added as a sealant, often decoratively, over as substrate of brush, wood, etc. In north and in cool wet climates, you have to be able to assume sufficient solar gain and calculate (however roughly) the appropriate amount of mass. Better to use materials better suited for the climate.

I am baffled by his claim to have been the first in North America to ever build with earth mixed with straw etc. That sounds ethnocentric, and maybe egocentric. To make that statement, he has to ignore the fact that many indigenous people of North America built with earth materials; how can he not be aware surely he is aware of the many large, intricate pueblos of the SW, and the various styles of homes, from huts to halls, all over the continent made from earth. In addition, many earth-based homes were built by non-Indian immigrants, especailly those from southern Europe) from the beginning of their presence here. It was also a European traditional method of building, often using a framework of some sort.

The value here is helping people to once again become aware of traditional methods of building homes they’ve lost touch with, and to know that they can do it themselves, using on-site materials (and cast-offs) as much as possible. There is still value in what has been learned and developed by community grounded architects and building materials. Not everyplace is suited for this kind of building. Most owner-built homes (to use an old term) are likely to be hybrid. Encouraging is the movement in urban areas to allow this kind of housing, recycling used materials, and innovative use of readily available materials.

I love the shapes that can be formed and sculpted into the home.

The Missions in California were built with ‘natural fiber re-inforced, stabilized earth’ and have endured centuries of earthquakes. As I understand it, they tend to settle each time there is a quake but they dont fail catastrophically.

It was like a light igniting in the heart, I want to go ‘Cob’ but where do you start?
Blow the kids inheritance!!