The Man with the Million Cabinet Apartment - Tiny House Blog

The Man with the Million Cabinet Apartment 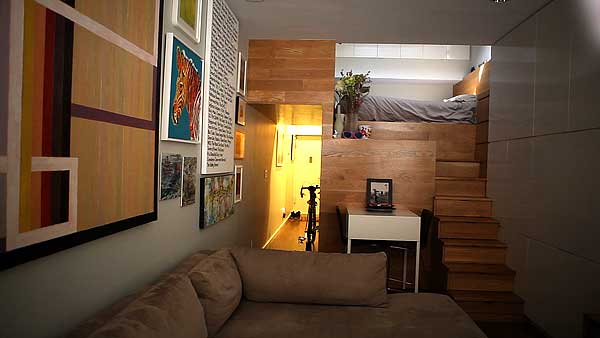 I work with the guys behind YouTube’s home and design channel SPACEStv (NYT) and wanted to send you the newest episode of “Tiny, Eclectic, Amazing Spaces,” a show which profiles people living large in small spaces. Michael Pozner (former Head of Retail Development for American Apparel) and Darrick Bowoski (Creative Director at Jordan Parnass Digital Architecture) take viewers on a tour of Michael’s 500 sq ft apartment, filled with more than 50 bespoke cabinets and drawers in New York City’s East Village.

Michael and Darrick also offer two pieces of advice on how to maximize and re-discover space in any teeny apartment: Very ingenious ideas, but the guy on the couch looks like he’s hungover!

Such an amazing space. I’ve seen pictures of this home floating around on the internet; so glad to finally ‘see’ it in all of its glory. What an amazing use of space. The stairs to the loft as drawers? Genius idea! The placement of the washer and dryer are great as well. One question for Michael or Darrick: The skylight in the loft area, was that there prior to the remodel, or was that something you added?

Very well done. The drawers in the stairs are clever.

Didn’t see much of it but that laundry setup next to the fridge looked interesting.

Yes – where did you get the clothes washer!? Beautiful home.

Such clever storage. I love the details that make it so personal and homely.

Oh my gosh,the picture of the red barn in the video was a paint by number that my deceased parents painted together when they were newly married! Gave me goosebumps seeing it!Loved the apartment,so functional!

[…] And for fun here is a link to a 500 square foot house called the ‘Man with the Million Cabinet Apartment’. […]

Turning every step into a drawer?! That’s an amazing idea but requires a little more carpentry skills than I certainly have. But if you have the know-how why not make it happen?