Santa Cruz County, CA, November 2022 – Santa Cruz County Supervisors led by First District Supervisor, Manu Koenig, unanimously passed SCCC 13.10.680 to legalize tiny homes on wheels as single-family dwellings to provide a lower cost housing option in the County, which is particularly needed by those who lost their homes in the CZU lightning fire in 2020. Making good on his campaign promise, Supervisor Koenig along with Supervisor McPherson shepherded the new ordinance through the arduous process of the many commissions, public hearings, staff research and reporting required to make a change in the County’s definition of housing. By defining a tiny house on wheels as a habitable independent dwelling,

people may now move a tiny house on wheels onto a residential property, and then live in it. This will save years off the usual process of building a house, obtaining many building permits, inspections, and costly utility hookup requirements. The new permits will be available via a “ministerial” process. This means that the county staff must grant a permit if the requirements are met. There is no opportunity for planning staff to delay or deny a permit application based on their opinions, which has been a major point of contention for other home builders.

Numerous jurisdictions in California had already legalized THOWs – The city of Los Angeles, city of San Diego, city of San Jose, city of Oakland and county of Santa Clara being the largest. Smaller areas including San Luis Obispo, Humboldt, Fresno, and even Ojai, beat Santa Cruz by legalizing THOWs to be used as accessory dwelling units, also known as granny flats. However, Santa Cruz County is the first municipality in the state to legalize THOWs as both accessory units and as primary homes. In Santa Cruz County a property may have a THOW as it’s first and only dwelling. It isn’t necessary for a stick-built single-family dwelling to already be on the lot. Oakland is leading in the process to permit tiny home villages.

THOWs could be a game changer for creating housing in the places such as Santa Cruz, described as the worst housing markets in the country year after year. 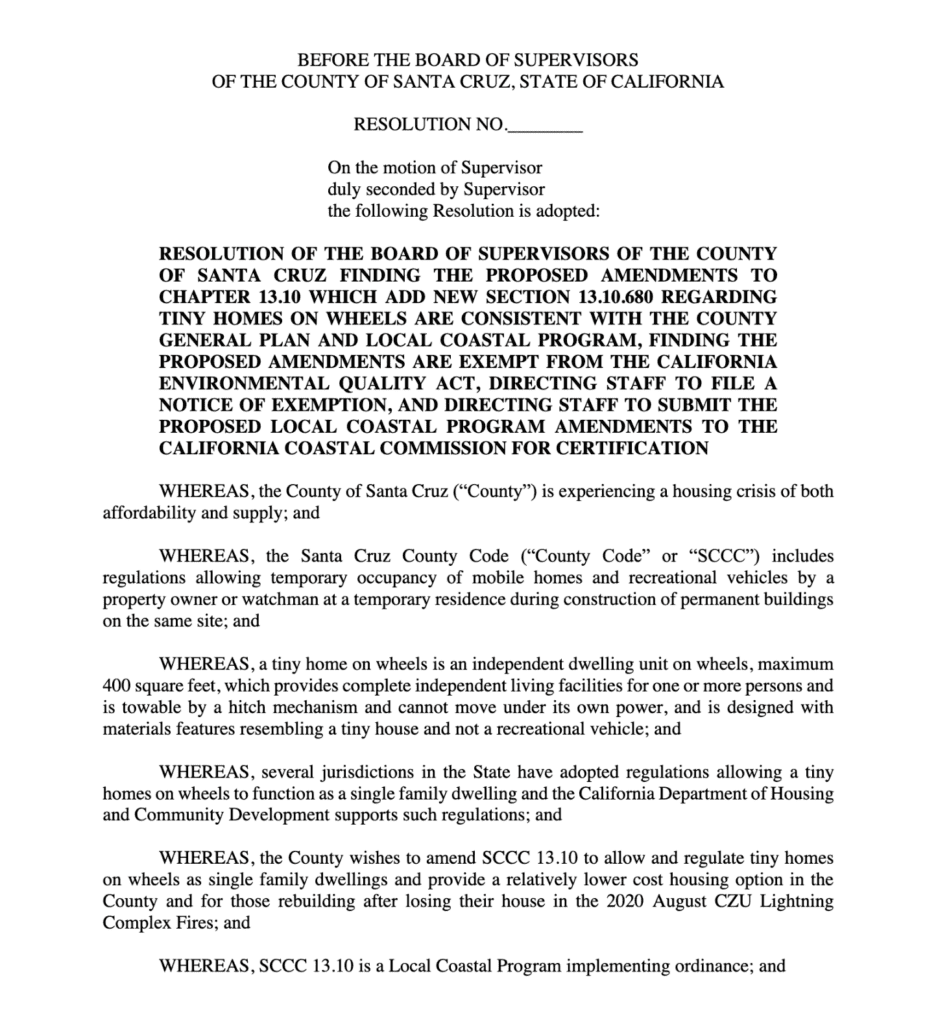 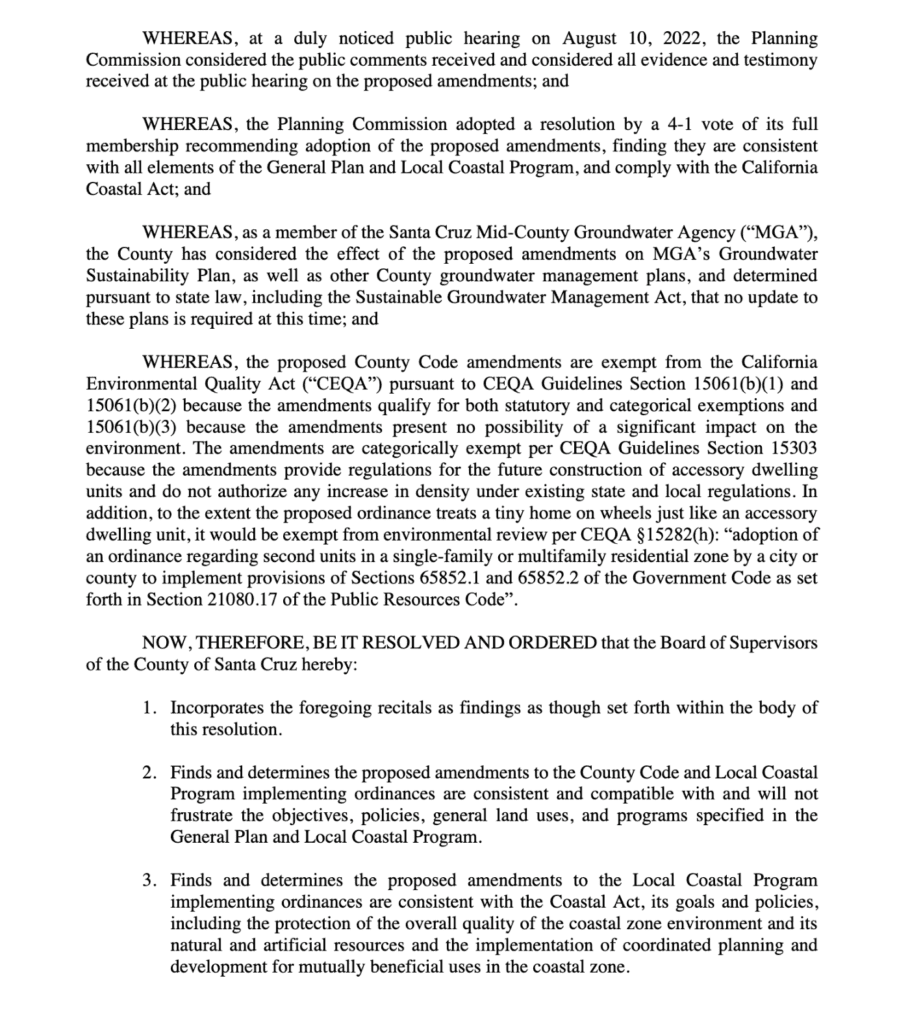 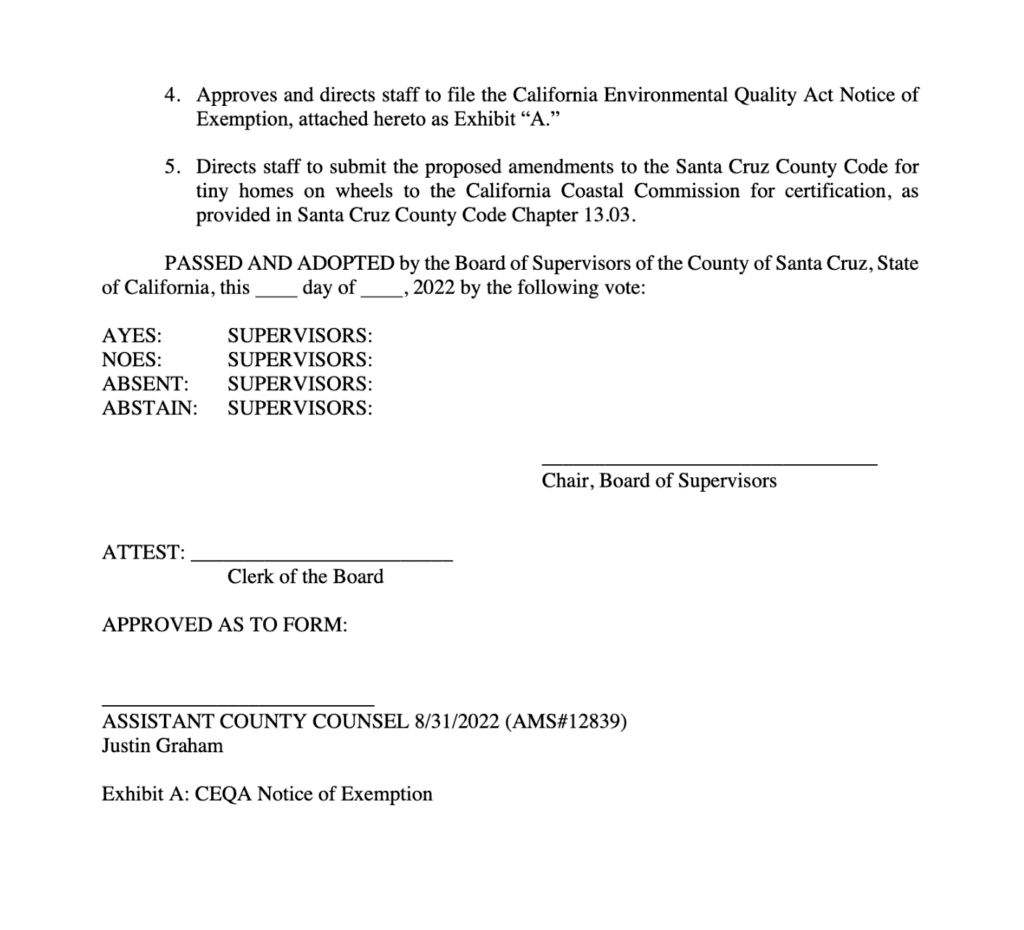 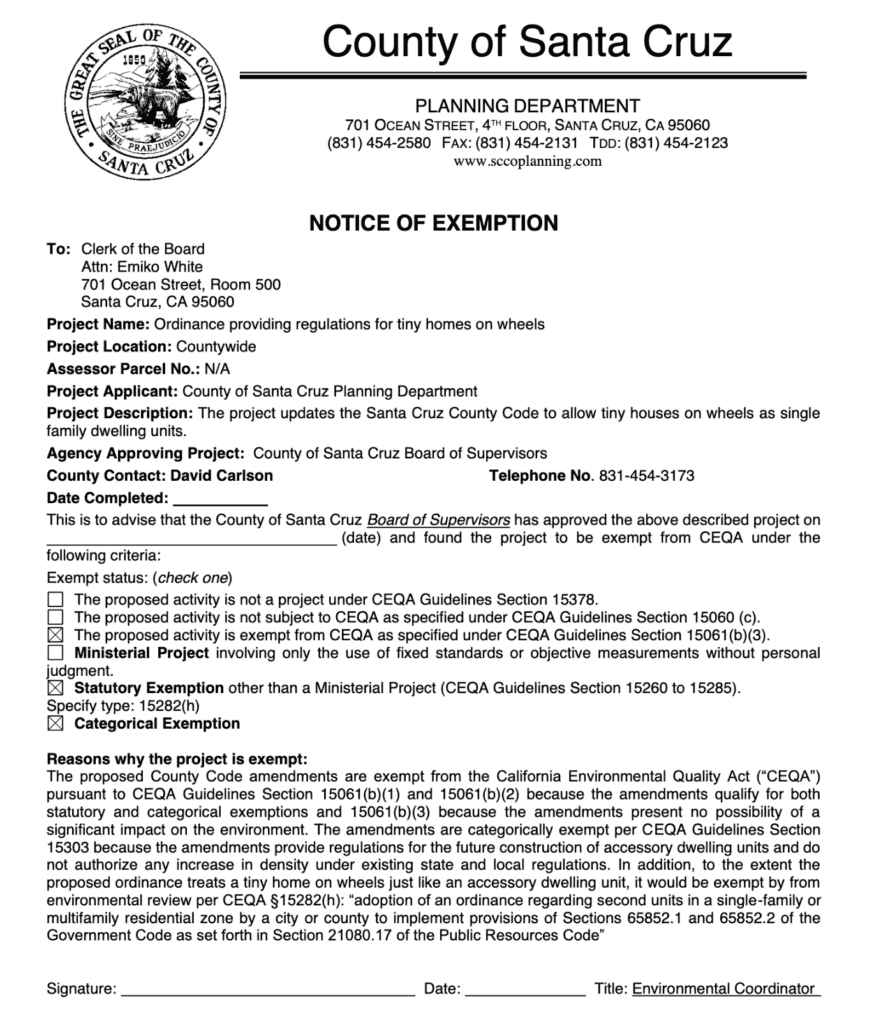 Thanks to Tiny House Alliance for breaking this news!

Thank you for sharing this breaking news and linking back to the Tiny House Alliance USA for breaking the story.

I have another update.

The THOW ordinance was adopted at a second reading on December 6th, and it can take up to 10 business days for a completed signed ordinance to be posted to the Board of Supervisors website. (Please also note that the ordinance will not be in effect until 31 days after adoption.)

This is a very nice Christmas present for the industry.

Please edit the story to the second county. I was reminded that Placer county was first.

I edited my article that you shared and added information about Placer that I had originally
written about.

Just keep it simple. As long as a home is not a threat to anyone’s health or safety, then any restriction against that home is null and void. So, ALL housing options should be on the table on any residential lot anywhere in the US. You should hook up to water, sewer and electric at a minimum. That is for the health and safety of the community at large, the police power. I am thinking more in terms of a permanent home. You will always need some place to live. If you want to live in a motor home, in a travel trailer, in a singlewide as I do, as well as any other option you choose, then that should be available to you.

I am not opposed to any restrictions for the health and safety of the community at large. So, it is OK to zone one area as commercial and another area as residential. But once an area has been zoned as residential, then all housing options should be on the table. This is both pro-choice and pro-life. Pro-life because SHELTER IS A NECESSITY OF LIFE. Pro-choice because your money, your house, your life and no one else’s business.