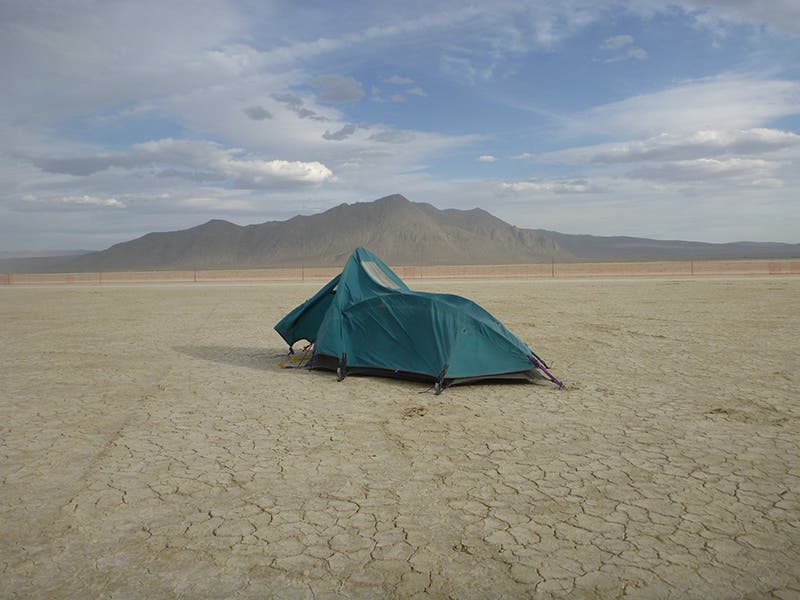 The theme for this year’s Burning Man, Caravansary, might be one of the most perfect for how the event works. The Persian word means either an Asian or North African inn for desert travelers or a group of people traveling together in a caravan. Both describe Black Rock City and its tiny houses to a “T”. For the people “living” in Black Rock City for the week of Burning Man, their caravan shelters include tents, wooden structures made from pallets, colorful trailers, domes and wagons. This year, we were stunned to realize we were camped right next to Philippe Glade of the This is Black Rock City blog. The Tiny House Blog featured his book, Black Rock City, NV: The Ephemeral Architecture of Black Rock City last year and his new book is now in the works.

Many structures at Burning Man are elaborate and take hours or days to erect. Sometimes the most beautiful are the most simple. This tent was located way beyond the city near the “trash fence” that surrounds the event. Other tents are still built from simple materials, but have more exotic shapes. Just a step up from tents are Costco carports and other prefabricated shelters. This is the Museum of Cultural Appropriation and Dead Things and the Museum’s bar — not open at this time. It’s always nice to get a little elevated above the desert. These structures are build with wood and wooden pallets and some are placed on top of truck beds or on top of RVs. Trailers are sometimes unrecognizable in Black Rock City. A cargo trailer becomes a conestoga wagon, a canned ham becomes part of the Nakked Zebra boutique camp and Jay’s eclectic Scamp sits in the middle of Kidsville. Domes are very popular and quick to erect. This one is a bar and nightclub reminiscent of the Mos Eisley Cantina from Star Wars. This interesting structure has windows to let in the fresh air. This patchwork yurt offers the gift of storytelling. The beautiful bunk tents at the Ashram Galactica camp can be won during a nightly lottery. The Hardly Hotel offers rooms for rent, a bar and a “Thriller” Flash Mob. This beautifully painted tiny house is located in the Department of Public Works neighborhood. The DPW are the people who build Black Rock City and live in the desert for sometimes eight to ten weeks. The Burner Ready, Burner Born group from Reno, Nevada decided to tow their entire sailboat out to the desert. Both of these camps brought the tropics to the desert. Two of the most beautiful structures in the City this year reflect the craftsmanship of many of the people who come to live here. While the steampunk house on stilts from the Lost Nomads of Vulcania was not a camp, it could be lived in. Welcome to Black Rock City. Wish you were here.

Wow, so much creativity… it’s hard to pick a favorite! I really like that bunk tent though 🙂

So enjoyed reading this story. Wonderful to see how creative people are when they are not tied down by rules.
Maybe some day I will make it to burning man. I heard the tickets sell out and are almost $300, but you only live once.

Christina, thanks for the vicarious visit through Burning Man! I really liked the steampunk art by Lost Nomads of Vulcania. Very cool!

What about Hexayurts? http://www.hexayurt.com/ There are now 14 configurations based on the basic design. They are an extremely popular housing option at Burning Man. I’m surprised they didn’t end up in your piece.

Thanks for your comment Brent. I was actually at Burning Man in 2007 when the first Hexayurt was on display on the Playa. I’ve since profiled the many different configs, sizes and designs of the hexayurt in my past Tiny Houses of Black Rock City posts on the Tiny House Blog. You can search for them on the site.

I enjoyed this article sooooo much! We are blessed with folks who have amazing minds and hearts. I don’t know if I could tolerate the heat of the desert but I would sure like to get to Burning Man at least once.

We might have to bring our tiny house to Burningman next year! I just learned that we’re only 280 miles away here in southern Oregon. Thank you for sharing these pics.

Oh how I love/hate Burning Man. Has to be experienced, people! Must go again before I die.

I would love to go to Burning Man. Only recently learned of it. This looks like a lot of fun & I love the creativity put into the temporary dwellings, night clubs, etc…

Valerie, Burning Man of Black Rock NV is getting too pricey, over $500/pp. I suggest a smaller version. Does anyone know if or where there are smaller and less expensive versions?

I went to Burning Man post Burning Man, in October, 2014 for 4 days. I’ve never dreamt of spending time with 25,000 of my closest friends on a playa that blows like the dickens. That said, I enjoyed the photos of all the creativity. Living in Boise I have many burner friends and you captured the flavor of the diversity of habitation. Thanks for sharing. I liked it with virtually no one there, except the hunters who were getting skunked because it was so nice out for early Fall. And the hot springs nearby are fabulous as is driving out and experiencing the Black Rock playa with NO ONE there. Cheers.