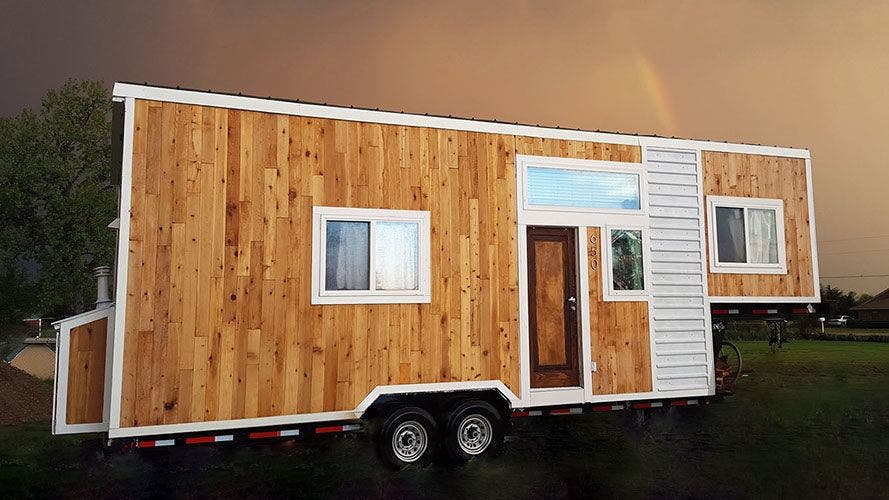 At 22 years old, I was on top of the world. I had just obtained a Bachelor’s from one of the country’s best design schools without any debt, I’d already started an amazing career at a well-known advertising agency, and I ran by own side-business in the evenings. Everything was going my way. So, I decided to reward myself with something I’d always secretly wanted—a motorcycle. Little did I know this bike would be the catalyst for my tiny house.

Once I made the decision to purchase a motorcycle, I got to work finding the perfect bike. I even took riding classes before meeting up with a Craigslist contact. I left my apartment with $3,000 cash and returned with a new favorite toy. I was elated. After two days of practicing in a parking lot, I built up the courage to actually ride to work. The way there was fine, but it was on the way home that it hit me. “It” was a big, black, SUV.

She was distracted by her cell phone and blew through a stop sign. My plans for the upcoming weekend, and my left femur, were then shattered. I’d never broken a bone before, but I lead a “go big or go home” lifestyle, so it seemed appropriate the largest, strongest bone in my body was shattered into a thousand pieces. I was thrown from my bike, helmet wrenched off. Through recovering from full-body road rash and undergoing a series of surgeries on my leg didn’t seem too positive, the experience would change my life forever.

While cooped up after surgery, I came across a click bait article titled “Couple Builds Home for $22,000”. I watched the accompanying video, thinking this 200-square-foot home was absolutely insane. Who the hell would even want to live in a space that small? As time passed, I began to see more posts about Tiny living. Call it divine intervention (or tracking algorithms), but the more I saw the more intrigued I became. I started to understand how SOME people lived in tiny homes and even imaged a hypothetical one for myself. Tiny houses had taken up permanent residence in my brain.

The next few years brought waves of enthusiasm about, and avoidance of, tiny houses. Just as I’d get excited about building a house, the stress about money, inexperience, and massive scope of the project would shut me down for months at a time. Then, I’d wander to the opposite extreme of needing to build. I knew renting apartments was a waste of money and felt stifled by the prospect of building a permanent structure home. After spending a deal of money on a new car, I realized this mental back-and-forth was ridiculous. Even if I utterly failed at going tiny, I knew I had to try. Over the next few months I contacted an architect, a trailer manufacturer, a shell fabricator, and found land to build my new home. I painfully wrote a $12,000 check for my trailer and walls, knowing I’d thrown myself past the proverbial point of no return. I did my best to keep busy with prep work in order to distract myself from this insane decision. On September 2, 2015, my trailer arrived at the home of the parents of one of my good friends. The next day the walls were delivered. The day after that, September 4, construction began.

10 volunteers gathered under the blazing Texas sun. Over the course of two days, and with the direction of Artisan Tiny House’s Patrick Sughrue, these inexperienced builders created the shell of my new home. We battled triple-digit heat, heavy paneling, and utter exhaustion. In the end, though, we were all exceptionally proud of what we’d built.

The tiny house became a second job of sorts over the next four and a half months. I would work my 8:00-5:00 day job, anxiously awaiting to rush home and start my real work. I’d eat, throw on battered work clothes, and make the half hour commute to the build site. I’d work until 1:00 in the morning or so, then get up the next morning and do it all again. Finally, on January 15, 2016, I left my over-priced city apartment and moved the last of my possessions into my (still under construction) new home. I kept my full-time job for the next month and continued to build late into the evening. I soon became fed up with agency life and made the decision to quit my corporate position and begin my own marketing firm. Thankfully, my existing freelance clients were excited about this prospect and ready to expand the scope of their work. For the first time in my life I felt totally in control. I owned a home, started a business, and was debt free with the financial stability to live each day as I wished. Of course this major life transition came with several stumbles and much uncertainty, but each challenge was welcomed as a chance to develop myself.

One major challenged occurred in March when I was asked to exhibit my less than finished home as Earth Day Texas 2016. I agreed to participate despite my home being in no condition to be seen by 75,000 the following month. I rushed to finish projects before moving my house for the first time in April. The house was rock solid, but I was a mess.

My home was seen by 5,000 people on the grounds of the Texas State Fair. 3,000 more saw Terraform at another exhibit a few weekends later. Many of these individuals had never seen a tiny in person. It was surreal to be considered an “expert” by so many since I was still in disbelief I’d even accomplished a such a build.

The summer months continued to be eventful. In June I was approached to be on HGTV’s hit show, “Tiny House Hunters.” I originally turned down the network because they wanted me to say I simply bought my home. After some negotiation, they agreed to let me tell my building story. I toured homes on the show for “inspiration,” one of which belonged to a friend of mine. We shot her tiny home Friday, then packed it up for a cross-country move the following Monday.

I prepped a second “tiny house on wheels,” as a travel vehicle. My Honda Element soon became a 32-square-foot micro camper for a two month excursion to scout for a new place to put big tiny house. The trip turned into four months and my car became my home. I rushed through the last leg of my trip to make it back to Texas for the holidays, I returned home and was overwhelmed at the excessiveness of my 250-square-foot tiny mansion. I had become so comfortable in the car, even through freezing nights and giant storms. My experiences had far outweighed the need for the comforts of a traditional home.

I think my tiny house experience was similar to most others. A life changing event prompted contemplation and the need for change. The change takes form as a tiny house. Fear, doubt, and overwhelming scheduling almost crushed my tiny house dreams, but in the end it was all worth it. I learned the do it yourself mindset in a tiny house goes far beyond simply getting a roof overhead. The ability to problem solve and willingness to get your hands dirty to accomplish an insurmountable goal transfers to many things in life. A community willing to gather around an individual trying to follow his (crazy) dreams brings about renewed faith in humanity. And the opportunities to teach, inspire, and help others meet their goals is endlessly rewarding.

All I wanted out of a tiny house was a cheap place to live. I got so, so much more. A tiny house isn’t just about the home, but about the life it allows you to create.

For more information about my tiny home and adventures, please visit TerraformTH.com, follow me on Instagram @TerraformTinyHomes, or send me an email at Richard@TerraformTH.com