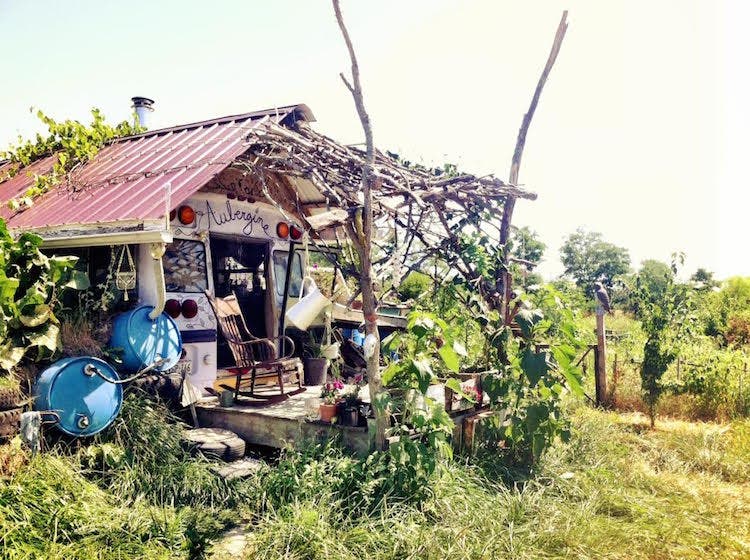 Eco-artist and innovator in radical recycling, Katherine Hanson, is living her American Dream in harmony with nature.

Katherine’s tiny house is timid and easily overlooked amidst the lush greenery of spring or the thick snowfall of winter, but she is still my vote for the coolest house at Dancing Rabbit Eco-village. Her name, (I’ve been told she identifies as female,) is Aubergine, and she is living out her golden years in peace and quiet following a long career in education – you see, Aubergine is a converted school bus. (I wonder what all those children would think if they could see the old yellow dog now?) At one time, Aubergine was the only running vehicle at Dancing Rabbit, (she even rushed someone with a broken leg to the local hospital,) but now she rests behind an earthen berm on a foundation of gravel-filled rubber tires. She is insulated with rigid foam, and apart from the thin steel framework of her body, she has a conventionally built roof that feeds water into a system of daisy-chained rain barrels, which Katherine uses to water her expansive garden. All told, the construction cost for Aubergine fell under $6,000 and she took several years to build with the help of many hands. With 150 square feet of interior floor space, the home is outfitted in a very eclectic style with wooden furniture bearing as much character as any artist could desire. Katherine likes to decorate her space with the everyday items that she uses, such as her colorful collection of summer sarongs, an assortment of books, bottles and other baubles, and a tiny succulent growing in the spoon of a stainless steel ladle. Aubergine’s single-pane windows on the port side, though narrow, provide a panoramic view of passersby, while the starboard windows look into a 150 square foot greenhouse, which adjoins directly with the living space via the old articulated door of the bus. Positioned on the southern exposure of the building, this greenhouse heats the entire home quiet well in winter. On the day that I visited, it was 13 degrees F outside with a subzero wind chill – the greenhouse boasted a temperature of 74 degrees, while Katherine’s living room was kept at a comfortable 68 degrees. A cast iron wood stove heats the space at night, along with Katherine’s morning tea, or a pot of Texas-style pinto beans. In summer, the front door, (formerly the emergency exit,) can be left open along with the portal to the back porch, which turns the entire house into an effective breezeway that cools the space without need of electricity. “When I first moved into Aubergine,” Katherine told me, “I was renting her just to have a place to stay. Eventually, the previous owner put her up for sale and I had to have her! She’s so cute, and she’s so perfect for me!” Katherine and her partner Nik plan to build a larger home next year and begin a family, but she made it perfectly clear, with one hand placed reassuringly on a wall, that she will never give up Aubergine. “When my child turns twelve, they can stay in her!” There is no bathroom inside Aubergine, because many of the members at Dancing Rabbit choose to share common infrastructure with one another. The intention is to spare the use of valuable resources by inviting people in the community to utilize a common showering facility, for example, rather than each family unit having to build and maintain its own at the expense of space, materials and real estate capitol. This principle also encourages a genuine sense of community in the village as everyone is likely to cross paths with everyone sooner or later, which leads to real and lasting connections between neighbors. Aubergine’s windshield, known as Duck TV, has become a particularly interesting feature of the home, because through it Katherine can watch her flock of Khaki Campbells from her bed, which rests in the former place of the driver’s seat. The birds love to congregate on top of the engine housing to preen and wag their tails, adorned for Katherine’s eyes alone by the bright hues of many colored bottles studding the earthen plaster cladding that insulates the windshield. During the growing season, Katherine loves to spend time in her adjacent garden with her constant canine companion, Sir Henry Royce of Dinkleton. There are several fruit trees in her garden, along with various seasonal vegetables like kale and horseradish, (Katherine is famous for strawberries,) and mature grapevines eagerly climb the trellis around her porch to access the roof where they sprawl throughout the warmer months. I asked Katherine what the downsides were to living in Aubergine and it took her a while to think of anything to say. “Well, I literally can’t jump for joy,” she finally admitted with a laugh, referring to the six feet of headroom inside the structure, “but if I could, I would!”

She could not resist adding with her omnipresent Cheshire cat grin, “I’m also allergic to eggplants.”

If you would like to commission a work of art from Katherine or read more about her eco-pioneering adventures at Dancing Rabbit Eco-village, you can reach her via the Critter Blog: ‘Clawing Our Way to Sustainable’! This is fantastic, I love it! 🙂

I’m surprised she didn’t mention the wool insulation in the attic, or the magnetic nature of the interior. You can stick a magnetic hook virtually ANYWHERE!

I love Aubergine, too! Got to hang out there in the ecovillage for a couple of months when I did an internship next door to Dancing Rabbit at Red Earth Farms back in 2009.

Personally, I think it should be noted that credit for Aubergine’s existence should go to the woman who actually did all of that work. Her name is Liat. She is the one pictured in the maroon hoodie in the third picture and in this post only passingly referred to as the “previous owner.”

Well, Liat was a lot more than just the previous owner. She was the one who actually bought the bus, had it hauled to that location, bermed one side over with earth, insulated it with wool, painted it, built the greenhouse, created the water catchment/storage, built the porch and branch shade structure, and planted the initial gardens. I was there when she was finishing the berm, planting the food, and burying the rain and storage barrels.

Please don’t misunderstand. I have nothing against Katherine. She looks like the loveliest of people and I’d love to meet her some day on a future visit! I also should admit that I haven’t visited Aubergine in the past handful of years, so I can’t say what additional changes Katherine has made beyond aesthetic decoration. Perhaps the cob and wine bottles? I don’t recall those being there in 2009.

My point is, along with the mention of Katherine, I would love to see credit also go to whom credit is due. And in this case the vast majority of the credit belongs to Liat, who dreamed up this lovely tiny home and brought it into being.

Thanks for letting me add a little bit to the history of the story!

Wow, Liat you have done such a wonderful job…….I love your work!

[…] Hanson is a radical recycler whose tiny dream home is made out of an abandoned school bus.  It only cost around $6000 to […]