Artsy Couple Turned a School Bus into a Loft on Wheels 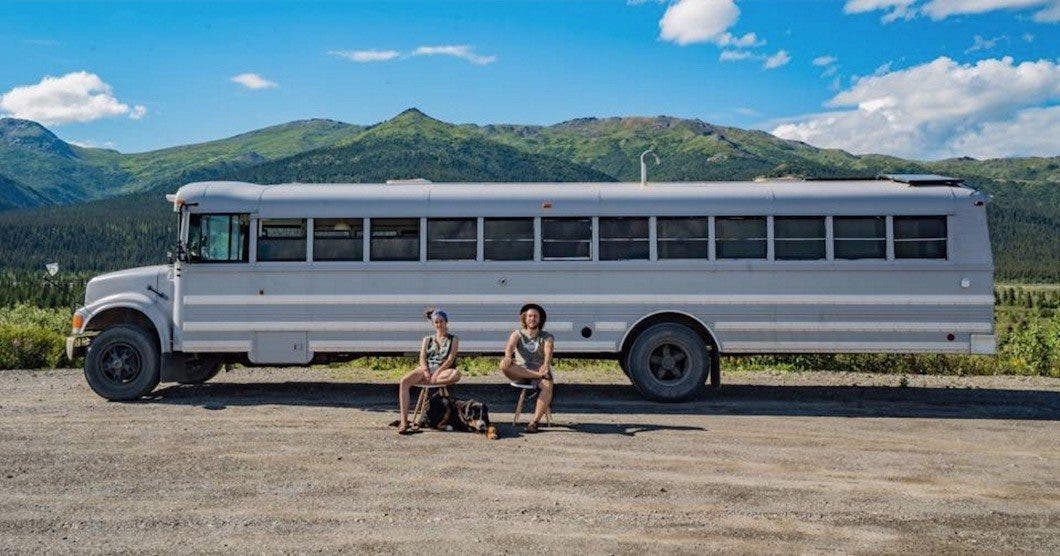 One day we woke up in our loft in Berlin and it didn’t feel right anymore. We’re both self-employed and had just released an album (Selima) and a movie (Felix) so we’ve had a pretty hectic year. Our Bernese Mountain dog puppy had just joined the family and he hated city life.

Looking around online we saw a converted school bus by coincidence. Two days later we bought one ourselves online and booked flights, a month later we boarded the plane to America. Converting was harder than we thought, we both didn’t know what we were doing but figuring it out along the way was awesome. We learned a lot and are super happy with the outcome – our loft on wheels – as we like to call it because of the airy feel of the design. We faced some challenges both converting and on the road but it was always worth it.

The 200 sqare feet are more than enough for all of our stuff and we love the concept of a simple life that is still comfortable. Limiting yourself space wise is refreshing and you don’t need to compromise on design and comfort if you don’t want to.

After converting we took the bus on a roadtrip. We crossed Canada, drove up to Alaska and now the only direction is south. We’re traveling on the Panamerican Highway through the states and central america. We’ll keep going until we don’t like the road life anymore or the bus breaks down. We don’t have an ultimate destination – the journey is the reward. Great job! Curious as to how much money it cost you

Wow you guys are livin’ the dream and I am living through you with living in a “tiny home”. You both have done an amazing job with this bus!!! I am following you now on FB and You Tube and anything else you decide to do. I can’t believe what it looks like inside. Totally my style, lots of wood and a dog! My dogs would be quite happy in there especially on the bed! Thank you for sharing this wonderful adventure and can’t wait to see where you are next.
Victoria, BC
Canada

Wow, lovebirds, you are my heroes! Your home looks amazing and you did a wonderful job!

How Did an Artsy Couple Turn an Old School Bus Into an Awesome Loft? - Cambodia Property - September 15, 2016 Reply

[…] Documentary filmmaker Felix Starck and musician Selima Taibi were so inspired after randomly seeing one such transformation online, they bought their own 1996 bus for $10,000 on the internet two days later, according to TinyHouseBlog.com. […]

How Did an Artsy Couple Turn an Old School Bus Into an Awesome Loft? | Realtor.com® - October 29, 2016 Reply

[…] Documentary filmmaker Felix Starck and musician Selima Taibi were so inspired after randomly seeing one such transformation online, they bought their own 1996 bus for $10,000 on the internet two days later, according to TinyHouseBlog.com. […]