Igloos and Ice: the tiny houses of the Inuit Culture - Tiny House Blog

Igloos and Ice: the tiny houses of the Inuit Culture 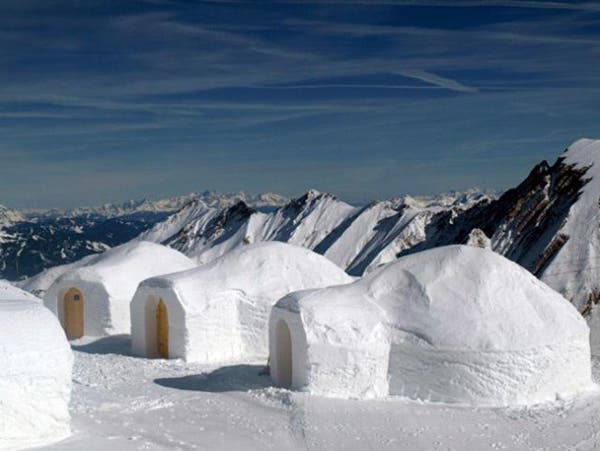 When thinking about my ongoing Tiny House History series (of which we are really making up based on a bit of criteria including lessons gained, sustainability of dwelling, actual realistic occupancy, etc) and then thinking about the month of December and the winter season in general I was almost miffed at where to take this post. I laughingly suggested to myself that I should delve into the world of igloos and think about their contributions to the tiny house world. However, after thinking about it in my own intellectual spectrum I reasoned that because they are little more than one open room comprised of seasonal snow and ice they wouldn’t really constitute a house or any sort of even semi-permanent structure. But for fun I dug in a little deeper. I was surprised and then captivated by the entire Intuit culture and Greenland in general. Let’s dig in, shall we?

It’s important to first get some definitions out of the way. First and foremost, what is an Inuit? Often confused with Eskimos or some small cartoon figure with a furry hood covering his/her face, a person of direct Inuit descent is of a group of culturally similar indigenous peoples inhabiting the Arctic regions of Greenland, Canada, and the United States. The Greenlandic Inuit specifically are the descendants of migrations from Canada and are citizens of Denmark, although not of the European Union. The Wikipedia entry is quite robust and can offer a lot more information on this people group.

What I found more fascinating as I continued to research is that the Inuits lived in and from their natural surroundings and in order to do so had to become versatile in their dwellings which – by necessity – had to be easy to construct and located close to good hunting and fishing. While we think of only Igloos the Inuit also had a more stable and permanent structure called a turf hut that they lived in for long stretches of time. They also had mobile tents made from animal hide to protect them from the direct cold and then, of course, the igloo, which is absolutely a temporary shelter (as I first believed) made of snow and ice.

Up until the mid-1950s there were still areas in Greenland where the Inuits lived in what Westerners would label as primitive. However, the structures were adequate and rather advanced in regards to passive temperature control.

While turf huts are still visible on the landscape the design and actual structures have almost completely been resigned to local museum faire. The turf hut – a low, square, stone structure supported by wooden beams of driftwood – was robust, sturdy, and well insulated. They could, in fact, be more or less, permanent structures. Turf huts were also located close to the sea so that Inuits could travel easily by kayak and canoe and so seal hunting was more accessible. The word ‘igloo’ is a mid-19th century Inuit word (iglu) which means ‘house’. And while an igloo is a bit of a primitive (read: sparse) house, it can provide shelter from temperature and conditions most closely thought of with hypothermia and death. The igloo is actually a one-room “tent” made of large blocks of snow that are cut out in different sizes with a special snow knife. The blocks are then placed on top of each other in a gradual spiral creating a bit of a dome shape. The key is that they are not made of packed snow that ultimately freezes. Igloos were found almost entirely in an area very north of Greenland where the sea was frozen through in winter.  After further investigation I would hardly say igloos have had much impact on the tiny house community and more to do with the survivalist set or prepper group.

Whatever the case we are again reminded that tiny houses have been around a lot longer than we want to give credit for. They have bounced in between cultures from continent to continent impacting the people and rewriting the architectural history books!

Other posts in the Tiny House History series:

Enjoyed this article. What came up for me is our right as human beings to create shelter for ourselves with whatever is handy. How far we have fallen… to have something as basic as that legislated into 30 year mortgages that feed the 1 percent.

I couldn’t have stated it better myself Rebecca. It is a tangled web we have weaved!

Excellent info Andrew! I never knew igloos were temporary, thinking wherever they were built temps remained far below freezing year round so they could too. Fascinating to see the sod huts, very similar to sod houses built on the western plains of US early on. In fact, the interior picture could be from the 1800s or 1900s if it weren’t for the stereo pictured on the right side and the white plastic bottle on the shelf to the left.

The Eskimo are the indigenous peoples who have traditionally inhabited the northern circumpolar region from eastern Siberia (Russia), across Alaska (United States), Canada, and Greenland.[1][2][3]

The two main peoples known as “Eskimo” are the Inuit of northern Alaska, Canada, and Greenland and the Yupik of Central Alaska and Siberia. The Yupik comprise speakers of four distinct Yupik languages: one used in the Russian Far East and the others among people of Western Alaska, Southcentral Alaska and along the Gulf of Alaska coast. A third group, the Aleut, is closely related.

While the term “Eskimo” is sometimes considered offensive,[4][5] it may not be, in its linguistic origins, a fundamentally offensive word.[6] Alternative terms for American Eskimos, such as Inuit-Yupik, have been proposed,[7] but none have come into widespread acceptance within the United States. In Canada and Greenland, the term “Eskimo” has fallen out of favor as pejorative and has been widely replaced by the term “Inuit”, “Alaska Natives”, or other terms. Alaska Natives refers to all indigenous peoples of Alaska, including indigenous peoples of the Pacific Northwest Coast and the Dene.

The Canadian Constitution Act of 1982, sections 25[8] and 35[9] recognized the Inuit as a distinctive group of aboriginal peoples in Canada. ***

The term “Dene” refers to Northern Navajo of which the Inuit are genetically linked.

Loved the article. Would have enjoyed a picture inside an igloo. Have friends who winter camp and have made them for shelter. They stated they were very comfortable during nights way below zero accompanied by strong winds. Sounds like what we consider good housing!

I remember my friend building his own igloo after we cross county skied into a national park. It worked very well. I a
slept in a tent and froze my butt off

Perfectly informative and a pleasure to read! Great article/story, but Andrew, you’ve been writing quite a while and your talent shows, every time. 😉
Rebecca, although I agree with you in your lament of civilization’s ‘decline’ into the 30 year mortgage, one must realize the freedom mankind had (even as little as 100 years ago) in building a home, wherever and whatever they wished, is outdated and impractical by now more because of the sheer increase in world population: it is simply nigh impossible for every man, woman and child to have a chunk of property and build anything they want on- or under – it, without some kind of rules and laws governing (oh, I hate that word, but it’s a necessary evil) the wheres and hows and whats of said population. 😉
A certain former Beatle opined, in song, about ‘Too Many People’ causing strife, hunger, grief, etc., and THAT was almost 50 years ago!
It IS a problem. But one the tiny house/small home movement is PERFECT for.
In time, everyone but the extremely wealthy will have to downsize, and they probably won’t have 35 acre parcels in Idaho to plunk it on – we’ll see people living cheek to cheek, in more ‘condo-ized’ communities, vertical living (large cities have already figured it out, building skyscraper housing, up, up, up and up…), group and multi-family co-housing, etc.
I firmly believe that anyone NOT already owning a good-sized parcel of land (anywhere, somewhere) in the North American continent before the next century will forever be unable to do so, by dint of a lack of availability AND exorbitant cost.
We already saw this happen, earlier in the 20th century, as our 75% ‘farming’ population dwindled by sell-off (to larger agriculture corporations) to the less than 10% it was by the beginning of the 21st… A person cannot, nowadays, go out and buy 200 acres for even 10 year’s average pay, let alone the grab-bag $1 per acre it once was.
A world of 1,000,000 (one million) people COULD go out and stake a claim on a few hundred acres, build a home – or homes – anyway they wanted, and not see a neighbor for miles (or even in a day’s journey).
A world of nearly 8 BILLION (that’s EIGHT THOUSAND TIMES more than the paltry 1 mil) simply cannot, we’ve already hit the tipping point of an unsustainable global population.
So I DO bemoan this, along with you, Rebecca. But things couldn’t ‘go back’ to the way they were even if we were told, tomorrow, to ‘go forth, take what you need, build where and what you want’.
Oh well. We can still dream (and do whatever we can NOW, in this and the next generation, to buy SOME acreage to call our own before it gets to be an impossible luxury).
And there’s always the ‘next’ frontier:
the Moon?
Mars?
At one time, the American frontier was just as ‘distant’ and ‘fantastical’ a notion, to the dreaming folk across the ocean… 😉

Sounds like you should be the one writing Jipsi. Excellent thoughts. I appreciate your kind words, your enthusiasm, and your problem-solving. I foresee a day when land will almost become a form of currency; a commodity, at best.

Andrew (and eeryone else), I am so sorry… I MUST apologuze with as brief an explanation as I’m able… I worked for a living as a web developer and writer, freelance illustrator for many, many years, until a car accident caused major spinal injuries, and I was dx’d with MS several years ago when the symptoms became too clear to pass off as something else (as Docs had done for so many years). The worst of the increasing (progressive) MS symptoms is incoherency. It’s why I cannot work in the fulltime capacity anymore. When I CAN get a few hours of low-pain, clear headedness, it’s in the middle of the night or late hours I’m catching up with things online. So readers here get me at my BEST, and worst. Which usually involves my long-windedness on a subject… I simply cannot STOP once I get going.
I APOLOGZE, to all. And hope no one hates me too much for it…it DOES embarass me, but I SO enjoy this site and the people here, and intelligent conversations I find here daily, that I cannpt refrain myself from being a part of it. 😉

It’s YOUR FAULT, Kent!
Yeah…
That’s my story and I’m sticking to it.
😉

I build an igloo this winter. Its remarkable how warm it can get inside them.