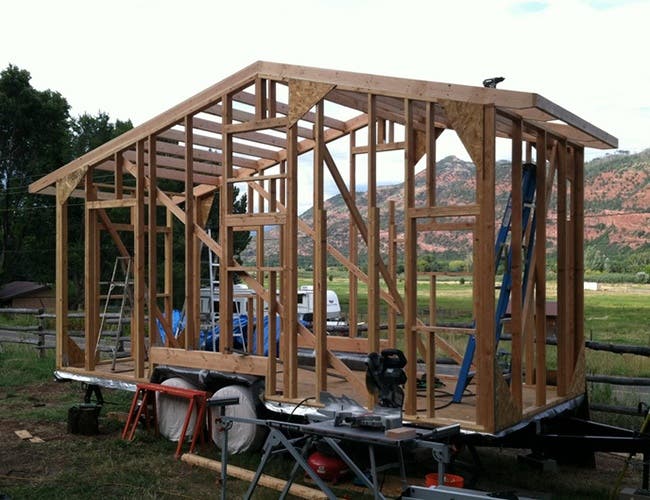 Each day brings new tiny house fans. Just when you think there is nothing left to talk about you realize that a new crop of “NOOBS” to the tiny house world, shows up. The same questions – or seemingly the same questions – get asked and discussion ensues. What type of heater should I have? How do I know which trailer to buy? Is there a siding that is better than the other? Do composting toilets stink? Recently though I have found myself reviewing the roof types of tiny houses try to challenge my design ideas on what makes a better mobile unit, which space gives more headroom, and which may work best for a treehouse.

There is a reason for every roof shape in a build. The roof is perhaps the most impactful part of the overall design. It is important to note then that there are six basic roof shapes including: Gable, Gambrel, Flat, Hipped, Mansard, and Shed (sometimes called a “French Roof”). It is worth saying that there are advantages and disadvantages to every roof shape. The final choice should be made according to what fits the appearance of the tiny house best. The following three are what I see most when touring tiny house builders spaces and festival events.

The gable roof design is what we have all drawn since childhood when envisioning a house with mommy and daddy. It is sometimes referred to as an ‘A-frame’ roof and is measured in pitch in regard to the two planes. To find the size you would multiply length (A) x width (B) to get the square footage for each plane, then add the two planes together to derive the total square footage of the roof. For example:

To further explain the gable roof, the pitch of said roof is its vertical rise divided by its horizontal span (or “run”), what is called “slope” in geometry, or the tangent function in trigonometry. The rise is typically first and the run second. In the USA, the run is denominated by the number 12, giving a ratio of how many inches of rise or fall there are to each 12 inches (one foot) of run.

The gambrel roof is known throughout the United States as a “barn roof”. It is usually symmetrical in design with two-sides – a slope – on each side. (Historically this style of roof was known as a “Dutch roof.”) The upper slope is positioned at a shallow angle, while the lower slope is steep. This design provides the advantages of a sloped roof while maximizing headroom inside the building’s upper level and shortening what would otherwise be a tall roof. The obvious disadvantage is that this style roof is harder to build (more angles) and typically weighs more. Shed roofs use single slope roofs. Depending on their height, they can be the perfect way to increase headroom in your tiny house. They are also (and arguably) the easiest roof to build as they have few angles. This type of roof only slopes down in one direction and involves one wall being built taller than the opposite one to create the pitch. It allows good drainage and while not the most aerodynamic from front to back, makes mounting on top of the roof (solar panels, TV antennas, etc) easy. Things To Consider When Renovating a Tiny Fixer Upper

Bringing a Tiny Human to Your Tiny Home: How to Prepare for a New Baby

Good article. Do you have a preference? I think I would lean towards the Shed style roof you commented on – it seems a lot easier for maintenance too. Thoughts?

I prefer shed roofs for tiny houses that are designed to sit idle more than travel. When traveling though I prefer to have just a standard gambrel as it cuts the wind better.

Three comments: 1) You referred to the shed roof as a “French” roof. I believe you meant for the Mansard to have this AKA. Mansards were invented in France when the government taxed houses by the story and by building a Mansard you had two stories (levels) which would be taxed as one since the roof covered the second level.
2) You described the gambrel as being a Dutch roof. Most sources that I have reviewed argue that the German’s invented this roof. The Dutch do have a roof named after them (the Dutch Hip) but maybe the same mistake made with the Pennsylvania “Dutch” is made here, in that Germans refer to the language they speak as “Deutsch” (sounds like Dutch).
3) Pitch and slope are two different ways of understanding the angle of a roof, though many people use the terms interchangeably. Pitch is the feet of rise to the feet of span. Pitch is identified as a faction. Slope is the feet of rise to one half the span (at least on a gable roof. One half a span is called a run. It is expressed as inches of rise per 12 inch of run. A gable roof that rises 6 inches for every foot of run has a pitch of 1/4 and slope of 6/12.

Is there a reason you could not do a shed roof with the rise going from the front to the back? Seems like that would be more aerodynamic,

This list is great! Would probably recommend this to my wife. We are really planning to make changes on our roof, because the roof we have purchased before was low in quality. I found a site that has great reviews in roof restoration, really thanks to roof restorations melbourne for a great service. You can review them also at http://www.roof-restore.com.au

Darn, you just picked the right topic on your blog. My mom is looking for tiny house roof DIY. Thank you for this one.

Hi, could you please let me know what kind of roof is shown in the 1st picture, at the top of the page? I didn’t see the mention of the name anywhere – might have missed it!?