How Did Stairs Get A Rung Up On Ladders 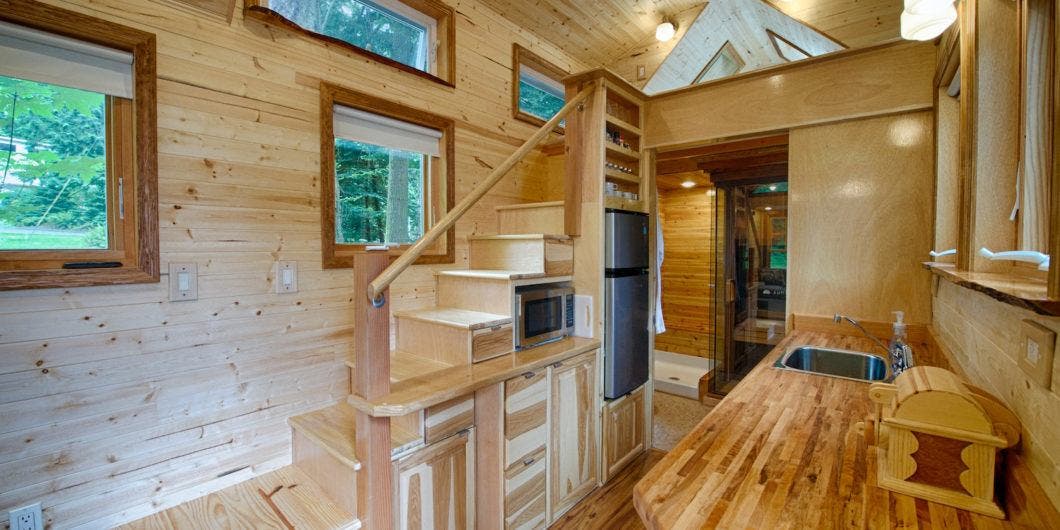 I spend a minimum of one day a week working as a mentor and consultant for a local high school as they build a tiny house based on the Elm 20 blueprint. There are two lofts: a sleeping loft and a storage loft. As they started to take shape the question arose among the students, how do we get up there? It’s a good question actually. How do you get up there? Do you build some sort of ladder? Do you try and find old boat stairs that are angled in design? What about something a bit more funky and more artsy? Are steps the answer? They seem simple enough. Let’s do an exercise.

I ask you to think back to the first tiny house photo you remember seeing. I’ll do the same:

Those same ladders have some unmistakable pros though, as well.

Somewhere along the line – 2011, I am thinking – DIYers and tiny housers in general, started realizing the limits to a ladder, most specifically, the lack of storage. In fact, at this same time storage was becoming a major concern and design inspiration. I point specifically to Logan Smith and Tammy Strobel who released photos of their tiny house on wheels showcasing some very cool ideas including under cabinet Ball jars for dry goods and cabinet toe kicks that hide storage drawers. Some builders (like Brevard Tiny House) even searched for storage in other areas. It was warranted though and without knowing it, seemed to usher in a new development in tiny houses. The ladder became less and less evident in homes and versions of stairs – yes, stairs! – began to find their way into THOWs. I attribute this to the Tumbleweed Houses redesign in 2015 wherein they announced new plans, some changes in classic plans, larger sleeping spaces, and more!

Among their new offerings were the Tumbleweed Stairs that allowed for a new way to access sleeping lofts, created more storage, and took up about the same floor space as previous ladders. It was the start of something very popular!

And with that, a new precedence was created. A ladder to the loft was so..so, “antiquated”. Stairs were the ultimate answer and for two very valid reasons:

Mind you, stairs are heavy, they take up more space in a lot of cases, and they are un-movable. But those are very small cons in a world where every square inch counts.

Today you are hard pressed to find a tiny house with just a ladder. They typically exist in micro houses or “A frame” roof tiny houses where there is not a lot of head room. But by in large, the stairs have replaced the ladder and created yet another way for tiny housers to express themselves artistically and domestically.

What about you? What does your tiny house have? What do you prefer? Let us know in the comment section below.

I saw the most amazing tiny house built by Ana White in Alaska with no loft and no stairs or ladder. It has an elevator bed that lowers down. It’s my favorite of all because I always have to pee in the middle of the night and the idea of climbing down a ladder or even a small set of stair is not for me

Thank you, Erika. I looked Ana White up online and found this video.

Love the stairs, I’m 70 and want the stairs. Can we see whole house? How much?

I love stairs and am planning them for my tiny under development. I am thinking of making each step twice as tall to reach the loft in half the space. On each step there would be a box for bills etc. that box would half the height of each step making the second step to easily get to the height wanted.

Though I am still quite agile, age usually creeps up on us,in ways me might not prefer, such as the development of less-flexible joints. Looking ahead to potentially less-nimble days, stairs will always be my preference for accessing the loft or upper story of any small dwelling. Even if they require more space, they do offer excellent storage options, which are frequently left-out of small building design considerations. However, the real, big reason I design structures with stairs in mind is the fact that I’m a huge animal lover. Dogs have always been dear members of my family, and for that reason I must consider their mobility capabilities, as well as my own. Dogs I’ve owned have never been able to climb ladders, (though I’ve seen photos of ladder-climbing canines). I wouldn’t want my own pet to risk injury or be denied access to any of a home’s living areas. And as dogs age, too, stairs are the only realistic option for allowing fur-babies safe access to a dwelling’s loft or upper story. My dog sleeps atop my own bed, and to keep the family together every night, I opt for stairs instead of ladders in the small homes I design. I’m sure many others share this design preference, for the same reasons.

The dogs. Dogs are the main reason I like stairs. They would have to go all the way up to the loft though. Maybe losing a little space up there would allow for that. That would be ok, we all sleep very close together anyway ^ ^
V

I always like keeping a hot young girlfriend under the floorboards of my kitchen just in case.
LOL

I do not own a tiny house yet, but when I do it definitely will have stairs. I’m in my 60s and really don’t appreciate climbing up a ladder to sleep or down one to go potty.

My question to you has nothing to do with this article. Why on earth do builders put shelving units in mobile tiny homes? It makes no sense. All that stuff will hit the floor one the house gets moving. Also, are there some sort of locks on the cabinets so everything doesn’t fall out? Those are my questions about tiny houses. Hope you can give me an answer. Thanks bunches.

By the way, that tiny house is beautiful, at least what we can see of it. Really need a view of the entire house please.

I’ve been living in my THOW now for 3 months. Being over 60, one of my top priorities for my build was steps. The steps had to have a 7 inch rise for my aging hips and those of my 9 yr old Westie.

The steps I ended up with have an 8 inch rise (anything higher would have pushed them out too far blocking my bathroom!). They are cantilevered at the back of the Tiny Home leading to a landing and the loft..like the narrow back stairs of old houses. They are lit up at night by a night light. from the bathroom. I have a short railing made out of black pipe to help me if I need it. My dog now goes up on his own to take his afternoon nap…easily jumps into the loft from the landing. The 8 inch rise has not been a problem .

Carol, I love your idea of stairs that go around up and behind…the bathroom i am assuming? There could be storage under each step as you walk up OR storage that opens in to the bathroom? Which direction does the bathroom vent out? btw I saved your pinterest pic! 😉

Very interesting! Ladders really do make shabby chic tiny houses give off an even more rustic atmosphere, but it’s definitely lacking in the ease of use department. Thanks for sharing!

Maybe it’s a city code type of thing for some people. I’m looking into building a backyard shed and it needs to be less than 200 sq ft and single-story to build without a permit. So I asked the city, what about a loft, does this add to the square footage for the purposes of not needing a permit? Does adding a loft disqualify the single-story requirement to build without a permit. The answer was that it boils down to whether or not the access to the loft is via a ladder or stairs. If I use a ladder to the loft then no city permit and no inspector. I would be free to build on my own. If I use stairs to the loft then I need a city permit, need to provide the city a submittal, need an approval, and need an inspection for my shed. So I think in some cases, maybe the stairs versus ladder might be a factor of making the construction experience as easy as possible.

I am thinking of making each step twice as tall to reach the loft in half the space. On each step there would be a box for bills etc. that box would half the height of each step making the second step to easily get to the height wanted.

This is a crazy idea but also a space saver. Those cabinets and appliances fit below the stairs. This is good for a small area. You are right that every tiny house has ladders to maximize the space.