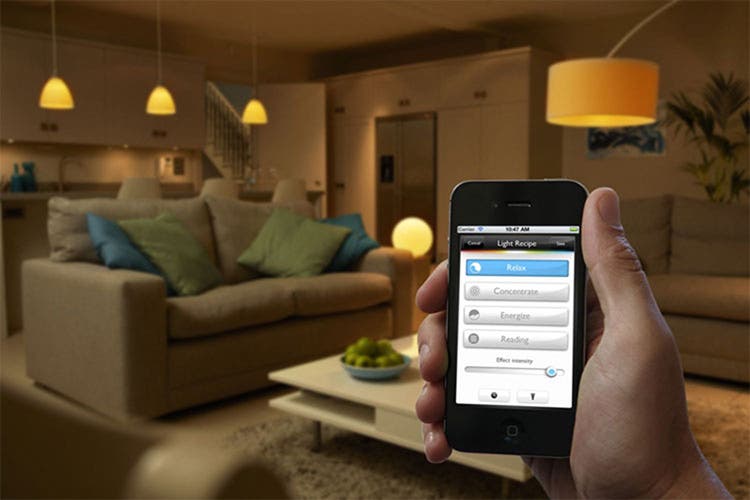 According to the Nielsen group’s most recent Digital Consumer Report 65% of all Americans owned a Smartphone in 2013. Now that it is 2015 it seems logical that that number has increased considerably. And we all know with that sort of technological insurgence Apps are poised to respond and/or control a multitude of areas in our lives. With HD and high resolution cameras, Internet browsers, file storage, and a host of other things, smart phones are uniquely incredible devices even straight out of the box. Add to them an arsenal of Apps and your device can now manage your tiny home. We live in an age where appliances are “smart”, computer chips are in most everything, and a virtual conversation is taking place between them all via Wi-Fi. Here are a few ways to harness all of that and use your smartphone to control your tiny house.

Made by Phillips, the Hue lighting system employs state-of-the-art LED lighting to bring color to your world. The bulbs themselves deliver clear and crisp light in all shades of white as well as every color in the spectrum. They’re practical too. They dim. They flash. They pulse. And most importantly they screw straight into your current light fittings. Naturally.

Face it. We’ve seen digital keypads on deadbolts for years. You haven’t needed a key to unlock your door since 2012 or so. In fact, a number of corporate work places and office buildings have employed the use of digital key fobs for two years or more. But now the leader in lock and key manufacturing, Kwikset, is offering a smart lock that uses Bluetooth technology to create an eKey (or encrypted electronic key).

The eKey replaces the physical key and allows you a more robust home access experience. In fact, with the Kevo App, you can take advantage of the convenience and security of complete key management by:

The coolest part is that the smart lock has not abandoned more traditional methods. With each deadbolt comes a digital keyfob as well as a physical key! Tired of coming home to a sweltering house that is void of programmable central heat and air? This probably covers most tiny homes which tend to use window AC units or split units. Wouldn’t you like to open a smartphone App and have your AC unit cool of your 240 sq.ft. to 71º twenty minutes before you arrive? Who wouldn’t? With the Aros – designed by Garthen Leslie who spent time at the Department of Energy helping to cut costs and conserve resources – you can now have a cool summer with an AC unit that learns from your budget, location, schedule, and usage to automatically maintain the perfect temperature and maximize savings for your home as well as being controlled from anywhere using the Wink app on your mobile. The iSmartAlarm™ is a DIY, self-monitored, self-controlled home security system. Controlled from an app that allows the user to utilize their iPhone or Android to rename devices, monitor their home, and arm/disarm their security system at any time, from anywhere, in real-time the iSmartAlarm is an expandable, smartphone-controlled, full-service alarm system. The App itself shows who is at home, when family members have left or returned, and the on/off status of each sensor. The App will also alert all designated members with a phone call, SMS message, push notifications or email when the iSmartAlarm security system detects a break-in or unauthorized activity.

Backed by box store Lowe’s, the Iris system is a robust one offering a number of enhancements to completely manage your home in a SmartPhone-meets-weekend-warrior sort of way.

Based on one of three kit systems each kits is built upon the Iris Hub, which taps your broadband connection via your router. The Safe & Secure Kit adds two door/window sensors, a motion sensor, and a wireless keypad. The Comfort & Control Kit supplies a plug-in lighting-control module and a programmable thermostat, but none of the security features. The Smart Kit contains all of the components from the other two kits, along with a range extender. All three systems are controllable from a PC, a smartphone, or a tablet. Since its introduction in Q4 2013 Iris has added everything from smart switches and smart plugs to water shut off and garage door openers; ALL controllable by smartphone! I like the idea is a wireless lockset. In my apartments, if I could change the ‘key’ by resetting a code, it would save a great amount of time in a rental turn.

I will watch that capability closely. I have not yet seen them in any home improvement store yet.

As a former information security professional ask about security when dealing with these networked devices.

I, too, would be very interested in the keyless system and how effective it is in the security of the household. If properly done, it could eliminate a whole host of headaches regarding keyed locks, to say nothing of cost effectiveness. I hope more information will be provided on this in the future.

A tiny house is usually the result of seeking a simpler life. Using a smartphone to control everything is not making things simpler… sorry. Security (i.e. someone hacking in), software and hardware updates, possible monthly fees, begin tethered to that stupid thing…. Um, no thanks!!

I want a robot that chops wood and carries water and waits silently out of sight when not needed. It could pretend to be somebody at home when you’re away and maybe feed the cat and change the litter box. Now THAT kind of tech would get me excited.

Ok Azimov, but how about a wood fired electronic generator that charges the robot so the whole system is self reliant 😉

Need solar charging body panels so on sunny days it could lie around on a lawn chair and charge itself. Maybe enjoy a nice drink of lubricant (with little paper umbrella).

As far as wireless light systems go, I explored the Hue system but was frustrated that it required a wireless router and a hub. And an expensive starter kit. Elgato actually makes bulbs that require no network, no hub, and run through bluetooth. I guess as I try to find options for being off grid most of the wireless smart systems seem to all require wireless networks and hubs. Hoping for more Bluetooth enabled or peer to peer (which I assume would be more secure).

[…] the greatest advantage of introducing smart technology into your tiny home is simply the convenience these technologies provide. With a smart home, you can remotely control […]