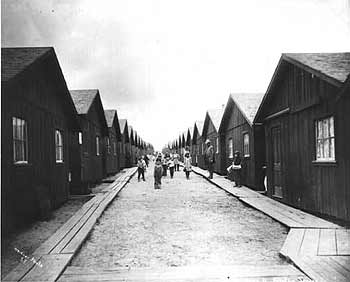 Update: I’ve added an interior picture to the bottom of the post.

Earthquake refugee cottages, or “shacks” were built by the Department of Lands and Buildings of the Relief Corporation to house refugees from the 1906 San Francisco earthquake and fire. Photo Credits and information from the Western Neighborhood Project.

Union carpenters built three main sizes of cottages between September 1906 and March 1907. Cottages had cedar-shingle roofs, fir floors and redwood walls. All were painted green to better blend into the parks and public squares in which they were erected.

When the camps began closing in August 1907, refugees hauled cottages to private lots, and often cobbled together two or more to form larger residences. Of the 5,343 moved from the camps only a handful are certified to still be standing.

Earthquake cottages came back in the public eye in the early 1980s, when “shack activist” Jane F. Cryan began lobbying for their preservation. Her efforts created City Landmark #171, a complex of four shacks at 1227 – 24th Avenue, and helped rescue two others that are on public display in the Presidio of San Francisco.

Learn more about the 1906 Earthquake Shacks from the Western Neighborhood Projects here. Restored Back of Shack March 19, 2006, celebrating the restoration of Shack One. Shacks on the Presidio Its amazing how clean the street is in picture #1

Reminds me of a remark I read in some book about the victorian era… a joke that ‘the city ought to pay the ladies for sweeping the streets’ with their long skirts.

Love to see tiny houses from the past. Interesting how similar in size, shape, and aesthetic it is to the tiny houses we’re building today. Some things must just work.

Compare to the FEMA trailers in New Orleans, which are apparently making their residents sick. It’s crazy how nice these are in comparison.

Hmmmm, what is the size of these shack’s? How did they cook?

The size of the shacks were 10 x 14 feet. I am trying to find some historic pictures of the insides of the shacks. No luck so far, if I find some I’ll post them to the blog.

Like Ben said, how could we go from those little cottages to FEMA trailers in 100 years? Doesn’t seem like progress…….

That said, I’m looking at those interior shots thinking, “you could put a little kitchen area here, small bath w/composting toilets and shower over there…”

Would guess that when people used these after the earthquake, they cooked outside. Maybe even a lot of community, shared cooking efforts amongst groups of cottages.

Looking closer, those windows look like forerunners to casement windows. They pivot from the center rather than swing out from the end, but similar concept.

One long side wall has several windows, the other none—for solar gain on the south, and protection from cold winds on the north?

has no one so far referred to Jane Cryan as a “shacktivist”?

There are 2 of these in Rio Nido (Guerneville) that were dragged up from SF by mule teams. Also photos of them bein moved at Guernevill Graphics onMain St.

This is interesting, post more often!
I never get enough info about earthquake shacks!

my gandfather george greenwell daws 1883-1947 was a carpenter and left liverpool england to new york on the ship etruria in 1906. i think he may have worked on these shacks.
does anybody have some old photo’s of them being built.

http://www.outsidelands.org/shack-list.php
there are typ A, B, and C, 1906 earthquake refugee shacks:

•”Type A” cottages are 10′ wide and 14′ deep.
•”Type B” cottages are 14′ wide and 18′ deep.
•Walls were made of wide California redwood boards, painted park-bench green.
•Flooring was made of fir.
•Roofing was pup-tent-like and shingled with cedar
•Most original windows were six-paned
•If you can see in the rafters, look for the checkerboard-like framing.

According to
http://www.outsidelands.org/shack-list.php
there are typ A, B, and C, 1906 earthquake refugee shacks:

•”Type A” cottages are 10′ wide and 14′ deep.
•”Type B” cottages are 14′ wide and 18′ deep.
•Walls were made of wide California redwood boards, painted park-bench green.
•Flooring was made of fir.
•Roofing was pup-tent-like and shingled with cedar
•Most original windows were six-paned
•If you can see in the rafters, look for the checkerboard-like framing.

Hi Kevin,
It would be good to hear from you personally by email as I am also interested in our grandfather.
Margaret ( George Albert Daws’ daughter).

Here’s a walking tour and info on some of SF shacks: https://www.legacysfhomes.com/bernals-earthquake-shacks/