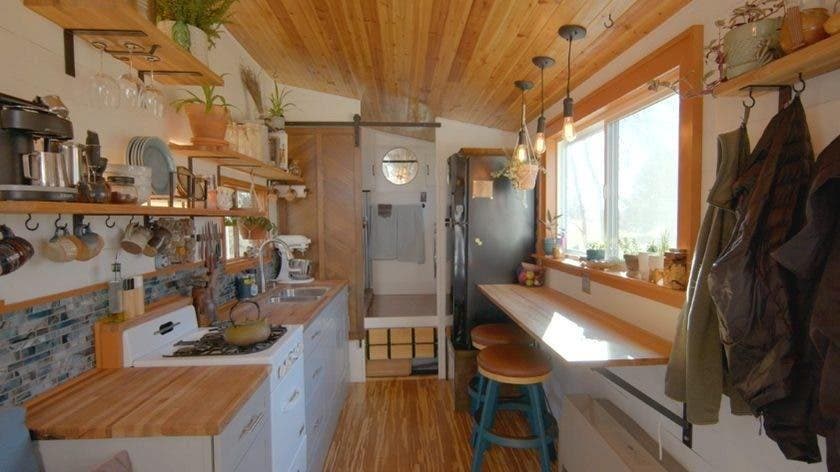 Graduate students, Sonja and Tim, built a $38k tiny home over the summer in just three short months. Impressively, they finished it just in time for the start of school. The final result is a cozy work of art that is incredibly efficient and entirely off-grid. For example, they installed nine 250W solar panels with a 6000w inverter and an expansive battery bank. They also made room for a 150-gallon water tank that can last a couple of weeks or more.

Their home is a 350-square-foot gooseneck tiny house As you’ll see in the tour below, interior craftsmanship is where Sonja and Tim’s DIY$38k tiny home really shines. It’s customized to maximize usable storage space, a comfortable bedroom, and functionality for everyday needs like cooking and studying. Impressively, their massive closet is conveniently organized and multifunctional. It doubles as a privacy wall between the main living space and the standing-height bedroom in the gooseneck section of their tiny house.

“The time that we had, we made it really beautiful with that time, so that’s also special in its own way. But if we were to do it again, it would have been nice to have some extra time to do more of those really tiny, super detail-oriented time-consuming things that we didn’t get to do in the house.

Towards the end, we did have to decide, like “yes, we did want to build this, but we only have the time to buy something that will work.”

With the time we had, we spent about a year and a half prior to starting our build collecting things for our build. So it honestly would have been nicer to have more time for that as well. But you do need space to store that stuff. I would say like 50% of the house is reused or found. It would have been nice to say a higher percent.

Family of 5 in Tiny House on Homestead

Couple’s 10′ Wide Tiny House on their own Land

Thank you, Sonja and Tim, for the detailed tour of your beautifully designed tiny home. Best wishes!