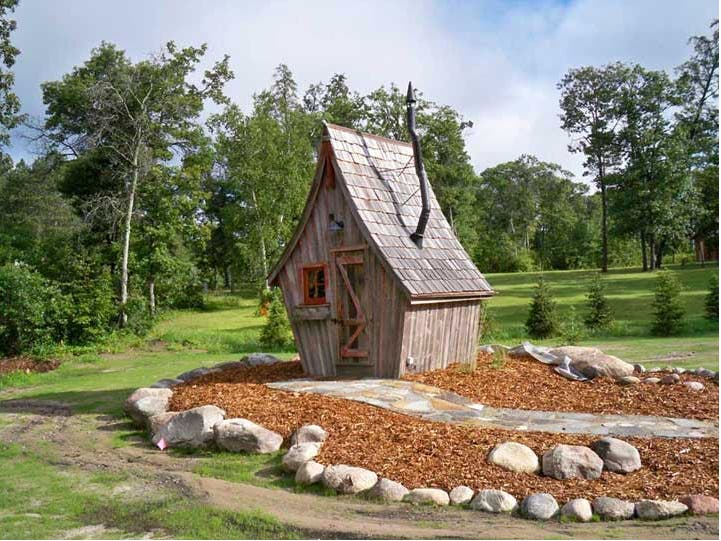 For those of you who have fallen in love with the Rustic Way cabin on the cover of Issue 15 of the Tiny House Magazine, owner Dan Pauly is collaborating with Marvin Dinovitz of Tahoe Tiny Houses and Trailers to bring the structures made from old barn wood to the West coast of the U.S.

Marvin owns Tahoe Tiny Houses and Trailers and has built a few of the Rustic Way designs for homeowners in the Tahoe area. Marvin plans on providing several configurations of the Rustic Way houses to be used as extra bathrooms, saunas, dressing rooms or bunk houses.

“Dan Pauly is an incredible craftsman who lives and breaths old barn wood,” Marvin said. “I’m excited to be working with him.” Marvin worked for years restoring both large and small boats and has his own company restoring Airstream trailers for use as small housing units. He said that many people have Airstream shells that have fallen into disrepair and don’t know what to do with them. Marvin said he asks vintage Airstream owners to hang onto the interior parts of a trailer because even those can be restored. His Airstream housing units can be used as guesthouses, art or yoga studios, small homes or backyard getaways. They are still mobile, but need to be connected to the house septic system if they have a bathroom. He incorporates green building techniques, LED lighting and solar panels.

Marvin also plans on restoring a few Airstreams with fun themes—his first is a Gene Autry/Roy Rogers/1950s cowboy theme with barn wood. He estimates a restored Airstream will cost around $25,000.

“I think tiny dwellings in the 300 square foot range are where people are going to head toward in the future,” Marvin said. “Once you downsize to the basics, you don’t need very much.”

Love the use of the old barn wood. Little guest houses and that bathroom!!! Very lovely. I would also love to get ahold of an old Airstream but they are as rare as hens teeth here in Victoria, BC and when you do find one, they are priced out of my bracket. 🙁 Keep up the great work Marvin and thanks for sharing.

If Dr. Seuss lived in a tiny house, this would be the one. I love the unique and quirky design.

Hi there – I’ve been reading the tinyhouseblog for a long time and dreaming of building one. I’m thinking of building one and selling it. (Right now I’m not able to move into one since I’m still working at my job.) Do you think there’s a chance of finding a buyer for a well built, well designed tiny house?

I think there is a market for those who want a small house but don’t have the skills to build one. I put myself in that category.

Those were really cute. Thanks for sharing this. : ) Namaste

Aha! There is one of those houses behind a large home on Lakeshore Dr. in Incline Village, a Lake Tahoe town in Nevada. I’ve been meaning to tell Christina about it. As anyone who has been there knows, Lakeshore Drive is an area of obscenely large homes, so it was neat to spot the crooked chimney and little building behind one of them.

I think the interior of the little house is really neat. It is like the Tardis, there seems to be more room inside that it looks like it would from the outside.

Looking to rent a tiny house for the remainder of the summer thru September. Only 1 person.