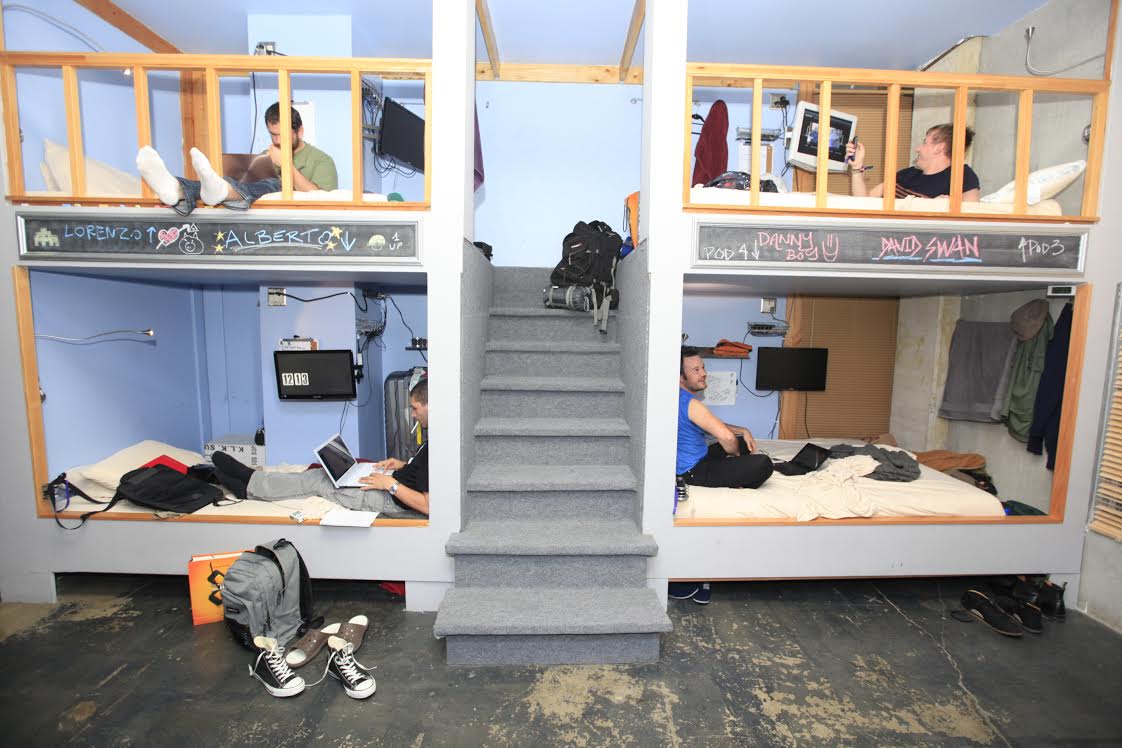 Airbnb has shown us there is an unending supply of unusual places you can stay, and PodShare in Southern California is one of them. I’ve slept in various “cube” hotels before including a Japanese capsule in Tokyo and a Yotel pod in London, but PodShare is melding together tiny spaces, affordability and community. Elvina Beck opened the PodShare co-living space three years ago and has since hosted over 4,000 “Podestrians”. She said the concept is perfect for minimalist, solo travelers who also want to meet new people. The design of the pods make them different from a typical hostel. “I grew up on MTV’s The Real World and thought: what would happen if you put 10 strangers under one roof with technology to keep them busy, but with no privacy to help them stay engaged?,” Elvina said. “PodShare was built to answer that question. I wanted to create a comfortable and safe environment for people to sleep without putting up walls.”

Instead of individual bunk beds like in a hostel, each pod is build like a separate shipping container divided by carpeted stairways. Each pod contains a memory foam mattress, a personal TV, electrical outlets, adjustable nightlight, and a closet with a locker. The pods were built to face each other and each Podestrian can personalize their pod with their name. Guests are provided with a towel, toothpaste, body wash, shampoo and WiFi. They also have access to the community kitchen, bathroom, shower, and the computer station. The pods do not close up at night, but the top pods do have safety rails.

“We actually created more privacy than a traditional bunk bed, without closing the face like a Japanese capsule,” Elvina said. “When I was laying out the floor plan for PodShare,  I considered building the pods in a circle, so to not box people out, but then opted for rows like displays,” Elvina said. “This layout gives people an opportunity to horizontally work on their laptops, put their backs against the wall, hang their feet over the balcony to face the person across from them, or sit on the steps.”

Eight single pods are available for $50 a night and two queen size pods are available for $70 a night. Elvina said she will explore long-term housing in an additional location and will plan for more drawer space in the pods. Her goal is to build a network of PodShare locations across the country to offer membership-based housing. Guests would pay a monthly rental fee to travel to different pods. House, bike and car sharing is now the norm and PodShare also promotes the sharing of common resources—with some personalization. Each Podestrian gets a lifetime pod number and a profile is opened for each guest.

“Since day one, we have created a profile for each guest—sharing a time capsule online helps us get to know the guest and helps the guest realize that they are more than a unique number,” Elvina added. “We believe in the sharing of space, stories, affordability… and curing the ever-growing world loneliness problem. I believe this type of minimalist social travel will inspire innovation and promote openness and discovery.” Photos and video courtesy of PodShare

Could you live in a 96-square-foot apartment?

have I missed something or am I just bit old?
with no hint of a barrier what is to stop a n other clambering uninvited into bed with me?..jes wondrin’

I think this is a great concept! I’m sure some things could be tweaked and made better or different, but all in all, I get it!! Unless you are a free spirit or hostel type traveler you might criticize the idea. If it’s not for you then that’s cool, but I think it’s a great way to travel on a budget, meet new people, and stay humble! Thanks!

I agree with the other comment, my first though was also that it looked like a prison (or a the sleeping quarters for a Navy ship). But that aside my second thought was did Elvina go through the usual zoning and code inspection stuff with the city to operate what is essentially a hotel? And finally the open social aspect is nice until someone starts snoring loudly through the night. All said I think it’s a great idea, it’s just not for me.

Other people’s nocturnal activity and noises would be a close second.

You definitely need a soundproof or remote area for snorers! This is nicer than some of the hostels I’ve stayed in, often just a bunk bed open on both sides and very basic amenities. Not even a night light. It might be nice to have curtains though, in case one person wants to stay up later than the one across from them so the light doesn’t annoy.

I thought it’s a great idea but I am 59 and think the age limit is offensive. Maybe not the right word. I would enjoy staying with people of all ages. And like the other posts, who monitors safety?

What’s the age limit? I don’t see that in the article.

No age limit, Lillian. You too can have your name up in chalk.

For anyone even slightly introvert this is what hell looks like.
Not even a curtain?

It is essentially a hostel with slightly more privacy or space per person. Those who wouldn’t consider a hostel would likely not consider these at all, and vice versa. Hostel culture is still pretty foreign here in America but is quite common in Europe. If I were traveling alone without my family, I would consider this over a fleabug hotel for the same price. Once you share bunkspace with strangers like I have on the Appalachian Trail while backpacking, its a bit easier to feel comfortable with.

This would be improved immensely with some sliding curtains. The whole idea of looking across the prison floor at a stranger is just too personal.

I find a lot of these comments curious. I have stayed in hostels all over Great Britain with a whole lot less privacy than these pod spaces. One night while backpacking through Scotland my teenaged daughter and I were put in separate rooms, she was with a nice Latvian family, I was with 4 very drunk Polish motorcyclists and an Australian woman. But you know what? It was totally fine. My single favorite place we stayed was a bunkhouse on the Isles of Lewis, it was much nicer than hotels we spent hundreds of dollars for.

This idea would be perfect for my small beach house when all my grandkids come. Right now we have traditional bunk beds. They work great but the room is so crammed. Something like this, while not as pretty, would definitely be more space efficient. Thanks for sharing!