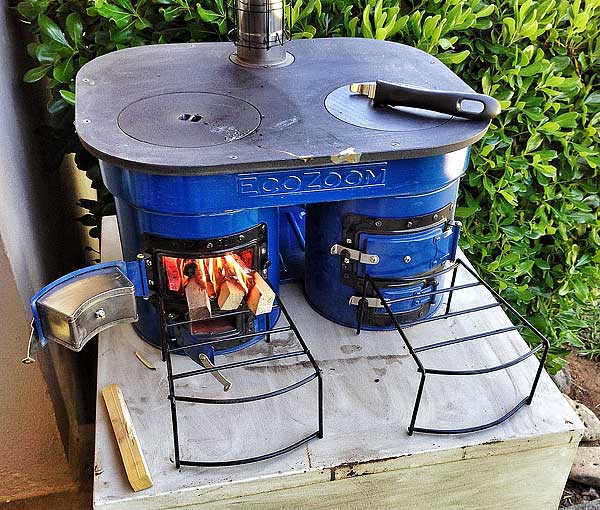 Tom Pritchard from EcoZoom located in Oregon contacted me a while back about their wood cooking stove called the EcoZoom Plancha. He thought the owners of tiny houses might be interested in the stove and asked me to review it.

The stove arrived via FedEX and I was anxious to check it out and give it a try. Weighing in around 80 pounds they recommend two people move it but one can do it if necessary as I soon discovered. You need to raise it to a working level and I located an old metal base to use as I was going to test it outside.

Once set up I prepared my materials. I had some small kindling, a newspaper and a couple of matches. By opening the door and placing the wood holder below the opening it was easy to start the fire, my wood started immediately and within a couple of minutes you could feel the heat coming through the top. I chose to just use one burner for my test.

I decided to fry an egg on the burner for my review test. It did not take long for the heat to build up and so I added a little butter and then cracked the egg and started to fry it. It did it fairly quickly yet I did not feel I was going to burn it as the heat was very even. It took about 8 minutes from the time I started the fire and when the egg was fried. Not bad in my opinion.

As you can see in the photo above I am not the best cook and I managed to spill a little egg on the cooktop. I think this would make a great small family cook stove with the two burners at your service.

I believe that the EcoZoom Plancha would work real well for someone with a tiny house. Especially for an outdoor kitchen and it may have possibilities for indoors too with precautions. Having the sticks burning sitting outside of the door inside a home would be a little nerve racking for some, but if it is well attended I think that it could work. You will have to be the judge. I used it outdoors and it worked really well.

You can also use charcoal to cook with the stove which would help reduce some of the fears of burning wood indoors since the charcoal is cooked with the top door closed and bottom door is used only for airflow, resulting in less risk of fire. I did not have charcoal available so have not tried that yet.

EcoZoom is offering the Plancha Cook Stove to Tiny House Blog readers at a discount of $50 off the list price. Use this at checkout time, and it is limited to one use per customer, the code is tinyhouse Click Here

They also produce several rocket stoves that may be of interest to you so check them out too.

Here is a little more information about the company.

EcoZoom is a for-profit, certified B Corp making clean cookstoves accessible and affordable in developing countries. Since starting in April of 2011, we’ve sold over 70,000 cookstoves into our 14 target countries.

Three billion people in the world rely on biomass and charcoal for their cooking needs, often burning it indoors on open fires or dangerous unimproved cookstoves. We believe that people of any economic status should have access to beautifully designed cooking products that will improve their health, income, and environment.

Make Space in Your Tiny Home for a Miniature Home

5 Ways to Turn Your Tiny House into a Hygge Haven

Embrace Your Inner Teen and Dump the Couch

Tiny Beautiful Balconies and How to Create Your Own

There is room for a junk drawer in a tiny house

Most of these stoves are identical to the one I bought from http://stovetecstore.net/ and that one supports humanitarian efforts. This larger stove is an interesting adaption I’m just curious about the history since they appear identical.

EcoZoom stoves are very similar to Stovetec stoves except for this Plancha model which is unique to EcoZoom. Also unique to EcoZoom is that we have a team on the ground in Nairobi, Kenya dedicated to helping those in need most by bringing our clean burning cook stoves to those that cook over an open fire or inefficient stove. Our stoves help reduce the impact on natural resources used for fuel as well as reducing the smoke emitted from stoves while cooking which has major health implications for families and cooks that primarily cook indoors.

Looks cool. But is the wood supposed to stick out like that with the door open? Wouldn’t think that would be a good idea inside a tiny home… but outside no problem…

Yes, that is the standard way otherwise the firewood is pretty small. Be sure and check out all their videos on their website.

Not a chance I’d use that inside a tiny wooden house but outside or in a well-prepared non-combustible hearth area inside maybe. Definitely wouldn’t leave it unattended. It’s amazing how far sparks can fly and how little it takes to start a fire where you don’t want one.

I wouldn’t recommend cooking with wood indoors because of the need to tend the fire. Alternatively, you can use charcoal to cook by top loading the burners, closing the top door, and using the bottom door for ventilation. The risk for fire decreases and need for tending reduce dramatically.

The site doesn’t specifically mention pellets but does say dried biomass. Would pellets work with closed door operation? We have a vrey strict no burn period during the dry summer months and there’s no way the stove could be used outdoors with an open door then. You aren’t even allowed to use tools that cause sparks. Charcoal or pellets would be a good solution.

If I am understanding your question correctly about pellets, I am assuming you are talking about very small wood pellets. Unfortunately those would not stay on top of the metal grate within the stove but you may be able to wrap them in something to place on top of the grate and then light. You would have to keep the bottom door completely open at all times. I can’t say it is a perfect solution but it could work.

You could make a tray or small box out of perforated
metal to hold wood pellets, you could also use Chain mail across the front of the opening of the stove to prevent sparks and debris from leaving. It’s all about innovation.

Is there supposed to be a 2nd photo in this article? Right after the sentence ” I think this would make a great small family cook stove with the two burners at your service.” There’s a giant black square. I tried switching between mobile theme and regular (I’m on a desktop, but for whatever reason your blog defaulted to mobile view), and still no change.

Looking at the source code (sorry, should have done that before leaving the first comment), I can see there’s supposed to be an embedded YouTube video through an iFrame. Something went wrong, apparently.

And now it’s there (the video). OK, nevermind. Maybe YouTube was glitchy…

I tried the links to their website, but was “forbidden”. (I tried this through a library’s internet connection with no filtering). Anybody else have problems accessing their site?

I think we are sending to much traffic and their server is having trouble. Please keep trying!

I’m very curious to find out more about this stove.

They are working to get it back up, keep checking!

I’ve used both Stovetec single stoves (identical to the 2 underneath the “plancha”, and many other homebuilt rocket stoves, both at home and in Haiti. The advantage of the rocket stoves in using less fuel has ramifications – the fuel can be very small (fallen twigs etc.) and it can be dry corncobs, paper spills, etc. also. The complete combustion means much less smoke and more efficiency but it does mean it cooks really fast so it has to be constantly tended (pushing the small wood in a little at a time) albeit for a shorter time.
I didn’t find sparks to be much of a problem, but cramped spaces (I’ve lived on boats comparable in size to Tiny houses) make dealing with heaters and stoves very difficult.
A common complaint in Haiti is that 2 stoves are needed to make 2 dishes, one pot meals not being culturally accepted. So this design would help – but loses portability. I think it would be very helpful to promote “haybox” insulated slow-cooking at the same time as rocket stoves – a fuel-less way to offset some of the disadvantages of the technology.

Nice little cooker. They don’t take as much wood as you used though. The cost of these is fairly high, but they should outlast everything you own as a fair trade off to the cost.
I think i’ll be making my own eggs….

I find it really ugly. The top is great until it turns into what looks like metal 5 gallon metal cans.

Does the manufacturer recommend this be used like a rocket stove? I also wouldn’t use it like that indiors. Smoke is escaping from the open firepit door and your sticks are burning back! Shouldn’t there be a stone lining in the firepit if used inside?

I would recommend that this manufacturer look at the Shipmates for size… At the Amish sheetmetal stoves for design, and some if the tiny wood stoves on ebay (especially from England) for aesthetics. Why two firepits? Look at the wasted space in the middle that could be an oven.

It doesn’t really look like it would hold up to any really serious use. The bottom of the stove looks like it’s made from sheet metal and the fire box is tiny. Looks like you’re cooking in two large coffee cans. And , what exactly, besides burning wood ,makes it “healthy”and “environmentally friendly”.? If you want to review a serious well built wood stove, both for cooking and heat, that is the perfect size for these super small homes, review the cast iron stoves made by Marinestoves.com

Google Marinestoves.com and you will get a number of hits for their website. Some of the finest high quality small wood stoves and cookers made. I’m not connected to this company in any way. I was just looking for something for my Airstream travel trailer. They don’t use the word ” ecological” in their literature either. A highly over used word in my opinion. Much like “healthy”,”natural”, “green”ect ect ect.

Leave off the s, it should be marinestove

[…] This small (and very efficient) wood stove would have lots of practical applications.  […]