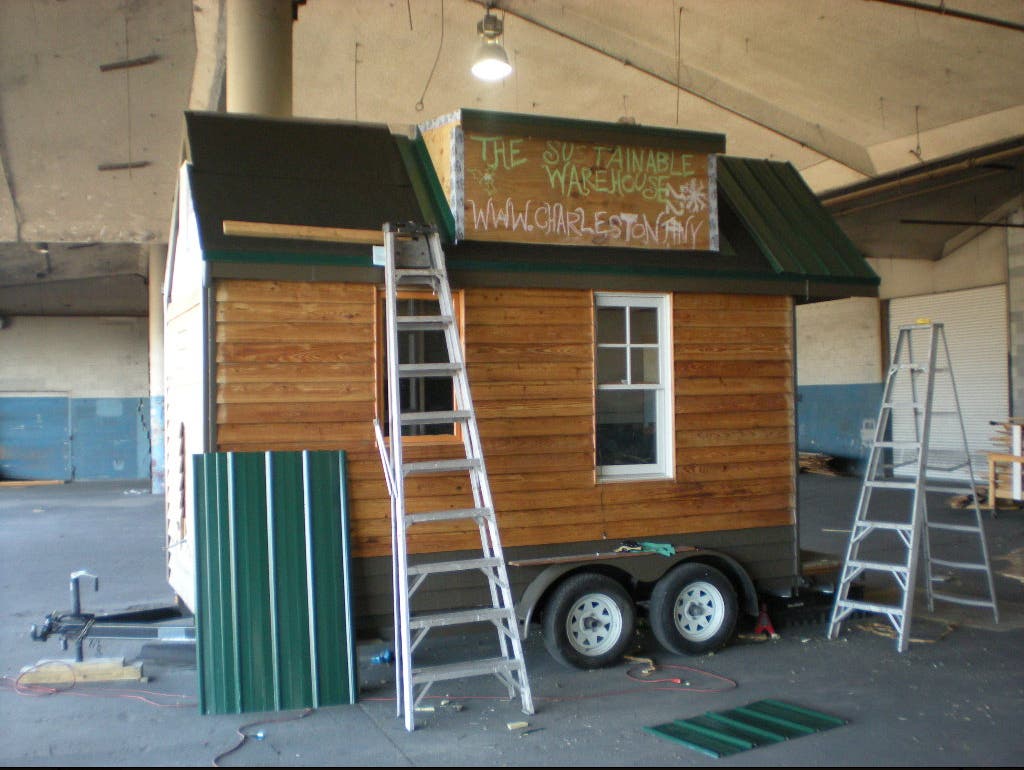 Andrea Tremols and Cedric Baele of Charleston, S.C. spent a year researching tiny homes at their local library and on the web before they decided to actually build one. Then they tore it down and started over. The couple is attempting to build the house out of 90 percent reclaimed lumber and materials while still utilizing every bit of space they can in order to obtain their ultimate goal of more conscientious living on the Earth. After graduating from college, the couple lived communally as organic farm volunteers in Europe. As a child in his native Belgium, Cedric lived on a 38 foot steel sailboat, and after school he lived in a re-built 27 foot sailboat in Charleston Harbor. So the 200 square foot home they are building will not be a far stretch. The couple (Cedric is a seasonal bicycle tour guide and Andrea is a Spanish teacher) also knew that they did not want to go into 30 years of debt for a home during an uncertain economy.

“People my age, people I talk to that don’t want to be indebted, people that are coming out of college in an economically unstable time…many are interested,” Tremols said to her local television station.

When complete, the home will have a kitchen with a stove, a small refrigerator and a sink with an on demand water heater. There will be a bathroom, a composting toilet, shower, a living space and an enclosed loft. The couple based their design on a photo they saw of a Protohaus, and most of the materials for the house came from the Sustainable Warehouse in Charleston. The house design utilizes cross ventilation without air conditioning and will eventually be hooked up to solar power. When the summer heat and hurricanes converge on Charleston, Andrea and Cedric plan to move their tiny home into the mountains. The Protohaus design that inspired Andrea and Cedric

<3! Saw the article, and on their personal website they said they rode the nearly complete home in the Charleston Christmas parade. I would have loved to have seen that!

Really beautiful people and house. Inspiring that young people are doing this.

I think having more house than one can afford does not make any sense.

The idea of “more home than you can afford” has become a bit of a misnomer. Understanding what you need is a better idea that almost nobody (besides present company) looks at. This couple has become inspired and is building what they determine they need. I applaud them, this is thinking that should be embraced, but our society doesnt work that way. My ex and i started in a mall 3 bedroom home, almost a cottage really… We could easily afford it. Then we bought a condo, a little bigger 3 bedroom… Still just us and 2 cats… Still easy to afford, plus we made a profit on the house. We sold the condo and bought a bigger 3 bedroom, we’d bought a small dog, so we needed more space! We then finished the bament, almost doubling our overall footage.. Before we split, we had a 3 bedroom, 3 bath, 2 kitchen, 2 living room plus a large rec-room monster.

After the divorce i took a hard look at myself (and my growing interest in the small home movement) and decided i needed small, but still went for a 2 bedroom, for me and 2 cats… I almost went 3. She bought a 4 level townhouse. For her and the dog. I tried really hard to declutter and live smaller… I dont make much (i work retail) but i can afford this place on my own and still have fun ( on a 20 year mortgage.). She makes triple what i make and is sinking in debt with a 35 year mortgage she can barely afford.

We are mostly wired to want more. And we are told when we are buying to buy big, cause that will make it sell easier when we want to trade up. It takes a strong effort to push back, and i hope the sort of thinking couples like this do becomes the norm.

I love the way the lower deck makes the kitchen and the living-room/reading area fit into one single spacious room. I would worry more about the ladder, though: I understand it is the kind of ladder that hooks to the handlebar (you don’t want to drop it when you’re up there alone in the house!)

It’s easy to climb, but going down is tricky: I have a house with a loft that is used for storage. When I use a simple ladder that leans to the wall, and is just tall enough to reach the loft, I am quite unable to put my foot on the first step (too close to the wall), unless I bend my knee forward (which is impossible), so I have to maneuver with some difficulty. Now I use a step ladder, which is either higher than the loft floor, or has a platform. The latter is set slightly away from the edge so I would not need to bend my knee in impossible directions.

This is based on my personal experience, not fear. Just curious to know what is your story about routinely going up and down this ladder.

Wondering how much recycled materials are generally max. percentage for a tiny house – 90% sounds good.

And, so wise of this couple to not get into heavy debt in these uncertain times.

Before we split, we had a 3 bedroom, 3 bath, 2 kitchen, 2 living room plus a large rec-room monster. so I have to maneuver with some difficulty.

love the solution to the loft – brilliant! Their layout is well thought through – love it!

My husband & I want to start building our tiny home on wheels. We live SC. Are there any rules or regulations we need to know about? Thank u

My husband and I live in Charleston! We also want to build a very similar type tiny house on wheels. Is there a way we can get in touch and maybe view your progress on the house? Thank you! It looks awesome btw!

sorry this reply is super late! I had no idea this article was written about us. The writer didn’t contact us, they just took information they gleaned from other sites so I just found this! We don’t live in SC anymore but the state does not allow you to live full time in any dwelling less than 400 sq. feet legally. We did it in Charleston for a year and got away with it but then we moved north. I wish I would have seen this post earlier so you could have come by for a visit! Our friend Zach is building one right now on John’s Island so if you want to check it out contact him via http://www.charlestontinyhouse.com!

[…] of the decision-making process lies in the opportunity to live debt-free. Charleston provides ample room for tiny home dwellers to hitch up and rent land, as well as opportunities to buy a small patch of land. For those who […]