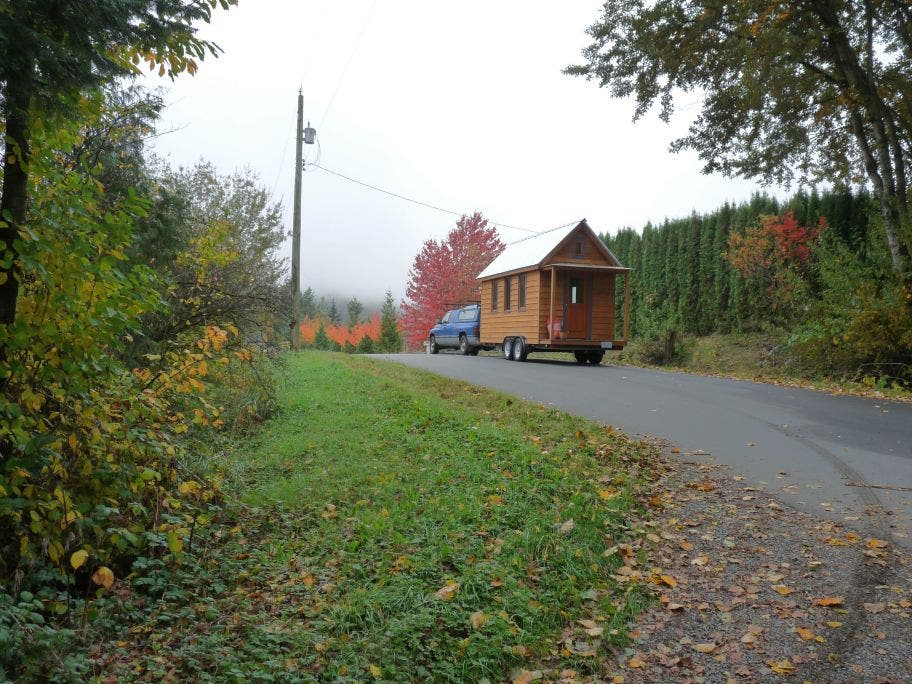 A little over a year ago I covered Will Pedersen’s build of his Tumbleweed Tarleton you can view the post here and check out all the photos of his build at the Tiny House Journal.

In October, Will drove from Abbotsford, British Columbia to McKees Mills, New Brunswick. Will drove a used 1999 Dodge diesel truck and it worked out great to tow the house.

Will and Alyson created a small blog called Alyson and Will’s Adventure to cover their move and life at their new farm home and you can view it here. After so many months and so much planning, I drove away with the tiny house and most of our possessions in tow. Left just around lunchtime with everyone on the farm hugging me and saying goodbye. I’ve got my Ipod loaded with songs and we’ll see how far I get today. — Will

Will weighed the house before moving it, it came in at 6182 lbs. empty (well below the trailer’s 10,000 lb capacity). The tongue weight is around 1,100 lbs which is more than the max of 900 lbs recommended in the truck owners manual. He was carrying all his and Alyson’s meagre possessions also and loaded the heavy items in the back of the house to lessen the tongue weight.

Most of the trip, Will slept at truck stops or campgrounds, just stopped and had a snooze when he got tired of driving. Lunch stop in Golden, BC

I covered about 700 km over the Rockies from Kamloops, BC to Strathmore, Alberta. Kind of slow going over the mountains. It will be flat for a long stretch now. Not too much interesting about driving for hours and hours looking for good coffee and for a place to eat that is not too bad. — Will Made it to Manitoba It was nice to start seeing wooded areas in Manitoba after the plains. The northwest part of Ontario was really beautiful with a different lake after every little hill I would go over. Until next time, thanks for reading. — Will Pulling in the drive-way at our new farm in McKees Mills, New Brunswick.

Will arrived on the farm just before noon today. I am so happy to see him and he is so happy to have arrived! The truck did really well, the house held together and Will survived the days of driving. I think he is feeling a great sense of accomplishment for having made the big trip and I’m so proud of him, too! — Alyson Got the truck stuck when moving the house so had to use the tractor to move it. The house after a recent snowfall

It is so great to see a tumbleweed house in New Brunswick. I hail from St. Andrews and will be building one myself in the upcoming year. Great story!

do you know where I can purchase a tiny house like yours as a guest cottage,,,,I live in nova scotia.

No, I’m afraid that I don’t know. I’ve considered building another one as a winter project but am too busy right now. If you can build it yourself it cuts down a lot on the cost. Good luck!

I just spent a large part of the day reading the great blog of Will and Alyson’s adventures. I love reading about these journeys and it is nice to know about the organic/solar etc. movement in NB. I could not find though what prompted the move to NB from BC (I’m in AB planning to move to PEI at some point) and what the tiny house will be used for now. It seems they have a nice house on the farm to live in. Just curious and wondered if they ever lived in the house before the move. Maybe I missed a previous story. Nicely done for sure.

I did live in the house for 7 months before moving it to NB. I love the design but it would be a bit small for two in my opinion. Alyson had a 300 sf one room house that didn’t work for both of us. Since I did not own the land, a moveable house made a lot of sense. Our main reasons for the move: land is much cheaper in NB, we wanted to have our own place instead of living on the co-operatively owned farm in BC and Alyson’s parents live in NB too. We’re now using the tiny house as a guest cottage and will likely have a farm worker or business partner living there in the future. Our new house is a relatively spacious 980 sf. Thanks for reading!

Thanks kindly Will for answering my questions. I think the guest cottage idea is a really good one for the tiny house.

I had a chuckle about you scouting out “good coffee” places because I surely know what you mean about the Tim’s. It is big down east. We like Kickinghorse here in the west but now are roasting our own. I hope the farming works out very well for you both.

Thanks for the reply.How does the water/plumbing system work(for a backyard guest house)
Isn’t New Brunswick gorgeous?

It is gorgeous (and peaceful) here! The plumbing on the house just has a supply pipe below the trailer that has a regular garden hose connector. I’ll need to dig a trench for the water line and run it from the main house and likely use a heater cable on the last section and/or cover and insulate around the trailer base for winter use. It also has a drain pipe coming out that drains the sink and shower. In BC, I just had a simple greywater system with a perforated pipe surrounded by gravel and buried. In BC I had an outhouse but a composting toilet or flush toilet connected to a septic system are other options. I would plumb this separately from the sink/shower drain.

am longing for a tiny house as a summer home for PEI or NS – live in the US and am curious as to how they are received in Canada, especially the areas I mentioned. Any legal problems?

Hi Will, looking for some info on how you registered the trailer in BC. I am building on Bowen Island, on a trailer used by the film industry in Vancouver. It has never been registered before.

What category registration did you get?