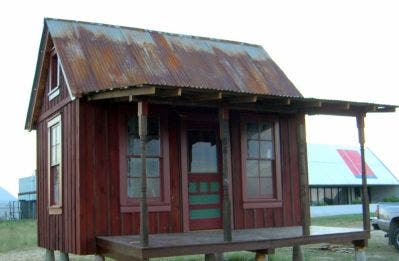 Luling — To Brad Kittel‘s way of thinking, everything should be tinier in Texas.Well, maybe some things.

Kittel builds and sells a line of undersized houses that can serve as anything from a backyard hideaway to an intimate bed-and-breakfast cottage to an artist’s loft and workshop. His tiny houses are made from salvaged lumber and building materials, and even though the smallest ones are generally about 200 square feet, they come wired for electricity and outfitted for plumbing, including a shower and toilet and a loft for sleeping.

“One person could live comfortably here, maybe even two people,” the 52-year-old Kittel said while standing inside a modestly furnished model on his manufacturing site where Interstate 10 and Texas 80 meet south of Luling.

“It wouldn’t do for a family with kids, but these things are roomier than they might look.”

Kittel spun off his Tiny Texas Houses business from the more established Discovery Architectural Antiques that he and his wife, Suzanne, operate in nearby Gonzalez. He began working on his first model in April and began selling them in July.

Some look like barns, with the vintage fading red paint; some resemble 19th-century chapels and some are done in Victorian style.

No two are exactly alike, Kittel said, because the raw materials come from demolition projects from such disparate locations as Kansas City, New Braunfels and Buffalo, N.Y.And none of them is cheap, he added. Prices range from about $30,000 to near $60,000. They are built at the Luling facility and transported by truck and trailer to the customer.

“Salvage lumber is way more expensive than new,” he said, extolling the virtues of old-growth timber and the process used to preserve exterior wood when Texas and other Western states were being settled. “It’s labor-intensive to make ready for reuse, but these houses could last for another 100 years.”

Tara Weaver, an Austin-area artist who purchased one of Kittel’s first little houses, said she was attracted by their aesthetic charm and their functionality.

“I love it,” said Weaver, a painter, who nestled her split-level ranch-style house with a rusted corrugated metal roof near a wooded creek on her 20 acres southwest of Austin. “It gives me a nice view of the land while I do my painting. And because it’s made from recycled material, it looks like it’s been here forever.”

Kittel said the vintage look is something he and his crew of about six strive to attain. The assembly area just a few hundred yards from the San Marcos River looks something like a museum for discarded building material. Doors and windows that date back to the 1880s, many containing original glass and hardware, are stacked inside a warehouse.

Old nails have been pulled from weathered framing lumber waiting to be resized to make the wall studs for one of the three tiny houses under construction or on order. Kittel appears particularly proud of a collection of aging 40-foot timbers reclaimed from a demolished warehouse in Kansas City.”We’re pretty much seeing the last of lumber like this,” he said. “The old-growth forests are pretty much all gone, and trees never get this tall in what we’re replacing them with.”

Kittel said that his model homes attract considerable attention from motorists on I-10, and he’s hoping to capitalize on the visibility. Visit Tiny Texas Houses. Thanks for posting. I hadn’t heard of Brad Kittel’s endeavor yet, and wrote a follow-up to a piece I posted just yesterday on other tiny-house craftscompanies. Love your blog; keep it up!

OMG! I’ve always wanted something just big enough for just me..(and a dog)!!.. right here in the woods of northern Wisconsin.
Wish I could see some of them in person..

[…] Kittel is a Texas homebuilder who advocates small building and big recycling. No two of Kittel’s houses are alike because he uses salvaged lumber and building materials from demolitions. Inside even the […]

They are so adorable!! It would be like having an adult version of Barbies dream house. I really want one!!!

Very interested in learning much more about these Tiny homes. Great ideas for a quaint retirement home with low maintance. Easy , carefree living.