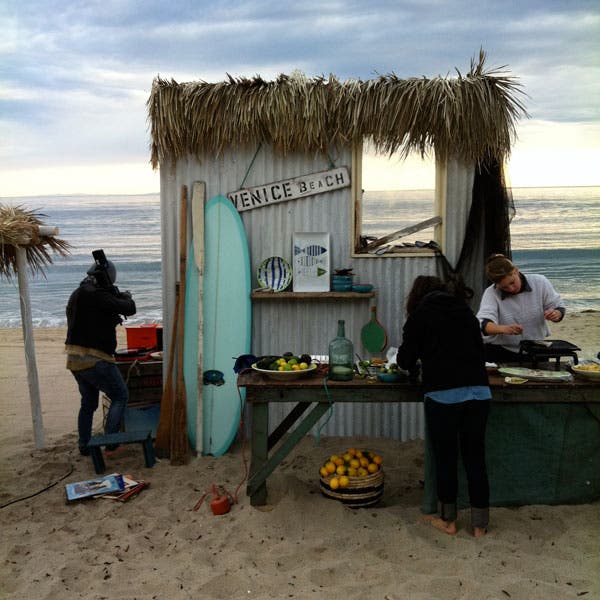 As the ultimate place to hang out during an Endless Summer, surf shacks reflect the easy, breezy lifestyle of people who live near the beach. They are usually hand-constructed shelters used by surfers, but some have become part of the vernacular environment or even historical landmarks. Also known as beach shacks, beach huts or surf huts, surf shacks are found on beaches all over the world. Most surf shacks are basic structures used to store surfboards and gear, change clothes or just get out of the sun and drink a cold beer. Many surf shacks have also been used to build and finish surf boards. The Hobie Surfboards company rented a dilapidated shack in the 1950s to design what would become the modern polyurethane foam surfboard. A surf shack and cafe in Venice Beach, California

Many surf shacks have been converted into surf and rental shops, bars and restaurants and even small homes. On Windansea beach in La Jolla, a surf shack built in 1946 was actually designated as a historical landmark by the San Diego Historical Resources Board in 1998. Over the course of several years, it’s been beat up by the ocean waves—and rebuilt each time by locals. These are so beautiful in their simplicity! And, as someone who lives in Michigan, they look so warm. 🙂

It’s stopping to notice little things like surf shacks – in all their smallness and simpleness – that makes like worth embracing!

Stop and smell the roses….or look at the simpleness by a beach. Beautiful!

Tiny houses for beach bums! You can’t get much further off the grid than the edge of the continent! One of these on a remote stretch of beach, great sunsets, fresh seafood and a cool drink, we’re set. It’s five o’clock somewhere…

Love it! One of the best surf shacks ever- Ben Knox’s driftwood hut on the beach in the movie “Local Hero”.