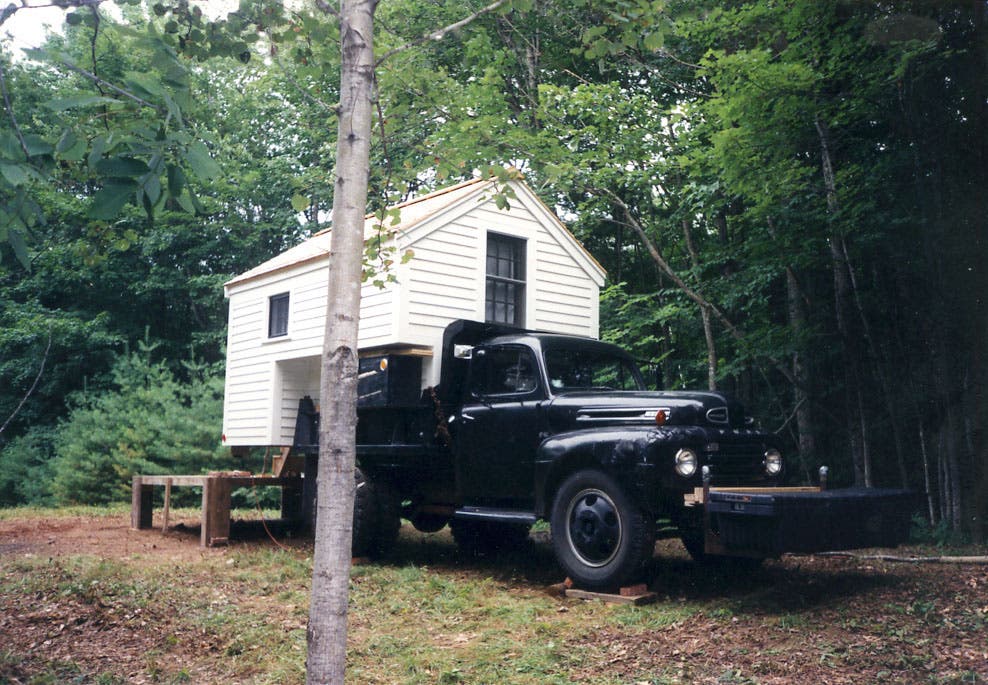 About 15 years ago, Robert P. O’Neil of Concord, Massachusetts spent a month building this “truck house” for himself and his longtime partner, Susan to live in while they built their half-cape house. He built this tiny abode to originally fit his 1949 Ford F6 dump truck, but it is now mounted on a flatbed trailer which is towed by his Ford F350. The house is 8 feet by 12 feet, weighs 3,600 pounds, and has cathedral ceilings to fit Robert’s 6 foot 6 inch frame. It has a bead-board ceiling, true divided light windows, a cedar shingle roof, oak threshold, pine floors, queen sized bed up on a platform, and a closet. The house has what Robert calls a “non-integrated” kitchen: a small refrigerator, a wood shelf and a hot plate. Because the kitchen is not built into the house Robert said it has the opportunity to move and change. When traveling or living in the truck house Robert and Susan utilized alternative and environmental solutions for personal care, toilet, and solar shower, brought in power and phone from their tree-mounted service lines. In winter, the local health club happily accommodated them by charging $1.00 a shower.

“It’s the most magical and cozy retreat,” Susan said. She added that it also makes a great meditation house.

Robert said that he appreciates the excellent craftsmanship of boat design and likes to have a place for everything and everything in its place. He gave the tiny truck house a nautical theme with white paint, white bead-board, dark blue bedding and a clean “Cape Cod” style.

As a carpenter, Robert has also taken the truck house out to job sites while he works. He mentions to clients that his little house is better built than most large homes. He adds that the little truck house is a combination of Henry David Thoreau and Martha Stewart: minimal and tasteful.

Robert is happy to take orders to build a custom truck house, or any small house for tiny house lovers. He is willing to sell this truck house to a potential buyer. If you are interested, please contact Robert or Susan at follyfolio (at) gmail.com. Photos courtesy of Susan and Robert O’Neil. No reproduction without permission.

I really like this idea, I have been building small structures for awhile now, mostly in the line of park model type units but I have thought for some time about building a tiny house that would work like a slide-in truck camper, this is the first unit in that area that I have seen and I really like what you have done. I would love to know more about how you did your floor structure and framing. Great build!

Excellent work! Really enjoyed this article. Thanks for sharing these ideas.

This is awesome. It’s interesting how the kitchen window opens to the inside and I love the screened in door too.

i’ve been following this blog for a couple years, and i have to say that this is just about the neatest thing i’ve seen on here. i love it.

Looks like you have a lot of rear overhang. Do you have problems with steering and/or braking?

Cool little house and he did some very creative things on the inside, but … but … I’m lusting over that ’49 Ford truck! 🙂 Sweet!

The ’49 is precious: rounded curves, never restored original condition, a working dump truck until 10 years ago, and still has life left in her and another truck house to come,

The ride from Massachusetts to the New Hampshire site with the truck house on board was an exercise in balance. Perfect marriage between the truck and the house built in, even made it under power lines, didn’t flip any wheelies on inclines either. Yippee!

The ’49 has been my friend since the early seventies (last century).

Love it- very simple, yet attractive/functional…

Kent- any idea on how I can contact this guy to film him? Thanks…

SORRY- Saw the info after I posted….

Hi Deek. Yes, you can contact Susan or Robert at their home number or by email…in fact…I told them about you since you live in the Boston area.

How wonderful bringing back the mobile housing ideas of the 60’s. But I bet British caravaners and American Hippies would have envyed this.

I was lucky enough to stay in this little house for a weekend. It was cozy and peaceful – the perfect place for a Pisces girl to daydream during the day and dream at night.

Perfect height for any small house!

Hmmm… A lot of different things could be placed under a bed of that height:

– Try a twin futon for a child. Makes a great play area.

It was great to see this one!

What are the basic dimensions ie: Height width and length? Are there any drawings one could get? Just asking.

I now own this sweet tiny house, bought it from Bob and will use it as my newly purchased home needs much restoration…this actually adds value to my property in Georgetown Maine….and I might rent it out this summer as I am a stones throw to Reid state park.
I love my classic tiny house!

I want to build a “Vardo” with this kind of pitched roof instead of a round top.
Thanks in advance
Mike

I want to build a “Vardo” with this kind of pitched roof instead of a round top.
Thanks in advance
Mike

Congratulations Marion. I know you will enjoy this tiny house as much as Bob and I.
If you know anyone interested in a custom built tiny house please send them to Bob. He is a luddite but I will forward the email requests to him: contact: robertponeil(at)gmail(dot)com.

Hooray for a tiny house.
February 2011
“ALL GONE. Goodbye romance, goodbye studio, goodbye guest house. There is now a happy new owner of the tiny house. Our tiny house has been sold. A sad, sad, day, but a new tiny house shall spring forth.”
– susan