Mad Woman in the Forest 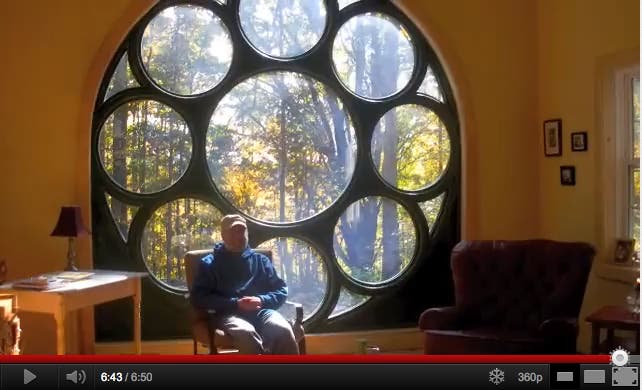 Take a look at that window. That glorious window was the catalyst for the design of Laurie Halse Anderson’s cottage in the forest. Laurie is the author of several young adult books and historical thrillers and she writes in a small cottage in the forest. She expressed her need for a “room of her own in which to write fiction”, and her video from 2009 recounts the conception and building of her writing cottage. It was built over the course of a year by her carpenter husband and several of his friends. Laurie and her family wanted it to be off-grid, made with reclaimed materials and easy on the environment. That amazing window (which Laurie called “a magic window”) was found lying up against a barn and turned out to be a church window from the 1800s. Custom glass was made for each round section of the window. She and her husband also perused the salvage yard and found old growth pine boards to use for the floor and chimney pots for the roof. Soybean based foam insulation was sprayed into the walls and the roof is Vermont slate. The house is powered by wind and solar. Nice cottage, but her stilted and uncomfortable narration was so distracting that I had trouble paying attention to the build.

It’s hard to believe that a woman with such a poor command of the spoken word can go on to enjoy a career as a writer.

Remember when your mom told you that if you can’t think of something nice to say, don’t say anything at all? No? Well, I’m telling you now.

If your criticism is not constructive, it’s pointless and mean.

This place is gorgeous and I am super happy for her getting a room of her own! How wonderful to be loved by a man who can show it in such a concrete way. Very moving.

Except you’re not his mom and it’s a crap theory anyway. Only pleasant things should be said? You get pretty unpleasant while you go around snapping peoples’ heads off.

really? This is a ridiculous comment. The job of a writer involves putting words down on paper, which usually has absolutely nothing to do with the spoken word.

Are you next going to require “good” actors to pass a writing and spelling test?

If it were written, he might have a point, actually. I think it’s easier to write than speak and they are totally different things. Stephen King commented once that people are surprised that some writers are completely incapable of speaking clearly and without fumbling.

the first two words of your comment are the only ON TOPIC COMMENTS YOU HAVE MADE. DIscussing the owner would not be too unlike discussing the color of the dungarees of the builder or if his beard was pink and purple or that you cant figure out if your name is joey or joe! None are constructive and none relateg to the subject cottage.

When comments are taken personal, they are FLAMES and unacceptable in most discussion boards and real life….. And, you’ve made the comment so early in the string that everyone reads it…and you taint the jury…..

I love this cottage. It will definately be on my wish list. Good luck with your writting in such a zen place.

I enjoyed the video presentation and liked the woman’s voice and her story telling.

wow- bizarre- and far bigger than I thought from the thumbnail photo on facebook. The window makes it look like you’re inside the chamber of a gun…..wow….a really unique window. -Deek

….or inside an old rotary dial telephone….

Deek, I wouldn’t have ever thought of either of those images and now have to go in the woods to get them out of my brain!

It reminded me of a window on the Death Star in Star Wars; but I really liked the design.

Like Deek, I also thought about a gatling gun.

She speaks like a poet of prose. Lovely lady, lovely family, and a wonderful house!

I can see stained glass in that fabulous round portal.

oh good lord that is gorgeous!

There’s nothing wrong with her voice! She sounds like a normal woman.

And, what a beautiful room to write in!

That is one really nice design. I can see how it could inspire one to write in it. Magic window? Perhaps more a ‘portal of inspiration’?

I can definitely picture sitting inside that window while writing, or reading. Nice! The only thing better would be if it was up in a tower.

Good video, very moving.
The cabin is great. That window definitely makes the whole place special. Love when people find things like that.

Thanks for posting. Nice cabin. Ignore the troll.

Wow, quite moving and beautiful. Thank you. Now I will have to check out her books.

And a really nice build: super jealous of the window!

Beautiful build! The way the window has been reused is inspirational. We are planning a much smaller summerhouse to incorporate an old gotic window, nothing like the size of this one but only 5ft high, in a similar position in the gable end – was going to have coloured glazing, but now I’m thinking maybe clear…

Love this cottage! And I too thought her narration was lovely and poetic!

Oh my, oh my, a lovely space and I had found myself thinking how I’d love to hear her voice narrate one of her books! Then I read your nasty comments and was “under”whelmed. Trust me, kiddo, it’s just you. Meaning, the voices are in your jumbled head! Wish I had that group of people to help me enlarge my storage shed into a wooded getaway. Yippee,

I loved the video- very well done! I love the house, especially that wonderful window! I am so sorry for the loss of your loved ones. I lost my dear mother in 2004, and I still grieve for her every day, so I know what you are going through. Writing is a good way to cope with loss, though. Hope you write many lovely books in your lovely little house in the woods!

Just wanted to tell you how lucky you are! You never gave up on your dream to have a place of your own! You and your husband must share a very strong bond and love for all that you do for each other!

What a lovely place to write! That window is phenomenal!

I’m eco-friendly so I’m gonna cut down all these large, beautiful trees to build my second house just for writing. LOL.

It IS a nice house however. I’d be tickled to have it. Will keep looking in the info to see how big it is overall.
Sorry for your losses of loved ones. I’m with Dawn, I miss the peeps I lost everyday.

You are so fortunate to have someone and people that love you to help fulfill your dream.

OSB and a vapor barrier? Yecch.