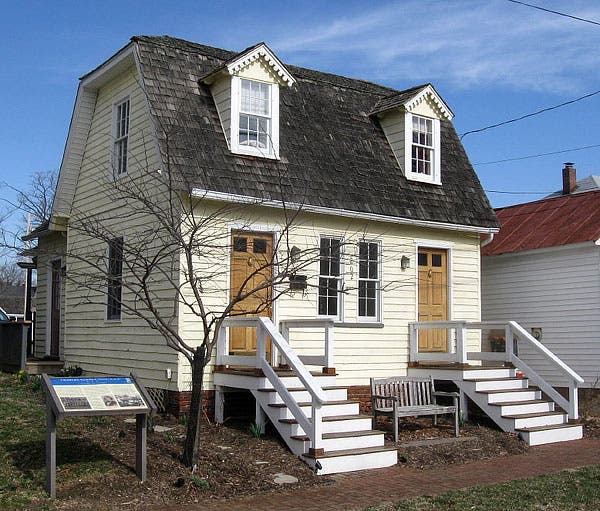 Jock sent the attached photo of a little house in Maryland. The home was originally two tiny houses, an early 19th Century duplex, in the picturesque old colonial town of Chestertown, Maryland. This miniature structure once housed two black freedman’s families (the shed roofed room in the back is a more recent addition).

The owner, a single guy, gave Jock a tour which included the small but habitable living room and a separate functional tiny kitchen. Across from stairs leading up to the bedroom under the Dutch gambrel roof, he showed Jock a window-sized hole cut in an interior wall.

“Guess what the hole was for?” he asked. Not a dumbwaiter. No window there, and no reason for a window to be there. What, then?

Turns out the only way to get any furniture, especially a box spring and mattress up the twisting tiny stairs, was to cut a hole to maneuver the back end.

Thank you for sharing Jock. Were any pictures of the interior taken that could be posted? I’d be curious to see this “hole” for moving in furniture.

I have written to Jock to see if he has any or can get some for us.

Hi, I’m the owner of this house. A friend of mine just found this blog post online and shared it with me.

I’m so glad OP enjoyed the tour. I have done a lot of work on the outside of the home since this photo was taken. A link is provided below.

Here is a link to the photos of the inside and out. (you’ll have to copy and paste the link in a new browser window unfortunately).

I can see the advantages of flatpack furniture, futons and foamies. I would love to have a little place like that to share with a friend in the original duplex configuration. Yes, please, interior photos!

Flat pack furniture is the only way to go.

I have a king-size bed upstairs, but it completely disassembles and there is not standard box frame. A ‘normal’ bed larger than a twin would be impossible.

I also find that higher end furniture can be taken apart and re-assembled upstairs pretty well (and holds up better than IKEA). For instance, a small table can go up in two pieces (top, then base) with little trouble. Chairs are easy enough.

Such a cute place and clever solution.

What a great little duplex!

Great place! It looks about the same size as the small house I’m building.

Beautiful house. I like the bench out front, too.

Chestertown, Maryland is my home town!!! I’m proud to say there are many tiny historical houses located along the shores there. Thank you tinyhouseblog for putting a smile on my face yet again!

Although this was a duplex, it made me think of a fun fact about small homes with two front doors here in Maryland.

Due to a religious tradition particular to the area, some homes that are very old you’ll still find with two front doors, even though they were single family homes.

Although people had tiny homes with not much room, they used to devote an entire room JUST to the pastor, so that when he visited, he wouldn’t have to see the rest of the house. This was a formal living room, just for visiting with the pastor each Sunday when he made his rounds. There was fancier furniture and special sets of dishware just for this use.

Given the fact that homes were meager, and sometimes the kitchens (for fear of fire) were separate from the house, along with a separate outhouse, it is funny to think that the precious square footage would be devoted to a single-use like that. But its true!