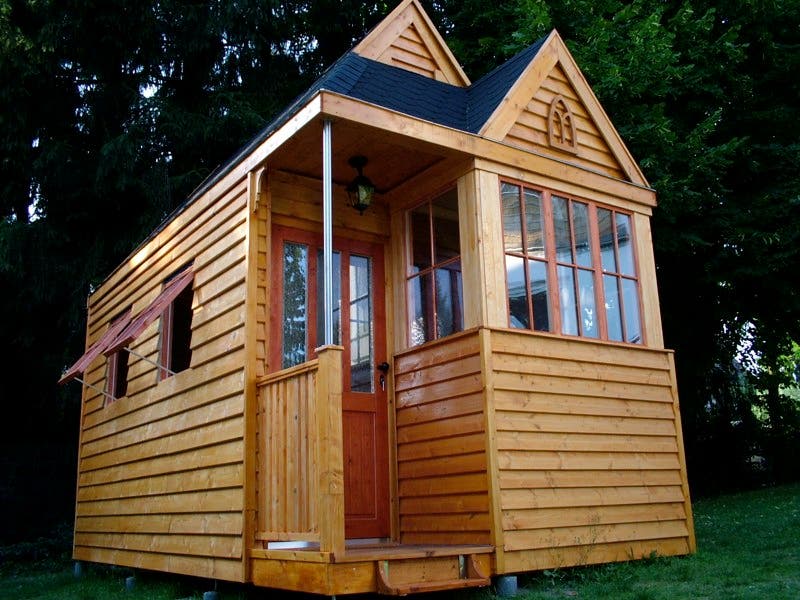 Kai Schaede from Germany recently emailed and shared his Tumbleweed Tiny House Company WeeBee build story with me and I wanted to pass it on to you:

Building the WeeBee is the way I took on the economical crisis in my own life.

My name is Kai Schaede and last year I took a look at my past life and asked some questions. Have I done everything right? What could I have done better? I felt I needed to make some major life changes. Maybe you know what I mean? I am a dental technician and have my own business, which has not gone so well. Just the normal ups and downs of life. So I didn’t mind reducing my lifestyle and spending less. So why not start this with my home.

A trailer in my backyard would do but I don’t like trailers that much. I always wanted a house made of wood – something very uncommon in Germany… houses have to be made out of stone since they are for life here. Germans don’t sell their houses very often 😉 I am a sailor too and a bit experienced with living in small places, I love it. If I ever win some lotto I would live on a boat.

So the idea of combining “small” and “house made of wood” came not by chance. by the way… the green idea behind it all came much later thanks to your blog, Kent, and is now one of the leading aspects of my life.

Luckily a set of Tumbleweed Plans was found on the British eBay and I bought them from a nice guy who unfortunately could not realize his dream of his own tiny dwelling.

To be honest, only the plans for the outer proportions were used, since I had to modify the internal area for my own purposes. The WeeBee sits on a pier foundation so I could build it much higher than on a trailer (4,30m – 14,11ft), the kitchen looks to south-west, the sunny side, no windows on the other side to make space for cabinets/shelves, 20 gallon fresh water tank under the ceiling in the bathroom for gravity feed, and a cathedral ceiling above the living room. You’ll notice the height when looking through the door, the high built in  front window does the proportion trick. Speaking of building process… it was a challenge indeed! An experience I would never want to miss out on! I was not experienced with carpentry and got most of the theory from Prof. Marshall Brians homepage HowStuffWorks.com. It was a three month learning by doing process – every day after work and every weekend – and is now like an obsession… I would gladly build a few more when my bathroom is completed this April. Luckily for me I have another bathroom in the cellar of the other house I was living in. Since last September I have been happily living in my tiny house and have to say that every minute in it is like holiday. Even in the cold of winter.

These houses are energy efficient when well insulated! Currently there is a electric convection heater (500W) at work until I’ve saved some extra money for a propane heater. We had -28°C/-18,4°F in early January at night and it was warm inside with only 500 Watts running two times in an hour running for about 10 minutes! Unbelivable… I would like to see more people in these tiny houses. But you know, Europe is another continent, especially the Germans are very amused when tell them that I’m living in a 110sf house in the backyard – until they come and look and have a good time 😉

These houses have so much potential and I would be happy if my pictures would be a motivation for all do-it-yourselfers who are in doubt. Anyone who can handle a jigsaw, a hammer and a screwdriver can build his own tiny house… it’s easy!

To view all of Kai’s pictures visit his excellent site, it is in German but like they say a picture is worth a thousand words. It’s great seeing all the Tumbleweeds houses. I love the variations.

Two things strike me as funny or human nature perhaps?

The little arched window in Jay’s house has been incorporated into most houses, even though its more expensive than a square window. Even the house above has a little cutout window.

Also the fact that I have yet to see pictures from a Tumbleweed house that has painted walls. Does everyone have the very same “all wood” taste?

Hi EJ – It appears that way. I have not seen one painted or done any other way either. I was talking to Jay yesterday and he mentioned that he would like to see someone do a modern take on his designs but he has not seen anyone do it yet. Maybe someone will jump in and try it…

See Mark’s tiny house in WA site off of the Tumbleweed website. It’s a modern take.

What a neat house. I love the efficiency of the kitchen. It’s amazing what a little height will do for a spacious feel even in a small room.

To read Kai’s pages in English, use Babelfish. Put in the web address, select German to English, and Bob’s your helpful uncle. Here is the link:

Thanks Lauren, I appreciate the tip and hope the readers will follow through with it as well.

Oh, and Kai? Place it on a pontoon float and there’s your houseboat.

[…] Kent, over at tinyhouseblog.com, posted a story about a fellow named Kai who has built a modified Tumbleweed WeeBee in Germany. I spent quite a bit of time looking through all the great construction photos that Kai has posted […]

[…] You can read more about this tiny house at TinyHouseBlog.com. […]

That is Awesome! I love the little “mail box”.

Great little house. I could not help but notice the Mac Mini too. Low impact all the way.

Is that house legal where it stands, Kai? I’m from Germany, too, and I know that in my town you wouldn’t be allowed to build a house / garden house of that size in your backyard. Great work, I might soon follow your example!

I think part of the “all wood” thing is that the cost of doing so with a full sized house is simply too high, not to mention the upkeep of the wood itself… With the tiny homes, achieving the warmth and beauty of all wood is much more affordable.

This is awesome! I live in Italy and I’m planning to build my own but, as you said, Europe is a different continent. Tiny houses have so much potential in terms of money, space, environment. I love them. The Tiny Movement has changed my life.

Looks like Kai has started his own company on a variation of the “Tiny House” theme. Good to know as I was wondering how to adapt the houses to German standards!

Ely, I’m afraid thats not me but a lame copycat.
Meet me at casakaiensis.de
🙂

The company who produced those plans discontinued them and refuse to give them to me. I want to build it too but I can’t get any plans