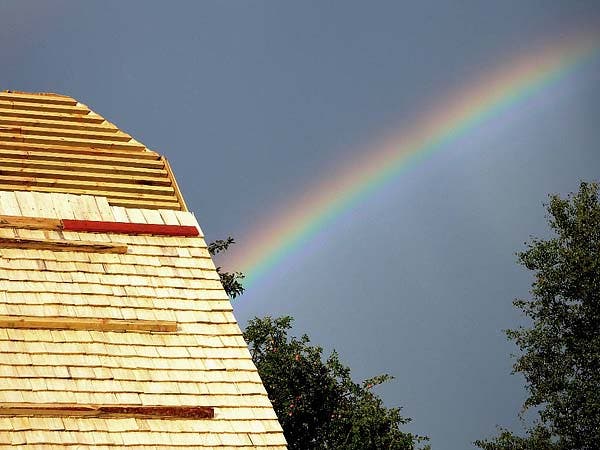 So my building season has ended. The outside, barring a few details, is finished.

The last article ended with me getting ready for the roof. They do wood roofs quite differently here than in the USA. My roof is a blend of the two systems. The only problem encountered was to make the person installing the shingles understand American methods, which I preferred for aesthetic, and other, reasons.

Still, in some details I deemed the local wisdom to be better than the American approach – doing things as quickly as possible- and although language was a barrier we still ended up producing a wood roof which I consider to have the best of both country’s methods incorporated.

As an example, where in the USA such a small roof would be completed in one day. This person and his helper worked a full seven days on the roof and as much time splitting the shakes. He seemed to care where every shingle was placed. The roof is made of Aspen, a tree similar to the American variety in leaf, although the bark is darker. It is a traditional roofing material here. I am not completely convinced that its lifespan will be equivalent to Western Red Cedar. We shall see. They tell me that such roofs can easily last 35 years which will certainly be long enough for me!

As the roofer was progressing I began the task of siding. This began with a layer of 2 in. extruded polystyrene insulation set between 2×2 furring strips. This was followed by a layer of wind/moisture barrier and then additional furring strips to create an air-space behind the siding. Lithuania is a wet climate. Taking extra steps to keep things dry is essential. Taking extra steps to keep things warm is also essential. I also installed the columns out front. Solid 8x8s freshly milled from logs, so I had to be quick to get them painted (stained) on all sides and in position to limit splitting and twisting. I was pleased with the way the columns connected to the bases. I like things clean and simple. Next came the siding itself. Red Pine is the only wood used in this house. In the USA it is called “Scotch Pine.” Here there are great forests of Red Pine, and they can be very beautiful. The forest floor is covered with blueberries and mushrooms in season. You might think that such forests are too beautiful to be cut, but they take very good care of their forests here. Forests are sacred to the people, and the economy of this nation. They have all been cut many times in the span of civilization of this part of the world. The Siding goes on. After an extensive search I found a company here representing a German paint manufacturer, who had the stain quality, and color quality I was looking for. Red Pine is not a wood which can stand outside on its own, and a deep penetration stain of the highest quality was necessary. You can see the fascia and posts already stained, prior to applying surrounding materials. I am essentially lazy. I know how much work it saves to apply paints and stains at the right time. The sooner wood is protected from the sun, the better.

One day I got in the mood to build the front door. Notice the strange keys… The front door minus glass, with one coat of stain.

At this point the summer was coming to an end, indeed it was already fall, and I was almost ready to stop for the year. Still, I needed shutters and windows…and I had some time for some fun… And finally the windows arrived…and everything was far enough for this year. Amelia A Tiny House with a Big Dream

Beautiful, I would like to know the dimensions and how you will lay out the inside.

Love the details! Curious why the front posts are all different sizes–just for fun? Would also like to see the interior layout. Nice job!

Probably an optical confusion. The posts are equal length, distance to ground is not as it slopes. I so admire the marvellous craftsmanship on this house. The trim details are wonderful.

Yes, they are solid 8X8’s… 20cm X 20cm posts of red pine on concrete bases which vary in height as the ground slopes. Way too large for the loads imposed upon them, but I like a solid look and feel, and large pieces of wood. As the house faces south by southwest I am considering glassing in this front, but I think it would distinctly lessen the cuteness… I just make this stuff up as I go. In any case I want to spend next winter there, so I need to get busy on the inside, and other issues… like running water somewhere on the farm… work in every direction. Overwhelming sometimes.

Wow,this house is beautiful. I has the look and feel of something from a fairy tale.

Love the mountain design over the door and the cool shutters.

Great Details !!!!!!! I love the stain and colors you have chosen

You are a Craftsman! LOVE the roof, I call this a broken hip. It adds such character and fits right into the landscape. The Forrest is absolutely breathtaking, wish they took the same care here in the States!

Re: the pic of the rigid foam and weather wrap… Doesn’t look like you’ve used any exterior sheathing. Is there another system in place to act against wind shear?
Beautiful little structure!

Yes, cut-in angle bracing between the studs, both directions, all walls. Structural plywood is not available here. If I could get 5-ply doug fir 1/2 inch plywood….. there is plenty of good quality OSB board here, but I don’t like how it smells. Why build a house with something that smells bad?

Love love love the shutters!! Along with the rest. Nice job and the time your roofers took looks well worth it. Looking forward to the next round; congratulations, you are creating something strong and beautiful. Thanks for sharing it with us.

Absolutely beautiful; I love it!! I want one just like that one!

I thoroughly enjoyed the detailed “virtual tour” of the way you built your home!

Absolutely beautiful. You must be very proud of all the hard work that you put into building this.

I love the details above the door and the little hearts on the shutters. Would love to see some interior shots as soon as you could that would be great to see.

What about that door!!!! it is awesome.
New to this blog, but I am glad to hear ‘out of the USA’ ideas and actions are happening. Well Done Dan

It is quite beautiful. Thanks for sharing it. : )
Namaste

OMG. I want to live here. So adorable! Great job!!!! Ever need a house sitter call me. I promise to only steal dimensions! 😉

How do we simplify? Let us count the ways. | Exopermaculture - January 9, 2013 Reply

Great design and craftsmanship. Thanks for sharing.

For the past 6 or 7 years I’ve been playing with the idea of buying a house in Bulgaria. Then I went there this summer and thought – it’d be Way Too Hard to do the fixing-up a super-cheap Bulgarian house would require (visiting Bulgaria was like experiencing time travel. Honestly).

I wonder if a tiny house is the answer? I’ve found potential work there, but need a home. Your tiny house has got my imagination working again. Maybe Bulgaria is still my answer! Thank you so much for this post!

Throughout Eastern Europe small homes are common. This one measures 4 meters by 6 meters. I don’t have to drive very far to find much older homes of a similar size. There are many more issues to consider, however. But, any person with energy and an open mind can learn to do what needs to be done. I know what you mean about time travel. These days Lithuania is making great strides as far as catching up with the west. Which has its downsides, too. Having the courage to go in before it is popular means you will get a better deal… but I have heard Bulgaria has some significant corruption problems. This would mean learning to give bribes, something I had a very hard time with- altho those days are finally, thankfully ended in Lithuania. Anyway, I am no expert. I can give lots of advice to a person wishing to move to Lithuania, and I would recommend it!

Beautiful! I like everything you have shown us about this house. Congratulations to you on a fine piece of work, and may you have much peace and happiness in it.