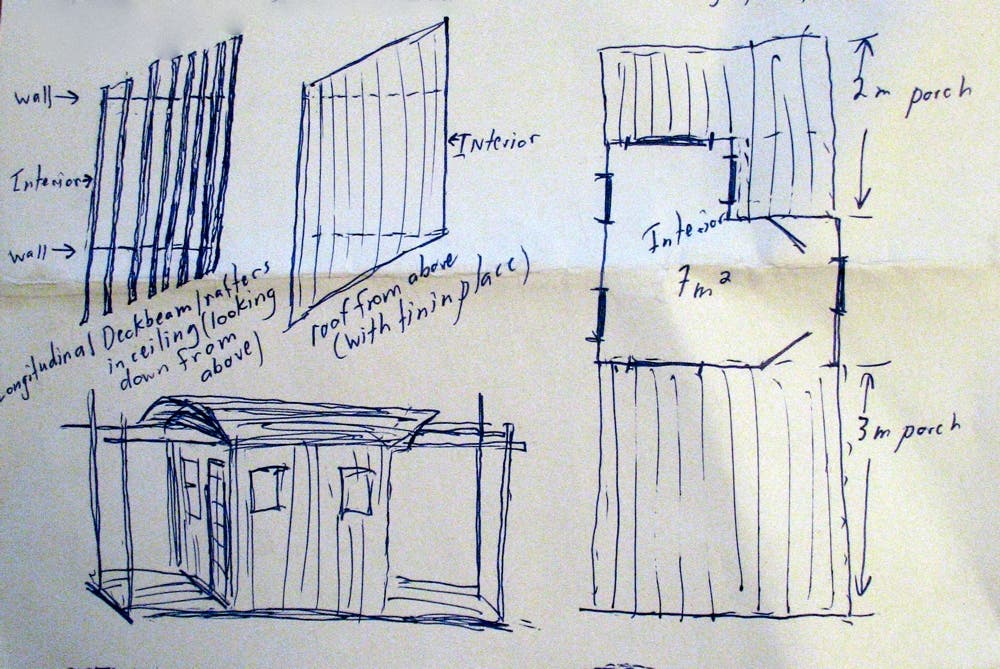 Bernie Harberts sent me a note about his new project and I wanted to share it with you. Go here to visit some of his previous projects. I’ll turn it over to Bernie and let him give you the details.

I ordered a set of the Sonoma Shanty plans back in July, bought a 26′ flatbed trailer, and, well, that’s where I swerved from the plan, ditched angles in favor of curves, and began my Shell House construction. I’m a few weeks away from wrapping up this project but thought I’d send you some construction shots. Curved lines have sheltered me in my adventures for over a decade. I spent 5 years sailing my steel cutter “Sea Bird” alone around the world, living in a floating home of curved hull and cambered deck house. Then came a 13-month stint living in a tipi while traveling from Atlantic Ocean to Pacific Ocean by mule. Followed by another 13 month trek from Canada to Mexico in a tiny wagon (I sent you short a piece on this earlier). All these homes featured round lines.

When I got back to North Carolina from my latest trip, I started building a tiny mobile studio. Bought a 26-foot trailer. Laid out the floor. Raised walls for a Sonoma Shanty. But when it came time to raise the ridge pole and rafters, it struck me I’d strayed from the world of curves that had take me so far. So I came up with my own design of a cambered roof with tapered overhang. The roof design is based on the New Zealand green-lipped mussel I encountered in my 1 1/2 years in the Land of the Long White Cloud. That’s why I call it the Shell House. Instead of using a computer to design the roof, I just wrote friends of mine a letter telling them what I was doing. Doodled up some sketches. Then, using a batten cut from a piece of heart pine flooring, I drew the roof line I wanted onto a piece of plywood I used as a template. The eaves are tapered on both sides, ranging from 18 inches over the back window to over 36 inches over the back door. Roof beams are 1 by 6s insulated with solid foam. Tin was secured on the bias, giving the roof the strength and spiraled texture of a mollusk. The Shell House features more porch than heated area. Inside it measure 75 feet. Porches will cover over 120 feet. Front porch will be made of locust boards salvaged from an old farm house. Tough stuff. Hard enough to stop a .22 bullet depending on how far away you shoot from. Stands up to weathering really well, too.

One of the things I noticed with such a long trailer (26 feet) is that the tail sagged. To solve that problem, I installed a chain and spreader support, much like you’d see on a sailboat. One end of the chain attaches close to the of the trailer. The chain then runs over a 2-foot upright steel post just in front of the wheels and continues to the front of the trailer where it attaches, via a turnbuckle, to the front of the trailer. By tightening the chain, I’ve eliminated the sag I bet plagues a lot of trailer-based tiny homes over 15 feet long. Most of the assembly is hidden in the wall. What juts out onto the porch I will feature as proudly as standing rigging on an offshore sailboat. Walls are insulated with blue foam on both sides of the studs to break thermal bridge. Siding is metal. Windows are wood and metal clad double hung and casement Pella and Jeld-Wens. Solar power is planned. Building is wired 12 volt DC / 110 volt AC. At present, I’m wrapping up the interior. I’ve paneled it with 6-inch wide painted white pine paneling. Floor will be tongue and groove southern yellow pine.

So there you have it. I’ll drop you some photos when the project’s complete. WOW incredible house. Love the roof and chain support in the wall. I wonder if that will work over time. I guess it would work just fine… definitely unusual solution but innovative thinking.

Looking forward to seeing it complete and how the porch works out. So many tiny houses use every square inch of the trailer, nice to see another example of tiny house with a real porch.

I am so completely sold on tiny house living. If only I could convince my guy. sigh.

I’m curious, why build tiny home trailers with wood in the same fashion one builds a home on a foundation?
As much as I like the architectural approach, I think the chain stay treatment through the studs is going to be a problem on the road especially without a sleeve/ guide to prevent frame damage.
Chains stretch and as the once former auto trailer (?) flex’s and twists as designed, what is this going to do to the walls?
When trailers are designed, they are designed for a specific purpose. Going outside that original purpose can have some un-intended results over time.

Two note worthy books on trailer design and fabrication anyone considering this should at least read to have a better understanding of what’s going to carry your tiny and not so tiny home; Trailers- How to design and build them by MM smith volumes 1 &2, IASBN # 914483-32-3

Neat idea. However, using rigid foam on both the interior and exterior of the outside walls is a mistake. If water gets trapped in between, it cannot dry out and can cause mold and rot. Instead, put both layers on the exterior. See this article [1] for more info.

I love your design on this tiny home! I would love to see some pictures once your completely finished and on the road.

I am sold on Tiny houses also, but cant convince the wife!

[…] What juts out onto the porch I tinyhouseblog.com […]

i have three houses to be built in miami.I need a contractor to build the shell for me. shell to include walls, roof, doors and windows.

I need to build four homes in miami. I need someone to build the shell, that is walls, roof, doors and windows.

[…] Last time we communicated, I was working on the Batch:http://tinyhouseblog.com/stick-built/bernies-shell-house-project/ […]