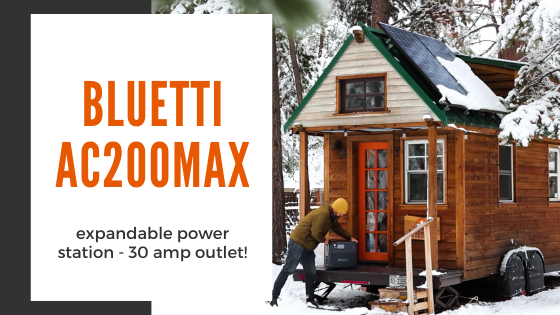 Does a tiny house power station exist? The Bluetti AC200MAX seems to fit the bill with a 2048WH base capacity. That’s more than double the power capacity of most available portable power stations. Impressively, it expands four times beyond that!

On its own, the AC200MAX is capable of powering our 20-ft tiny house on wheels that can be plug directly into its built-in 30 amp outlet. But how long will it last? Well, that depends. With everything we need to run, we could get by all day and night and into the next day.

Keep in mind our tiny home only requires 15-20 amps to power everything. So if yours has more significant energy needs, it wouldn’t last as long. The key is ABC, always be charging the AC200MAX power station.

We’d want to max out the solar input to power our tiny house on an ongoing basis with the AC200MAX. Currently, we only have two 150-watt panels, but the AC200MAX can handle up to 900-watts. The cool thing is the AC200MAX uses a universal MC4 connector so that you can connect pretty much any kind of solar panel. Bluetti offers some, but there are many other options out there.

Watch the review to see how the AC200Max stands up to the tiny house power station test!

By maximizing our solar energy input into the AC200Max, we could be practically worry-free for our off-grid power needs. Fifty amp tiny homes, on the other hand, could be carefree with the expansion batteries. For extra capacity, you can add up to two batteries. Bluetti offers a B230 expansion battery module that expands the total capacity of the AC200MAX to a staggering 8192Wh. Again, we can plug in our entire 30 amp tiny house into the AC200Max. So that means we can run full capacity with all our lights on, all appliances running, laptops plugged in, and TV on. This is where knowing a time estimate for how long all that can run simultaneously would be helpful. Instead, we have to monitor the power percentage on the AC200Max. Other portable power stations provide percentages and a time estimate for how long it will last. Fortunately, Bluetti could update this feature on the app at some point.

Because we have access to shore power for our tiny house, we don’t need to rely on AC200MAX continuously. But if the power goes out this winter, we’ll be in good shape.

Right now, the most important things to keep running are the water pump in the property’s pumphouse and two 120V appliances that are plugged in 24/7. First, our electric oil radiator heater; uses 1500W max. Second, our mini-fridge uses 50 Watts and runs about a third of the day, so it uses about 400 total watts in a day. When these two turn on, there is a power surge. So you need a power source that can power everything and handle the surge. The AC200Max really shines here with an incredible 4800W surge capability, also called peak power.

While we’re charging the AC200Max with solar during the day, we don’t have to worry about power usage. Importantly, we usually put the heater on low at night, and the fridge doesn’t run as much, so we’re not using power as much and should last during the night. And once the sun comes up, we’re charging again!

With running our appliances and laptops, having a smooth, steady voltage is essential for powering them safely and efficiently. That’s where the AC200Max’s 2,200W pure sine wave inverter is so handy. It converts DC power from our solar panels to AC to create power grid-like stability. That’s something not all portable power stations have. modified sine wave inverters are cheaper, but they’re less efficient and can even damage some AC electronics

And the charging capability really sets the AC200MAX apart. You can input up to 1400W total for recharging. Again, it allows up to 900W of solar input and 500W via the AC adapter. That means you can charge with a wall outlet and solar panels simultaneously. So it can be fully charged in less than two hours!

AC200Max is Powerful and Portable The AC200MAX is a portable power station, which means we can take it wherever we need power. Right now, that’s especially handy as we work on our shuttle bus conversion build-out. We really enjoy using it to run our power tools and a space heater at the same time.

Impressively, the AC200MAX has a whopping 16 outlets so that you can run all your things simultaneously, with no problem. For RVers out there, this includes a 12V 30A super powerful DC outlet and 30A NEMA TT-30 outlet.

While it is portable, it is pretty heavy at almost 62 lbs. Unfortunately, it doesn’t come with wheels and a handle. We use a small fold-out hand cart for moving it long distances.

So how much does this all cost? The AC200MAX costs about $2,099, so that’s about $1 per watt. That sounds pricey, but it’s actually on par or less than competitor models. Plan to spend about another $1700 to get their expansion battery.

Learn more about Bluetti AC200Max Expandable Power Station at the official website, and save big during Bluetti’s Power Week that ends on August 28th!

[…] comparison, Bluetti’s AC200MAX has more than double the power capacity of most available mobile power stations with its 2048WH […]