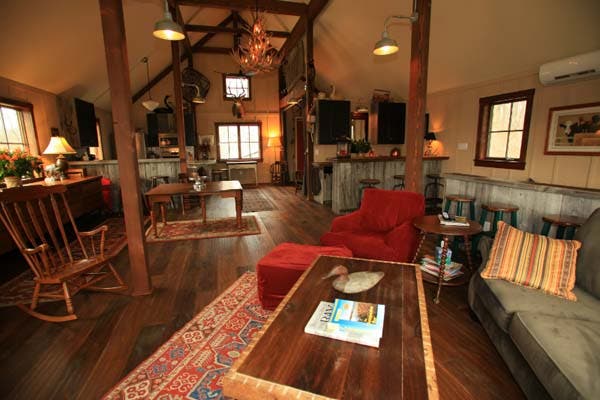 Yankee Barn Homes makes many plans and this one, called the Edgewater Carriage House, fits into the small range of homes that readers like to see on the blog every now and then.

“Yankee Barn Homes’ pre-fabricated concept is exceptionally eco-friendly, and a big time-saver, but you still get the beauty, strength, quality, and design flexibility of post and beam.” The Bieberich’s project, now named the Edgewater Carriage House, is 1050 square feet, one bathroom, and has one Murphy bed with privacy curtain enclosures and a ‘horse stall’ that houses double bunk beds.

I’ll let the photos show off the space and the included floor plan. 25’x35′ makes 875sf per floor, 1750sf overall. That’s not a small house by any reckoning. Of course, 700sf for a garage accounts for a big chunk of wasted space. Get rid of that and it’s a pretty sweet lookin’ barn.

The garage is for car or truck, motorcycle, atv, boat or other hobbies, garden tools, lawn tractor NOT WASTED SPACE

Yeah! Wasted? I think not.

I would need at least a 1/2 bath on the livingroom/kitchen/bedroom floor.

Love it, now that’s a place to be proud of. The open floor plan is fantastic. Great small home.

May not be tiny, but looks gorgeous and feels about the right size to me. There is enough room for the wife and kids there, without having to trip over each other. And while the bathroom is on another floor, it is at least far enough away that one does not need to broadcast to everyone one what you are doing in there.

I love this! My hubs and I run 3 businesses out of our small home. One of them is located in a large, finished storage shed on our property. This would be the perfect solution to house ourselves and all the businesses in the same space.

However, I agree with Angie – I’d need a bathroom on the upper floor. :o)

Beautiful. I think the horse stall bunkroom would be a winner with any kids. Where is it on the floorplan?

it’s beautiful and I love the open floor plan. but it really isn’t a small house

There is something wrong here… there are no garage doors leading into the garage. Therefore, we have to count “garage” space as liveable space and the square footage of 1750 sq ft means this is a BIG house, in MY opinion.

But, I am sucker for barns and this architectural style, so I will end this by saying, “What an awesome, rustic home!”

Wow, that is gorgeous. Love the bunk bed area and the garage would make a super workshop or gallery for a live/work home. Awful lot of unused overhead space to heat though.

They look great, but honestly their ‘turn key’ prices of 200 a sq foot and up??? No thanks..that IMO defeats the whole purpose of what the tiny house movement is about..

$200/ sq. ft. for a real house that meets code on a foundation sounds like a bargain. Have you priced out a so called tiny house on a trailer that meets code? If you find one you can be sure that the price per sq. ft. would be much higher.

Not everyone that wants small or tiny is price driven, some people will pay for something with a little style.

There is a dollar difference in living smaller and more efficiently than just stuffing yourself into a dry square and pretending and telling yourself it is a home.

The movement should not be completely based upon “cheaper is better.” There is more to it for long term considerations.

Beautiful! But does not seem small to me really…way better layout than my home. We live in a home that is 1175 square feet, with 6 kids. I joke sometimes that we almost qualify for your blog.

Thank you, Tiny House Blog! We will be celebrating our first Open House Event at the Edgewater Carriage House, which will be held on Saturday, June 22, 2013 from 12:00pm – 4:00pm, at the property in Edgewater, MD. To learn more about the event, please contact Yankee Barn Homes at 800-258-9786 or visit us online at http://www.yankeebarnhomes.com. You may also contact Jennifer Bieberich via email at jbieberich@yankeebarnhomes.com.

Your Carriage House not only looks cozy and rustic but also it seems to have enough space to devoted a corner to a fine arts studio.

Also, if may ask what was the price range to build it?

Finally, do you have well or rely upon city water?

Thanks for showing us your woodland fantasy house.

The floorplan of this house would make it adaptable thruout most lifecycles with the lower level available for extra bedrooms, an office, workshop, studio or even as a garage. That is an important feature up north.

The 850 square footage on the shown plan does indeed make it a economical smaller living space on the upper floor.
Smaller is good and not everyone in smaller living is broke and content with tool shed living.

The structure has clean exterior lines and definately has some architectural flair about it.

Glad to see something well built without an axle under it.

Love your blog, Kent, but this isn’t a small house. I really wish you would stick to the standards of what Jay initially set up with Tumbleweed (~800square feet as the biggest size for a small house). The whole reason I fell in love with this blog when it first started (yes, I’ve been a longtime lurker) in the first place was that you showcased extra-tiny to small.

Although I used to think I wanted an 800 square foot home a la the Tumbleweed B-52, I’m now seeing that even smaller would be a-ok. I know that you said that some people like to see these from time to time, but it actually makes me question why you feel the need to showcase a house this large when you have such a beautiful thing going with the tiny houses and getting people to rethink if they actually need something that’s 1000 square feet and larger.

Posts like this feel like they go against the ethos of the amazing niche you’ve carved out in the internet and instead of challenging people to think smaller about what they really need in their life (vs. what they think they need), the post instead slightly caves in to the dominant culture ‘s idea of bigger is better.

I happen to like this somewhat (larger) small house. Its very stylish & affordable. Its refreshing not to see a house with wheels & a license plate. If you want a Tumbleweed fine, but I do not. Lots of people read this blog for a variety of reasons. I think Kent & staff is doing a fine job.

I just don’t see how the occasional ‘small house’ goes ‘against the ethos of the amazing niche’ of this blog. There’s more than one way to view what’s appropriate in home sizes. I’ve been studying tiny homes for several years now, while evaluating what my family’s needs and wants are, and have come to the conclusion that “tiny” isn’t for me. Besides the unfortunate discovery that I have a bit of claustrophobia, we have other considerations: three family members with food and other allergens that require special handling, which means certain equipment and storage; I’m a piano teacher and accompanist, and need my ‘real’ piano; I’m a crafter for extra income, as a creative outlet, and to keep me sane; my husband has difficulty maneuvering small spaces and stairs. Please don’t try to force everyone into the same box, even if it’s a good one. What a boring world that would make.

We build affordable timber frames starting at $12 per sq. ft. Our motto is “Live Big-Build Small”

I really wish people would stop telling Kent what he can put on his blog. It’s very rude. And telling him that he needs to subscribe to someone else’s arbitrarily defined standards is ridiculous.

As for this house, if you take out the square footage for the garage, it is a small house. I love the layout, but I’d like a little clarity on the bed situation. Is the bunk room pictured actually where the regular bedroom is shown on the floor plans? Where is the murphy bed with a privacy curtain?

I love the way this is decorated. The cool grays, offset by the warm reds. The way stools are set up in multiple areas makes it look like they’re ready for a party!

Kent, thank you for this post. I love this design. While some may think it’s too large, I feel that one could still incorporate the design elements but on a smaller scale.

Keep up the good work Kent!

That is so not a tiny house.

Yeah, definitely not tiny! And I don’t really go for the barn exterior look. But that upstairs great room is impressive, and well built from the looks of it.

When I compare the images with the plan I am left wondering what is going on. Take the kitchen for example – it is either twice as wide as the plan (and the bedroom non-existant) or the actual barn is bigger than the drawing suggest. The kitchen in the drawing does not have a return on the outer wall and barely has enough room for the sink and counter on both sides. Also on the back wall there is only room for a ref – but the image shows BOTH a ref (a big one) and a small comercial range as well as a huge counter/bar. The pictures indicate there is ample room between the kitchen and the bunk room and the bunk room is a relatively good size.

I would love to see a drawing of the barn (regardless of size) as it is really built.

Simply over the top! And yes, this is exactly what my wife and me want to build as our guest house (on five acres). Your bottom floor would be perfect for our UTV + pull behind mowing deck, rider mower and assorted tools we need for keeping up this place. If the staircase was straight up, it would still be handicap friendly thanks to a chair lift. Did you design the thing yourselves or did you find the plans and buy them? I’d love to get my hands on them and then tweak it a bit for our needs. Tiny homes doesn’t mean we’re supposed to live in 300 square feet or less. For many of us 800 – 1,000 square feet is still a smallish home that fits within the definition less is often better. WOW WHAT A HOME RUN!

Just one question, for us grandparents—are the bunkroom “stall” doors lockable from the OUTSIDE????